There’s no question there was significant human activity BY EDWARD THOMAS on Hilton Head Island during the pre-recorded history of North America 4,000 or more years ago. The mysterious shell rings from that era, preserved today in the Sea Pines Forest Preserve and Green Shell Park off Squire Pope Road, are testament to that fact.

When Captain William Hilton arrived in 1663, this 12-mile-long coastal island was occupied by a native tribe called Escamacu. They were part of the Cusabo Confederacy of Tribes that inhabited land up and down the nearby coastline.

Hilton was not the first European to arrive in local waters. Spanish and French explorers had already been seeking opportunities for settlement, but Hilton, an English sea captain, arrived from the island of Barbados where land was scarce. He was enticed by opportunities that had become available when British King Charles II granted an enormous swath of territory (stretching from Virginia to the Savannah River) to a group of eight loyal noblemen called the Lords Proprietors. They encouraged settlement by other Englishmen to secure the Land Grant.

Over the next 150 years the English, using Charles Town (now Charleston) as their base of operations, and African slaves as their labor force, slowly assumed control of this rich coastal land for cultivation of high-incomeproducing crops like rice, cotton and indigo. Hilton Head Island became known for its “Sea Island Cotton” which was first successfully raised by William Elliott on Myrtle Bank Plantation overlooking Port Royal Sound in 1790. The cotton gin was invented three years later, and by the start of the Civil War in 1861, the Lowcountry region was world famous for its cotton plantations.

Because the production and exporting of cotton, rice and tobacco was essential to the economy of the Confederacy, the Union military moved quickly to invade and occupy Hilton Head Island at the onset of the Civil War and used it as their base of operations to blockade Port Royal Sound, Charleston and Savannah. 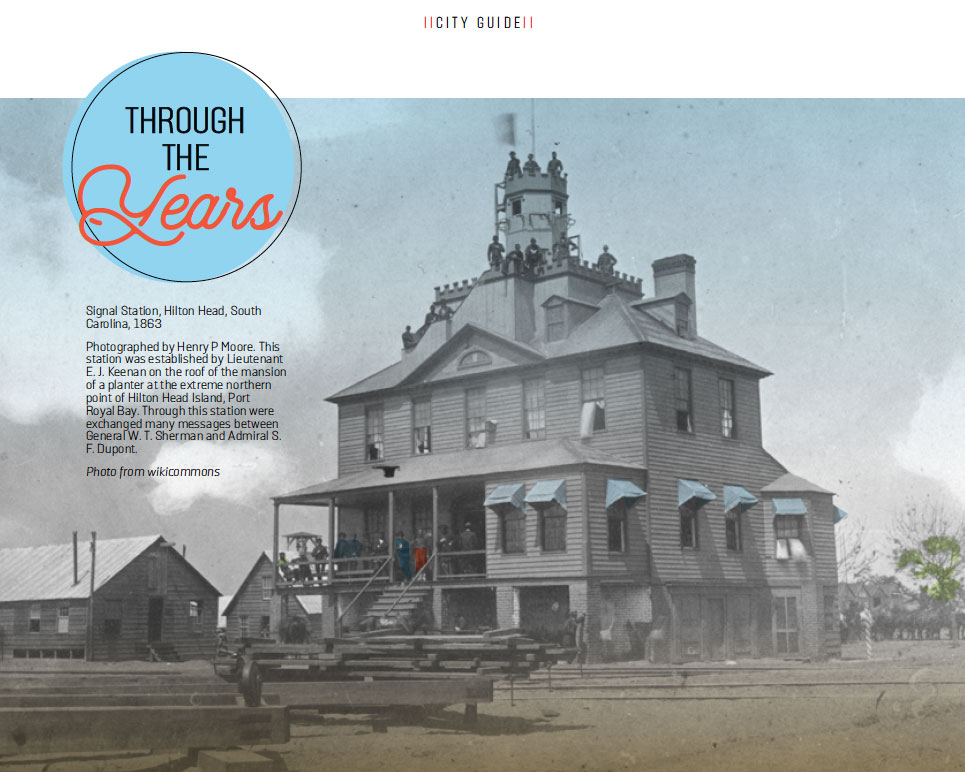 Photographed by Henry P Moore. This station was established by Lieutenant E. J. Keenan on the roof of the mansion of a planter at the extreme northern point of Hilton Head Island, Port Royal Bay. Through this station were exchanged many messages between General W. T. Sherman and Admiral S. F. Dupont. | Photo from wikicommons

Although President Abraham Lincoln had declared the Emancipation Proclamation in 1863, it was here on May 15, 1865 where the Commanding General of United States Department of the South, Quincy Adams Gilmore, declared “the people of the Black race are free citizens of the United States.”

A town called Mitchelville was established for the former slaves who remained. But without a bridge to the mainland, Hilton Head Island soon became isolated. Cotton was victimized by disease.

Mitchelville’s population of 1,500 dwindled to fewer than 500, scattering into tiny neighborhoods and subsisting on their own crops, fishing and oystering. Large tracts of land were also purchased by wealthy absentee sportsmen and investors for use as hunting preserves and timber harvesting.

But with the arrival of electricity in 1951 things began to change. A drawbridge from the mainland arrived in 1956, and the next year an enlightened young entrepreneur, Charles E. Fraser, set forth to develop 5,200 acres of his father’s timberland as a haven for retirees and vacationers and called it Sea Pines. 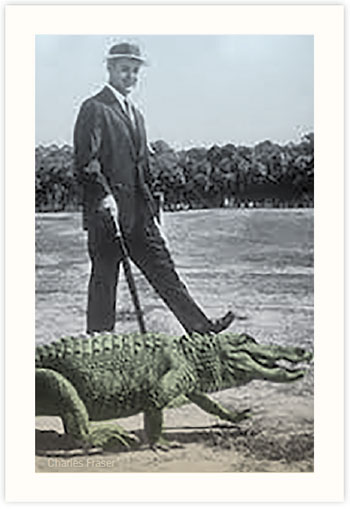 Using its broad Atlantic beachfront as its appeal, Sea Pines emerged as one of the first projects in America to combine golf and real estate development for a planned community. Its innovative, bold approach to establishing green space to remain undeveloped and thereby provide animal habitats plus amenities like walking and bike trails earned international recognition and became a template for modern recreational communities.

Fraser would often credit the discovery of air conditioning and mosquito control as key reasons for Sea Pines’ success, but savvy marketing and the exquisite HarbourTown Golf Links attracted the PGA Tour and global televised attention.

In the 1970s, Hilton Head became one of the first tourist destinations in the U.S. to adopt “Timeshare Ownership” to extend its seasons and in 1983 citizens incorporated the Town of Hilton Head Island in part to control land-management standards across the island.

Soon islanders John Curry, head of a newly re-organized Chamber of Commerce, and ad executive John David Rose originated the idea for a statewide accommodations tax (A-TAX) to boost both tourism and the arts, and with the help of Beaufort legislator Harriett Keyserling it became state law.

A-TAX has since aided the launch such tourism attractions as the Hilton Head Concours d’Elegance & Motoring Festival, the Coastal Discovery Museum, and Historic Mitchelville Freedom Park as well as helped keep the Hilton Head Symphony Orchestra and Arts Center of Coastal Carolina afloat.

In recent years Hilton Head Island has become one of the most celebrated vacation destinations in the United States. In November 2018, USCB opened its Hospitality Campus on the island.