LOWCOUNTRY A SOURCE OF INSPIRATION FOR BEST-SELLING AUTHOR PATTI CALLAHAN

For New York Times and USA Today best-selling author Patti Callahan, the Lowcountry is both inspiration and backdrop to many of her novels.

Nestled in her Palmetto Bluff home, she points to the comfy, white chair in her living room saying, “I do a lot of writing there.”

She also points to her dining room table and screened-in porch.

“It’s so quiet here,” she whispers. “It feels very mystical, like there are stories and secrets lurking around every corner.”

Callahan splits time between living in Bluffton and Alabama but admits there’s something special about this locale. The May River, the Calibogue Sound, and the expansive views all call to her when she’s away.

“From the moment I get here,” she says, “I’m more settled, more myself.”

Although Callahan grew up in Philadelphia and South Florida, her connections to the area began in her teens when she came to visit her grandfather.

Then she met her husband, whose family had property on Daufuskie Island. 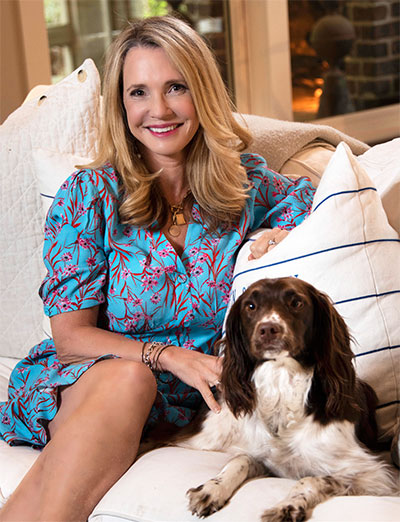 “I got engaged there,” she reminisces, adding that her two boys know our waterways better than the roads and her daughter went to SCAD.

Everywhere she looks, memories and history abound, but it took a bit of synchronicity to bring her latest release, “Surviving Savannah,” to life.

For years, Boo Harrell, a local mariner, encouraged her to use the ill-fated voyage of the S.S. Pulaski, a ship that sailed past our coastline and exploded off the shores of North Carolina in 1838, in one of her novels. Callahan declined. I don’t write about shipwrecks, she thought. Harrell persisted, even making her promise to read an article he had found. Afterwards, a bit of curiosity bloomed, especially when she learned that communities were so affected by the massive loss of lives that Independence Day celebrations were cancelled, and mourners wore black armbands for months.

Still questioning if the story was hers to tell, Callahan took a bike ride, stopping by the white picket fence near the river in Palmetto Bluff — a spot she had passed a hundred times before — only to discover that the inscription on the stone memorial mentioned that Samuel Parkman and four of his children had perished aboard the Pulaski. Was it a sign?

Then one morning at dawn, while scrolling through the Internet, she saw a headline: Steamship Pulaski Found!

Mental bells clanged. Her skin tingled. It was time to “dig in.”

Callahan has learned to trust her instincts.

“It’s not always clear, but when it is, I better not ignore it,” she laughs. “There’s something there.”

Finding her protagonist’s deepest desires is paramount, which happens through research and journaling.

“Once you know that,” she says, “the story begins.” Also important, are what poet David Whyte calls “the beautiful questions.” For “Surviving Savannah,” it was: How do we survive the surviving?

Since childhood Callahan has understood the power of story. Her father, a Presbyterian minister, introduced her to characters like Moses, Noah, and Jonah.

“Those stories,” she said, “keep you on the edge of your seat — I mean, If a whale could swallow a man and spit him out three days later, anything could happen.”

Hours in church, she shrugs, also taught her how to sit still and let her mind wander.

A lifelong bookworm, Callahan remembers getting reprimanded for reading too often. For fun, she wrote stories and designed book covers. Later, authors like Anne Rivers Siddons and Pat Conroy inspired her to dream about becoming a writer.  “I used to have this fantasy,” she confides, “that I was friends with Siddons and I’d give her story ideas … I didn’t think I was worthy of writing them.”

Choosing practicality, Callahan pursued nursing as her profession, earning a graduate degree and working as a pediatric clinical nurse specialist. It wasn’t until she was a stay-at-home mother with three kids under the age of 5 that she became determined to write “one” book. Ambitiously, she wrote from 4:30 to 6:30 each morning, joined a critique group, and took a few classes.

In less than four years, she was a published author.

With her nursing license now expired and 16 novels on the shelves, she readily admits, “Stories sustain me.”

She’s even added podcast host and co-creator of the online community Friends and Fiction to her resume, as well as recipient of The Christy Award in 2019 and the Harper Lee Distinguished Writer of the Year in 2020. Her next novel, “Once Upon a Wardrobe,” is expected to be published in October.

Asked if there’s an end in sight, she replies, “Never.”