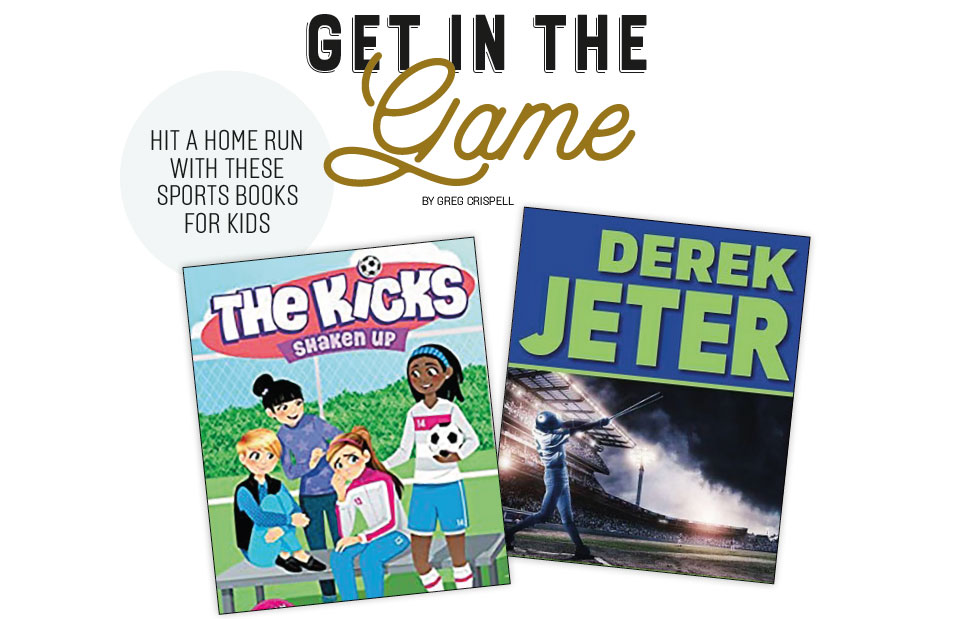 Whether you are a player or just a fan, sports can play a big part in our lives. If you need a sports fix, you can always turn to the bookshelves at the library to get back in the game. Here are some suggestions for kids who love sports and reading.

Yankees superstar and now Hall of Famer Derek Jeter has turned his childhood into a chapter book series. The first book, The Contract, talks of a deal made with his parents — keep up with his schoolwork or no baseball. The eighth book in the series is expected to publish this spring.

Alex Morgan, a forward on the gold-medal winning and World Cup champion U.S Women’s Soccer team, has written a book series called The Kicks. The series centers around a girl named Devin who moves to California and tries to turn around her school’s soccer team, the Kentville Kangaroos. There are 12 books in the series with plans for more in the future.

Tim Green is a former NFL defensive end who turned to writing after his playing career ended. He has written for both children and adults. His children’s book series, Football Genius, focuses on 12-year-old Troy White who has the special ability to predict football plays. There are six books in this series.

Jason Reynolds, the current National Ambassador for Young People’s Literature, has written a series of books about an inner-city track team. Each book in the series focuses on one of the members of the team. The first book in the series is titled, Ghost. There are four books in the series.

For those who like to read about real people, Kid Athletes might be right for you. This book features 16 short stories featuring childhood tales of famous athletes. Some of these athletes include Babe Ruth, Danica Patrick, Gabby Douglas, and Lionel Messi.

For many years, the go-to writer for sports fiction has been Matt Christopher. This author has written more than 100 books. He won the 1993 Milner Award. Although the author passed away in 1997, his estate has allowed his name to still be used to create new titles. So, whether you read a classic like Catcher with a Glass Arm, or a newer title such as On the Ice with Mario Lemieux, a Matt Christopher book will be sure to entertain you.Although he was not a professional athlete, Mike Lupica is an award-winning sportswriter that has been writing sports columns for more than 30 years. He has written about many different sports in his books for children. These titles include QB1 (football), Fast Break (basketball) and Heat (baseball). His newest books are a mystery and sports series featuring Zach and Zoe, with the latest title being The Lacrosse Mix-Up.