THESE TITLES ARE OLD AND SOME ARE NEW, BUT WE LOVE THEM JUST THE SAME

WINTER IS THE WARMEST SEASON by Lauren Stringer (2006)
Most people think summer is the warmest season. This story, however, is brimming with evidence to the contrary —from roaring fires to grilled cheese sandwiches to toasty flannel pajamas. A unique twist on the traditional wintertime picture book, the beautiful visual narrative follows a boy and his family through a day of hot breakfasts, steaming afternoon cocoa, and a festive candlelit party before bed. 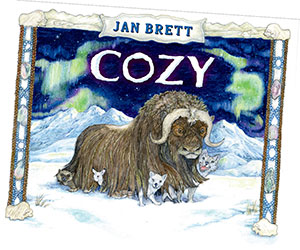 COZY by Jan Brett (2020)
Cozy is the softest musk ox in Alaska, with the warmest fur you ever did feel. When a storm hits while he’s separated from his family, he starts to feel lonely – but not for long. As the snow piles up, animals start to notice just how warm and cozy Cozy really is! One mama lemming has a bright idea . . . maybe the best place to spend the winter is under Cozy’s fur!

MALAIKA’S WINTER CARNIVAL by Nadia L. Hohn (2017)
Malaika is happy to be with Mummy again, and Mr. Frederic and her new sister, Adele seem nice. But being part of a new family means moving to a different country where everything is strange. It’s cold in Malaika’s new city, no one understands her when she talks, she misses Grandma, and the winter carnival is nothing like carnival in the Caribbean. This story shows the importance of family, especially when adjusting to a new home. 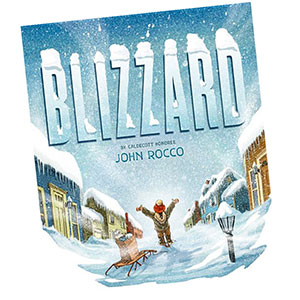 BLIZZARD by John Rocco (2014)
One winter day it started to snow and it did not stop. At first it was fun. But four days later, the snowplows still hadn’t come, cabin fever was setting in, and rations were running low. Someone had to take action. Will one intrepid boy be able to triumph over a fearsome blizzard?

SHELTER, by Celine Claire (2017)
As a blizzard approaches, two strangers emerge from the fog enveloping the forest. From the windows of their houses, the neighbors wonder: who is outside? What do they want? Desperate for shelter, the strangers turn to the locals, hopeful someone will take them in. “The wind is cold. In exchange for some tea, could we warm ourselves by your fire?” Will anyone help?

THE SNOWY NAP by Jan Brett (2018)
Snow is on the way, and as Hedgie trundles around the farm all his friends tell him of the winter-time fun he will miss as he hibernates: Icicles decorating the chicken coop! Lisa making snowmen! The pond turned to slippery ice! It sounds so amazing, Hedgie decides to stay awake instead of going to his burrow. But then a snowstorm starts. Luckily, Lisa finds him and brings him inside so Hedgie gets to see the wonders of winter from inside the cozy house.

COURTESY OF KATHLEEN MCTEER OF THE BEAUFORT COUNTY LIBRARY SYSTEM