State Rep. Jeff Bradley (R-Hilton Head) unveiled a proposal during a news conference Aug. 24 to preserve the existing Hilton Head bridge spans from the mainland to the island and transform them into an elevated, linear “skyway” promenade park that would stretch 1.2 miles.

Bradley’s concept is not an alternative to the nearly $300 million U.S. 278 Corridor Improvements Project that has been in the planning stages for more than two years for the gateway to Hilton Head Island.

Instead, Bradley’s plan would create an elevated promenade much like the High Line in New York City. It would run parallel to the U.S. 278 bridge plan, which received a $120 million state grant in July.

It would include bike paths and walking trails.

“I believe we have a once-in-a-lifetime opportunity to enhance, rather than destroy, the existing bridge structures and by doing so create a remarkably unique attraction for walking, jogging and biking that our children and children’s children can enjoy for generations to come,” Bradley said. 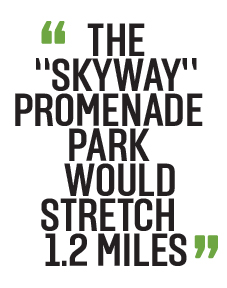 Mark Baker, President of Wood + Partners, an urban planning and landscape architecture firm based on Hilton Head, was excited when Bradley came to him to put together renderings. “His concept epitomizes and showcases Hilton Head’s reputation for environmental sensitivity and preservation,” Baker said.

Baker envisions the project as almost like a roof-top garden promenade with overlooks offering stunning views of Calibogue Sound, Pinckney Island National Wildlife Refuge and yachts moving up and down the Intracoastal Waterway.

Bradley said he began thinking that it would be a shame to tear down the existing spans that could otherwise be repurposed for something more desirable.

There are no cost estimates yet for the park, which would need approval by local governments, but if approved, construction experts believe several million dollars can be saved by not demolishing the bridges to the island; those savings could be transferred to a trust to fund the creation and annual maintenance of the park.

The corridor improvements project is not expected to be complete for about another six years, after which construction for the skyway park would potentially begin, Bradley said. “If we can stretch our thinking process, we can stretch that into a 1.2-mile parkway that would be open to pedestrians,” Bradley said during the news conference.

“We have a unique opportunity to grasp this asset and not demolish it.”