Felder Rushing, self-described “Southern garden guru” and host of the NPR podcast “The Gestalt Gardener,” is hitting the bottle — but not in the way you think. He’s leading a campaign to dispel “the same tired old history and lore” of bottle trees, the whimsical sculptures made from glass bottles — usually blue, sometimes green — placed on branches of metal or wood that dot many a garden in the Lowcountry.

Rushing, 67, remembers seeing his first bottle tree while shuffling barefoot down a dusty road on the banks of Mississippi’s Sunflower River when he was just 15. Since then, he’s photographed hundreds, not just in the South but all over North America, Europe, South America and Africa. After years of research, he published “Bottle Trees: … and the Whimsical Art of Garden Glass” in 2013.

“I’ve researched the subject until I’m almost sick of it. And no matter what I say, people keep saying the African slave thing,” he said by phone while soaking in a bath in England, where he lives when he’s not in Jackson, Mississippi. 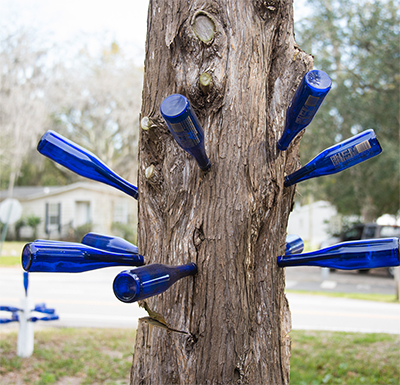 For years, Rushing subscribed to the “common thread of lore that dates the origin of bottle trees to the Congo area of Africa in the 9th century A.D.,” he said, and that they were brought to America by slaves. But his research found that the folk-art tradition goes back thousands of years and has ties to the Middle East and Europe.

“Bottle trees and their lore go back much farther in time, and originate farther north,” he says. “The superstitions surrounding them were embraced by most ancient cultures, including European.”

Rushing says that spirits known as djinns — the origin of the English word “genie” — were associated with glass bottles from their first creation in northern Africa and Mesopotamia around 1600 B.C., likely due to the mournful sounds they make when wind or breath passes over their open necks. Gradually, myths that hanging bottles in trees could trap mischievous spirits migrated north into Europe and south into sub-Saharan Africa.

Blue became the “color of choice,” Rushing said, because of its long association with calm and relaxation. But cobalt blue, a favored hue for bottle trees, is named after kobolds, mythical German imps believed to cause trouble for miners.

Meanwhile, the haint blue shade said to ward off spirits — “more concept than specific color,” Rushing said, ranging from “baby blue to periwinkle to blue-green” — originated in Europe, not Africa. Shakespeare even used the word “hanter,” meaning to “inhabit” or “stalk,” in “A Midsummer Night’s Dream.”

“Bottle trees became associated with African American culture in the South through a process of syncretization,” Rushing says. “People were bringing bottles over (from Europe) and throwing them away. Slaves picked them up to use as ornaments, incorporating Middle Eastern myths of genies in bottles. … The well-worn myth that they were brought from Africa is simply not  true, but because it was mostly Southern blacks making them, it was attributed to them.”

Louise Miller Cohen, 76, founder of the nonprofit Gullah Museum of Hilton Head Island, says that bottle trees and their associated lore were not part of the Gullah-Geechee tradition passed down in her family.

The woman she calls “Mama,” who was born at the turn of the 20th century and who raised Cohen from the time she was 9 months old, “never mentioned anything about the bottle tree,” she said. “And when people ask me whether the blue paint we have at the Gullah museum is to ward off evil spirits, I have to tell them that it was never mentioned in my household.”

But, she said, that doesn’t take away from the trees’ tradition.

“That’s not to say it wasn’t a tradition other places,” Cohen says. “But bottle trees traveled here from somewhere else.”