WEDDING BLENDS COUPLE’S HERITAGES WITH THEIR LOVE OF THE SEA

Hunter Anderson and Meena Rao aren’t from Hilton Head Island, but their wedding at The Westin Hilton Head Island Resort & Spa reflected their love of the sea. The beach has always been an important part of their relationship, and as they began to plan their big day, Meena knew she wanted the ocean to play a part. So they settled on Hilton Head as the perfect place for their family and friends to gather and celebrate. 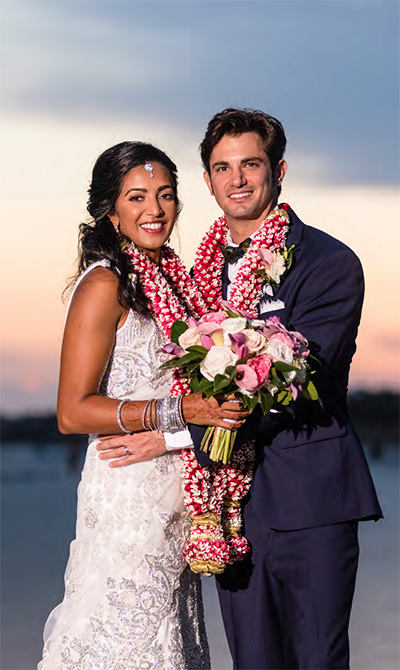 When Meena moved to North Carolina, she never expected to meet her future husband on her first day in town: “We actually met the day that I moved. The power was out in my apartment and Hunter lived close by. He saw me sitting on the balcony, waiting on the power to come on. He came over and asked how I was doing.”

They became friends almost immediately, spending time together and walking on the beach near their homes in Wrightsville Beach. Romance soon blossomed, and they moved in together in a house near the sound.

When Hunter began planning his proposal, he knew that their mutual love of the coast had to play a part. One night, he picked Meena up for dinner and asked her to go on a beach walk with him. She didn’t know that he had paid a local sandcastle builder to create an ornate, personalized castle with a special message. 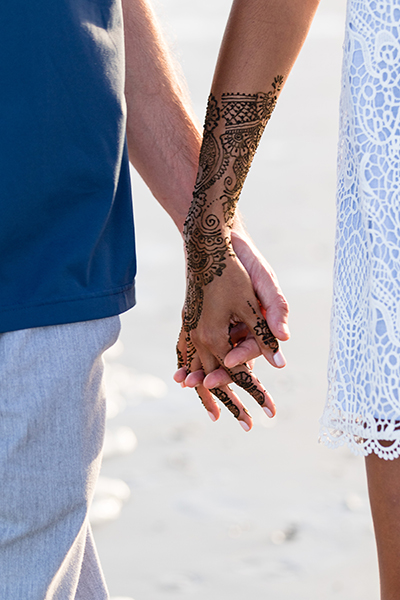 “I noticed a sandcastle that had ‘Meena, will you marry me’ written on it,” she said of the surprise. “Dolphins are special to us`, and he had two dolphins on the sandcastle. He dropped to one knee and proposed, right on the beach.”

They started looking for a wedding venue on the beach that could accommodate Meena’s family, who would be flying in from California for the event and staying for the weekend. One of her relatives had enjoyed a wedding on Hilton Head, so it began to be discussed as a possible destination.

Wedding plans incorporated many family traditions. Meena’s family is Indian, while Hunter’s mom is of Lebanese descent and his dad is from Eastern North Carolina. The food for the rehearsal dinner included both Indian and Lebanese dishes. 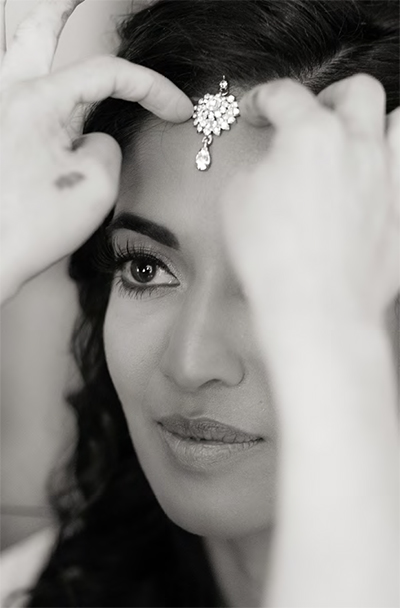 For the wedding ceremony, the couple decided to combine the parts of their heritages that they valued most. The first half of the ceremony was a tribute to Meena’s Indian family, while the second half of the wedding was more traditionally American. Meena’s mom’s uncle, Sri Hari das Kanuru, helped them with the Indian ceremony, and Hunter’s brother-in-law Albert Almore, a pastor, officiated the American-style exchange of vows. Dr. Kanuru performed the first ceremony under a flower arch called a “mandap”, and then the couple stepped in front of the arch and let the pastor take over for the exchange of the vows and rings. 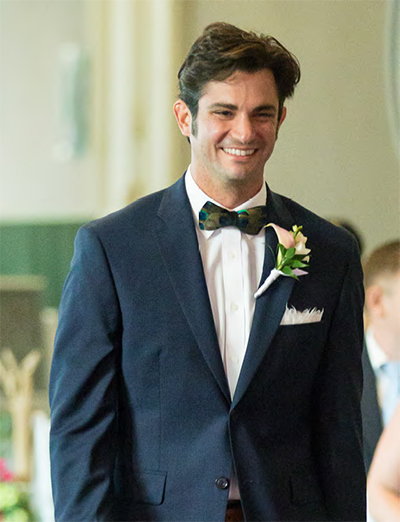 The couple chose their wedding planner, Beth Baldwin of Beth Baldwin Weddings, specifically because of her experience with Indian weddings. She helped Meena decide on the rituals she wanted to include – and how to blend both cultures together.

“I chose the parts that I thought were really fun and important. All my bridesmaids were wearing Indian outfits and I wore a sari,” Meena said. But “my parents and I walked down the aisle like you would at an American wedding. We exchanged flower garlands but also vows and rings.”

The result of their planning was a ceremony reflecting the cultures and personality of the bride and groom. And, true to their love of the coast, they planned a beach wedding— the cake was decorated with flowers and starfish. But rain changed their plans, and The Westin was able to move the event indoors. 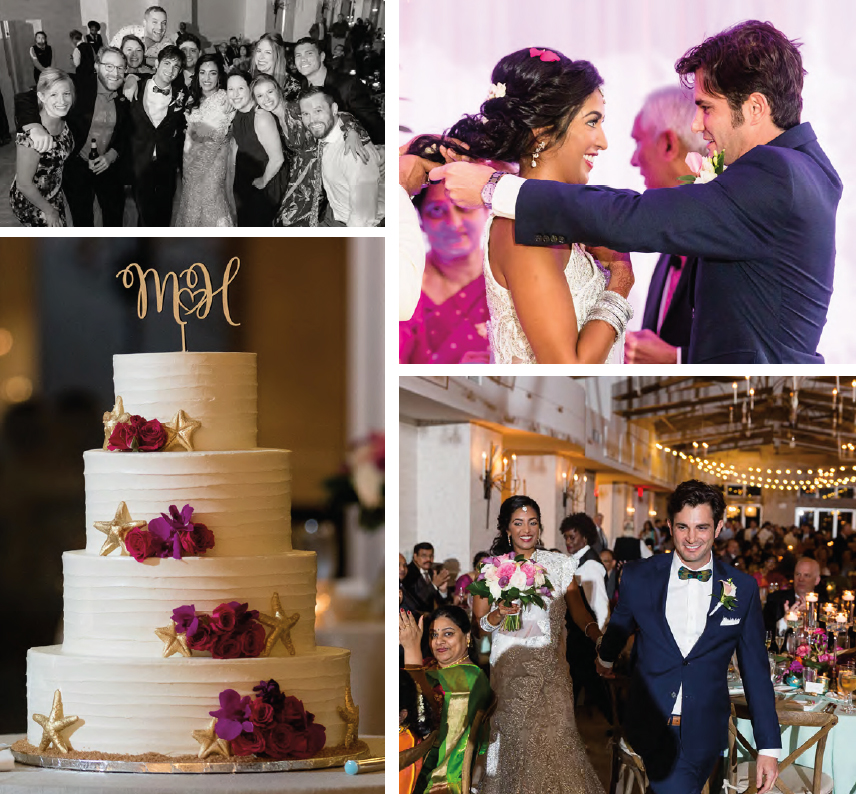 Meena didn’t seem to mind: “I hoped that we’d get a thunderstorm with the view out of the windows. We still included the beach. We had dinner in the oceanfront room, which is beautiful with high ceilings, big arches and a view of the dunes and the ocean.”

Both Hunter and Meena said the Celebrity All-Star Band was one of the best parts of the night. The band had everyone at the reception dancing — including a few moves Meena hadn’t seen before. 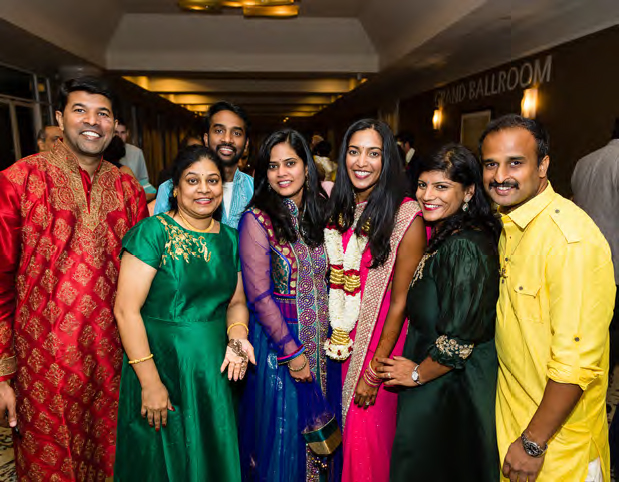 “At one point, Hunter got up and busted out The Worm,” she said. “I had no idea.”

Hunter and Meena feel lucky to have gorgeous pictures to remember the event, thanks to award-winning local photographer Tim Zielenbach: “He spent time with us and got to know us. He really went above and beyond.” 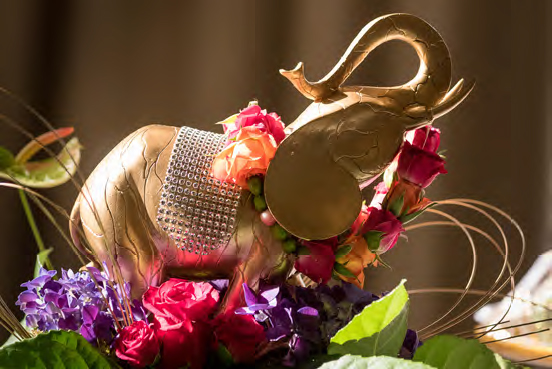