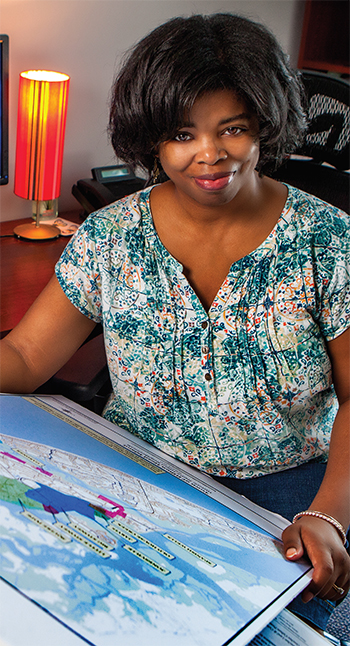 As a child in northern New Jersey and then on Hilton Head Island, Sheryse DuBose absorbed lessons that groomed her for her role as the island’s new historic neighborhoods preservation administrator.

Her father, Joseph Grant, was a native of Hilton Head. He and her mother, Julie, who was from Rhode Island, were both educators and raised her with stories of island life that nurtured her interest in historic preservation. “They gave me a strong sense of who I am,” DuBose said. “

Even when I lived in New Jersey, my father always talked about what life was like here, so I was always intrigued about life before the bridge came in 1956. When I moved here and I saw all the changes occurring, I wanted to be a part of preserving the history before it was gone.”

After her family relocated to Hilton Head, DuBose’s grandmother, Janie Grant, reinforced the importance of native islander culture and history.

“She use to tell me stories at her fruit and vegetable stand … about what life was like growing up here, and it was similar to my dad because it was all before the bridge — a farming and fishing community,” said the 48-year-old DuBose, who was raised in the Garner community along Marshland Road. “I loved to listen to her talk to me. Her voice was so melodic and so unlike my own, so I liked to hear her tell those stories through her voice.”

DuBose was selected as the historic neighborhoods preservation administrator from among 49 candidates because of her years of experience in current and long-term planning and cultural preservation, town officials said. “She spent 25 years in studying and advocating for the native islanders,” said Hilton Head Mayor John McCann.

Community development director Shawn Colin agreed: “She had the best balance of planning and cultural and historical preservation (experience).”

The $69,000-a-year job came out of a recommendation from the Gullah- Geechee Land & Cultural Preservation Task Force, which said the town needed a direct link to residents of its historic neighborhoods. That made DuBose’s local ties a bonus — even if town officials didn’t know about them until she came in for an interview as one of three finalists, said Lavon Stevens, the task force chairman.

The task force — comprised of Hilton Head town officials and native islanders —finished its first phase earlier this year. The project is designed to identify and resolve issues to help native islanders maintain ownership of and maximize the potential of their land.

“She is quite impressive,” Stevens said of DuBose. “We recognized that she had a good background in land planning.”

McCann said he wants DuBose to initiate and implement programs to preserve the island’s historic neighborhoods.

“She will act as liaison between town staff and members of the native islander community,” he said, “ensuring that there are open and clear lines of communications.”

Gullah/Geechee culture was always intertwined with DuBose’s studies and academic writings, she said. She studied urban policy at Hampton University in Virginia, which led her to eventually getting a master’s degree in urban planning at the University of New Orleans. She has a Ph.D. in education, with an emphasis on cultural studies, from the University of Tennessee.

Targeting historic neighborhoods and educating residents about how certain properties are affected by the town’s land management ordinance are her top goals. “I would like to be able to help people who are not very vocal in voicing their concerns,” she said. “And if one person says that I have helped them, then I think that will be a success.”

DuBose, who is married with two sons, returned to the island in May when she started her new job. Her father and her late mother, who died soon after DuBose accepted the position, expressed their pride in her accomplishment. Her grandmother would have been proud of her, too, she said.

“She saw a lot of changes in her lifetime,” DuBose said, “but the fact that I am here, and being a voice for her people, I think that would make her proud.”