In a time when so-called influencers can boost or burst reputations with one or two keystrokes, Hilton Head Island has drawn award-winning acclaim in national travel publications.

The island continues to receive accolades from readers — and probably their families and friends, too — in some of the country’s most well-known travel magazines. For example, over the past several years Hilton Head has been labeled the “No. 1 Island in the Continental U.S.” by Travel + Leisure, the “Best Island in the U.S.” by Conde Nast Traveler, and the “South’s Best Beach Town” by Southern Living.

The awards may be seen by some as little more than popularity contests, but the accolades provide more than bragging rights for resort towns and vacation designations. These reader polls are conducted by media outlets that boast sizable print and digital audiences, as well as social media followers who travel frequently and have hefty average household incomes, and poll winners are celebrated across the magazines’ various platforms.

So it’s easy to understand how these polls could be seen as third-party endorsements for destinations like Hilton Head, where tourism has an $1.4 billion economic impact, said Charlie Clark, vice president of communications at the Hilton Head Island-Bluffton Chamber of Commerce. Destinations don’t pay for nomination or inclusion in the polls, she said. 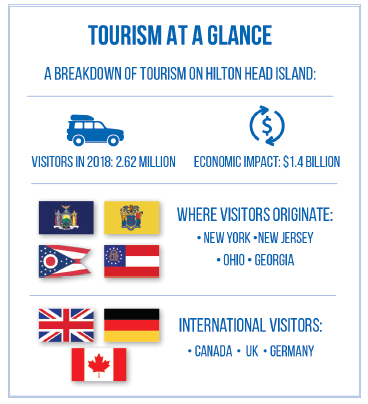 And while the reader awards are nice badges to display in marketing materials, for Hilton Head boosters they are sign of a successful effort to draw attention to the island and its amenities.

“Travelers have an abundance of options on where to travel,” Clark said. “When the well-traveled readers of Conde Nast or Southern Living and others rave about the island, it has a positive impact on our brand and on visitation.”

The chamber is Hilton Head’s designated marketing organization, which means it receives 30 percent of the 2 percent accommodation tax collected by the state from island visitors. The money helps advertise and promote tourism on the island; other funding for marketing comes from private funding and co-operative marketing with hotels and other tourism entities, Clark said.

Clark attributed Hilton Head’s performance in these polls to the island’s carefully curated brand and “very loyal fan base.” More than 2.6 million people visited the island in 2018, the chamber estimates, and while word-of-mouth is an important tool in promoting the island’s appeal, the chamber is constantly pitching Hilton Head stories to travel writers and social media influencers.

And the chamber keeps track of every time Hilton Head is mentioned in print, online or a broadcast story, Clark said.

“Last year, there were 1,630 stories and mentions about Hilton Head Island in the media — print, digital and broadcast — in outlets such as Forbes, Coastal Living, Southern Living, HGTV and many more,” she said. “This is millions of dollars in ad equivalency. “