The race takes only minutes, but the excitement of dragon boat racing started months ago.

On June 22, boats bearing 20 paddlers and a drummer will compete on the Beaufort River, setting out from the new day dock at Beaufort’s Henry C. Chambers Waterfront Park.

Last year’s DragonBoat Race Day drew more than 500 paddlers, 25 teams and thousands of spectators to the seawall at Waterfront Park, raising $55,000 to support people impacted by cancer who live, work or receive treatment in Beaufort County. All money raised by the race goes directly to support DragonBoat Beaufort’s Cancer Survivor Mission. This year marks the seventh annual event for the nonprofit organization.

Beaufort is far from the Pearl River Delta in southern China, but the centuries-old tradition of many paddlers working together to move through the water has taken root in the Lowcountry. These days, the double-hulled long boats adorned with decorative dragon heads are made of fiberglass or carbon fiber instead of the traditional teak. Twenty paddlers sit side by side on benches while a costumed drummer in the front keeps cadence.

TWENTY PADDLERS SIT SIDE BY SIDE ON BENCHES WHILE A COSTUMED DRUMMER IN THE FRONT KEEPS CADENCE. 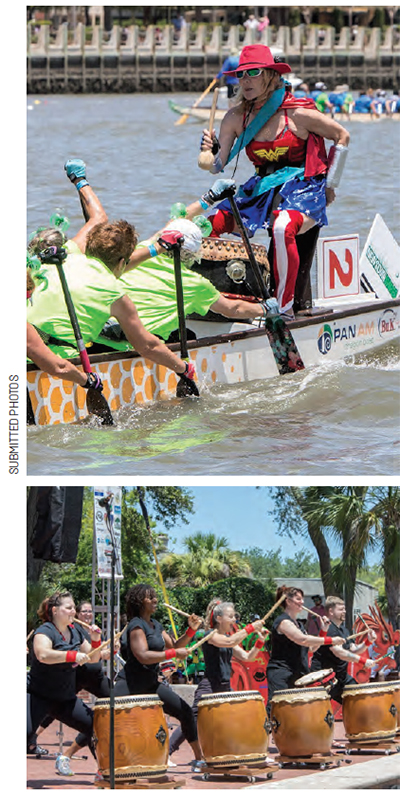 “The drummers are crucial in that they help with the rhythm of the boat, to keep everybody in synch,” said race director Connie Wegmann.

Anyone can form a dragon boat team and join the competition. Prior to race day, teams are trained how to safely and successfully paddle a dragon boat by experienced coaches and boat steerers. In the past, teams have included civic clubs, groups of neighbors, military, employees of local businesses, cancer survivors, schools, and hospitals. There is also a division for paddlers ages 50 years and older.

“In the last race of the day, you are competing against boats with similar levels,” Wegmann said.

“We provide the boat, life jacket, paddle, tent and drum,” Wegmann said. “They just bring themselves and shoes.”

For the two weekends prior to race day and three days before the race, DragonBoat Beaufort hosts practice sessions with instruction.

“The majority of the teams are made up of community members who don’t have the faintest idea of what a dragon boat looks like and have never been in one,” Wegmann said. “It’s great fun.”