Billed as the nation’s oldest city, St. Augustine, Florida, is rich in history and filled with old-world charm. Founded in 1565 by Spanish explorers, the city’s National Historic Landmark district features narrow cobblestone lanes, unique shops, innovative dining, museums and activities on every corner. Lace up your walking shoes and get ready to explore the hidden gems of this walkable city.

One of the most unique accommodations in St. Augustine’s historic district is The Collector Luxury Inn and Gardens — nine historic homes dating from 1790 to 1910 and spanning a city block. The inn was rated No. 1 on USA Today’s “Top 10 Best New Hotels,” and it’s the only four-star AAA Four-Diamond Rated hotel in the city. 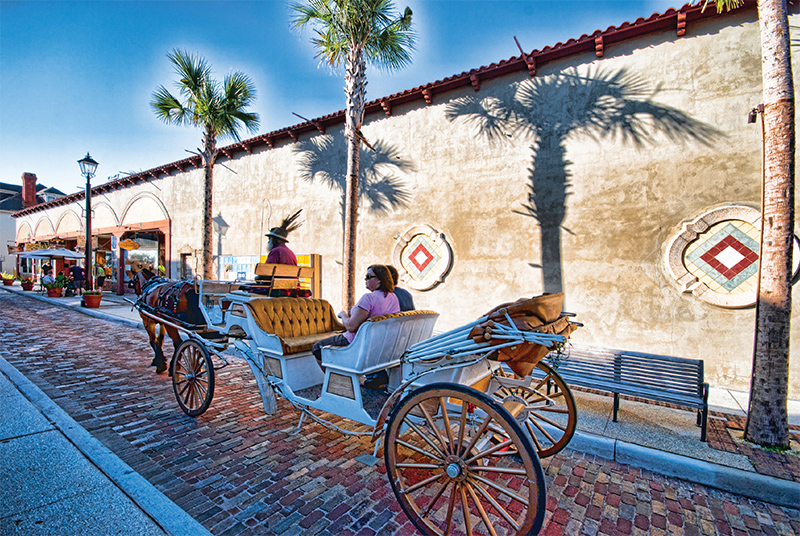 The Collector’s houses were transformed over 18 months into 30 individually curated rooms — all preserving the homes’ original historic charm, like coquina walls and original stained glass. Many historic figures once laid their heads on pillows there:  Prince Achille Murat, a nephew of Napoleon Bonaparte, occupied one of the historic homes; Mark Twain and Sinclair Lewis were guests at another.

During your stay, be sure to visit The Well — originally the first two-car garage in St. Augustine — for a craft cocktail or an evening around the fire pit. Or wander through the gardens that fill the 1-acre property, where you’ll find secluded seating areas, a heated pool and flourishing flowerbed. Even the grounds have their own claim to the past: A historic marker identifies the spot where the Emancipation Proclamation was officially issued in Florida, freeing the state’s slaves. 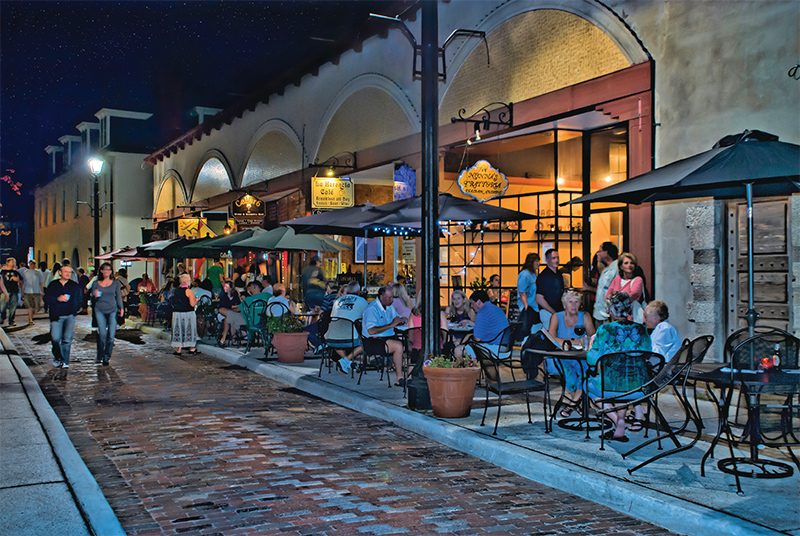 When you set out to see the rest of the city, head first to the Castillo de San Marcos. The oldest masonry fort in the continental United States, it was built to protect Spain’s claims on the New World. Explore it on your own, or take a tour led by a park ranger. Weapons demonstrations and cannon firings are held Fridays through Sundays.

Next, it’s off to Ponce de Leon’s Fountain of Youth Archeological Park. Watch a blacksmith make Spanish Colonial-style iron goods, experience life in the Timucuan Village, admire the Nobre de Dios — a reconstruction of the 1587 mission building — or view the finds from current and past excavations. 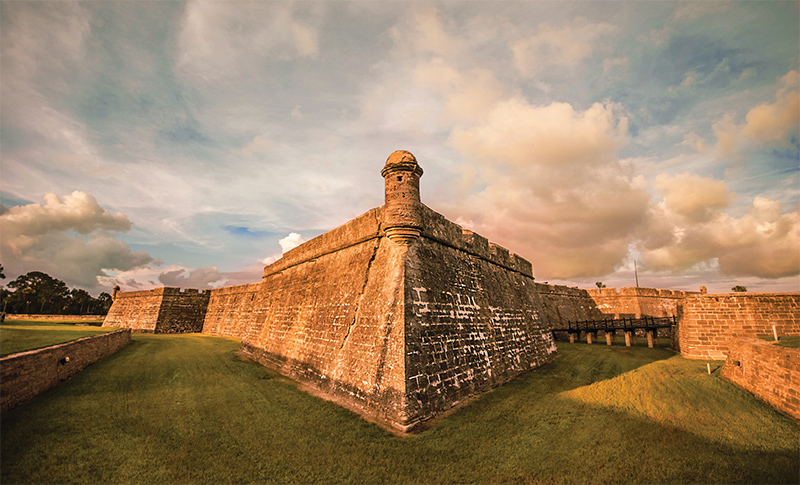 Ready to explore the 19th century? Head to the Lightner Museum, housed in what was originally the Alcazar Hotel. Built in 1888 by millionaire developer Henry M. Flagler — St. Augustine’s version of Charles Fraser — in its heyday the hotel attracted visitors from the North looking to enjoy the indoor swimming pool — once the largest in the world — steam baths, tennis courts and casino. Today, the museum has one of the best collections of fine and decorative 19th-century art in the country, ranging from Tiffany glass to fine art paintings and furniture, cigar labels and buttons.

Across the street from the Lightner Museum is Flagler College, which offers historic tours highlighting the architecture of the former Ponce de Leon Hotel, also built in 1888 by Flagler and today part of the college. During the 45-minute tour, you’ll see the historic 68-foot domed ceiling and collection of 79 Louis Comfort Tiffany stained glass windows. 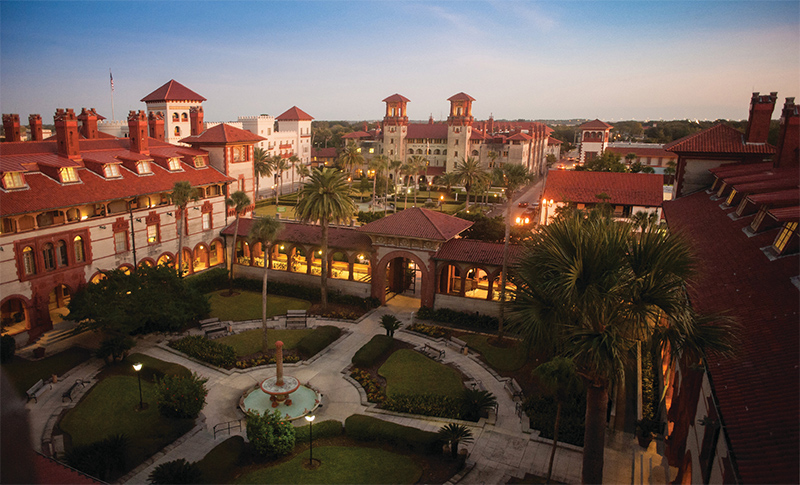 One of the city’s most unusual museums is the Villa Zorayda Museum. Built in 1883 of poured and crushed concrete, it is a 1/10th-scale replica of the famed Alhambra Palace in Granada, Spain. During your self-guided tour, be on the lookout for the “Sacred Cat Rug;” made of cat hair and depicting a stylized cat, the rug is allegedly the world’s oldest — and carries an ancient curse.

No visit to the city is complete without a stop at the St. Augustine Lighthouse & Maritime Museum. A quick drive over the Bridge of Lions will reveal the 165-foot-tall swirl of black and white. Climb 219 steps to the top for a stunning view or take a docent-led tour of the grounds, where you’ll see artifact conservation areas, ship modeling, heritage boat building and other exhibitions. 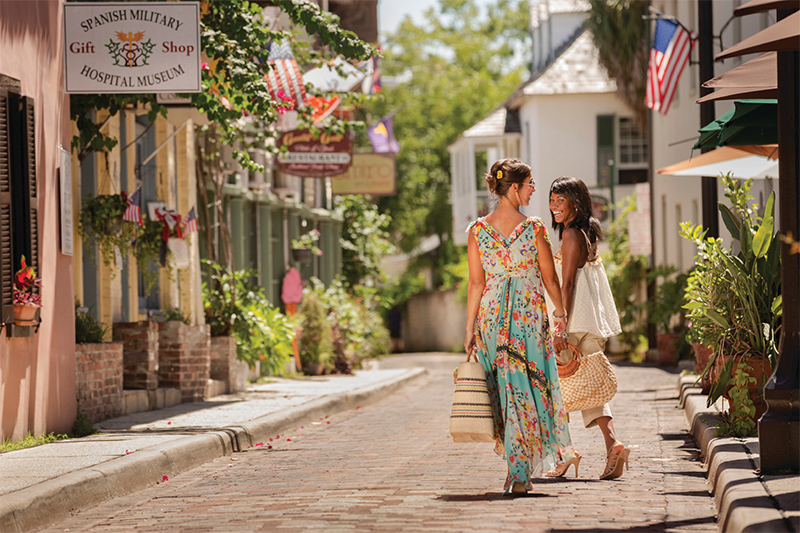 After a day of site seeing, enjoy a meal at one of the city’s highly rated restaurants. Just down the street from The Collector is the Preserved Restaurant. The Victorian building, built between 1865 and 1885, was once the home of Thomas Jefferson’s great-granddaughter. Recently named “One of the South’s Best New Restaurants” by Southern Living Magazine, the restaurant offers authentic Southern cuisine with locally sourced ingredients, prepared by James Beard-nominated chef Brian Whittington. Popular dishes include the Tomato Tartar, Shrimp and Grits, Mussels Frites, and Cheshire Pork Chop.

An easy three-hour drive down Interstate 95, St. Augustine is close enough for a weekend getaway but feels like it’s a world away. 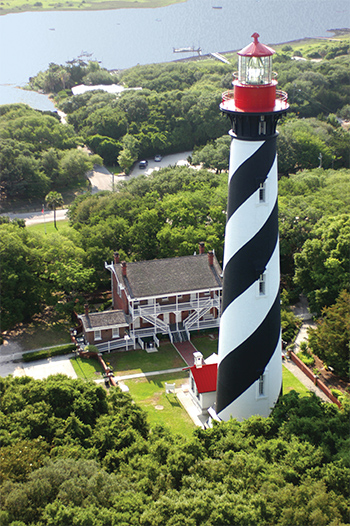