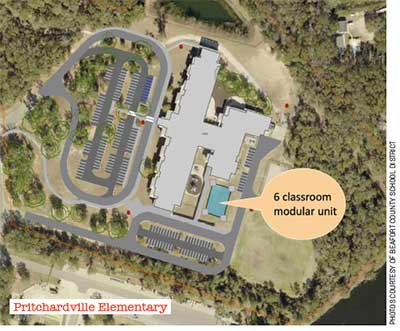 New mobile classrooms this year at two Bluffton-area schools will ease overcrowding this year, but the problem of growth will require a more permanent solution in years to come.

This summer, the Beaufort County School District is adding one modular building with six classrooms at Pritchardville Elementary School, as well as a modular building at River Ridge Academy that will feature eight classrooms. Officials say both sets of classrooms should be ready by the time the school year starts.

The neighborhoods around River Ridge Academy and Pritchardville Elementary have experienced rapid population growth in the past year, which has meant more children enrolling in the schools. Pritchardville Elementary was at 103 percent capacity at the end of the last school year, and River Ridge Elementary was at 117 percent capacity. The areas of heavy growth are in the May River High School attendance zone. 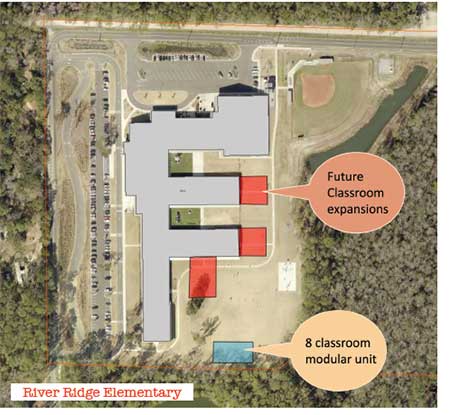 In the wake of the public's overwhelming defeat of a $76 million school bond referendum in April, the school board had to come up with a plan for the 2019-20 school year. The Beaufort County School District has projected that 388 new elementary, middle and high school students will enroll in the schools in the next year, and 1,524 students will move into the area in the next five years.

District officials have identified several schools that have the space to add mobile units to accommodate anticipated growth over the next five years: Hilton Head Middle, H.E. McCracken Middle, Bluffton Elementary, M.C. Riley Elementary and May River High schools. But one option is off the table, school officials say: Bluffton students will not be sent across the Broad River to northern Beaufort County schools in the 2019-20 school year, a fear that arose last fall when superintendent Jeff Moss presented idea to help ease overcrowding.