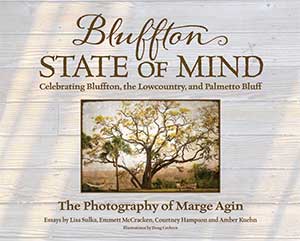 A photographer for more than 40 years, Marge Agin started out shooting weddings and portraits. But she really wanted to work in fine art photography.

Now she does. Her work can be seen at Four Corners Fine Art & Framing in Old Town Bluffton. It can also be found in her book, “Bluffton State of Mind.”

The collection of images tells the story of the historic town on the May River. It is filled with edited photos of the area’s landscape and wildlife, as well as shrimp boats, historic buildings, even a river baptism at The Church of the Cross.

“It’s very heartfelt,” Agin said. “It has the feel and the vibe of what Bluffton is. I’m somewhat of a newcomer to the area, and I just think it’s the greatest place ever.”

Agin got the idea for the book while driving past well-known Bluffton Realtor Martha Crapse’s funeral procession as it was going in the opposite direction.

“I thought, ‘Oh my God, all those great stories are just going to die if someone doesn’t do something,’” Agin said. “Here’s this little community that’s been so closely knit, but it’s starting to grow now, but it’s still holding onto its values ... It is pretty special because these places are disappearing.”

The book can be found at various stores in Bluffton, as well as online at www.starbooks.biz and www.margeaginphotography.com. 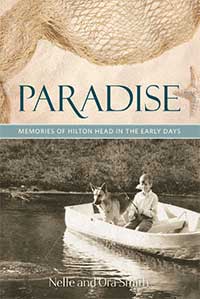 “PARADISE: MEMORIES OF HILTON HEAD IN THE EARLY DAYS” — BY NELLE SMITH AND ORA ELLIOTT SMITH

The day John Gettys Smith moved his family to Hilton Head Island in 1963, he began writing in a journal to preserve the history of his new community.

He and his wife, Nelle, had moved from York to the island with their three young children. John had accepted a job doing public relations for Sea Pines and called it “the chance of a lifetime.” Nelle opened the island’s first gift shop, Nell’s Harbour Shop in Harbour Town, in 1971.

Years later, Nelle promised her husband that she would finish his memoirs and write her own. She kept that promise; she and the couple’s daughter, Ora Elliott Smith, have turned John’s journals into a book.

“Paradise: Memories of Hilton Head in the Early Days” includes stories about John’s job interviews with Charles Fraser, his efforts to start a school on the south end of the island, and his marketing plans for golf and tennis.

In the book’s foreword, Nelle wrote, “The island’s history must be told, and our family was blessed to have lived it.”

Nelle said there were no banks, doctors or even a library on Hilton Head when her family arrived.

“My husband was the one who put Hilton Head on the map because he was the public relations director for Charles Fraser,” she said. “He knew we were making history.”

In 1996, Nelle and John moved to Beaufort. John died in 2009. Nelle works part-time at Lulu Burgess in Beaufort, while her daughter owns an errand service company called Beck and Call.

The book can be found at several area stores, including By Hand, Ink; Grayco; Pretty Papers & Gifts; The Greenery; the Shop at the Top at the Harbour Town Lighthouse; Nell’s Harbour Shop and J. Banks Design. 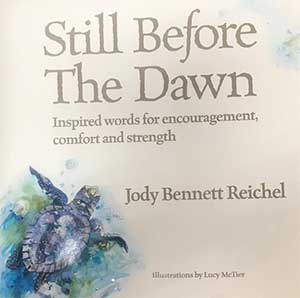 Jody Bennett Reichel’s book “Still Before the Dawn” was meant to comfort others. But the author said it has brought a tremendous amount of peace to her own life, especially after seeing how it affected others.

The longtime Hilton Head Island resident began writing poetry several years ago and released the book of inspirational poems in 2016. Since then, thousands of copies have sold, and stores have had to reorder again and again. The poems have helped many people through some of the most trying times of their lives, Reichel said: She receives an email or text four or five times a week from a reader inspired by her work.

When her sister was diagnosed with ovarian cancer in 2017, Reichel gave her a copy of the book and her sister brought it to infusion treatments. She ended up sharing it with other patients, and today the book can be found in several cancer centers for patients to read during treatments.

“If I can touch just one person,” Reichel said, “that’s my whole purpose.”

The book includes Bible verses, art and poetry related to various topics, from adversity to friendship, marriage and worship. Reichel’s words are complemented by the watercolor illustrations of Georgia artist Lucy McTier.

McTier was inspired by items around Reichel’s house that are dear to her.

“I did a lot of seashells because Jody loves the beach, and she wanted that to be an integral part of the work,” McTier said. “It was fun.”

McTier’s work can be seen in several galleries and is in more than 350 public and private collections.

“I have been amazed at what God has done,” Reichel said. “And I pray that it continues to help others and be used in their lives for years to come.”

The book can be found at most local gift shops in Bluffton and Hilton Head and online at www.jodyreichel.com and www.starbooks.biz. For more illustrations by McTier, go to www.mctierart.com.