Traditions have to start somewhere.

And 40 years ago, one of Hilton Head’s most beloved family traditions occurred by happenstance. The way the best kinds do.

In 1977, a then 20-something Gregg Russell found his way to Hilton Head Island following time spent working at Walt Disney World. 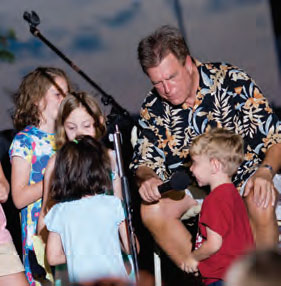 As he sings, when he started in Harbour Town, Elvis was still alive and Justin Bieber wasn’t born yet.

“Traditions are difficult to establish and this is one that has organically grown over the years,” Russell said. “There are so few things we enjoy together as a family anymore. Watching an old-school performer sitting under a tree with your kids and grandkids is a throwback to a simpler time.”

If the numbers are correct, Russell, along with longtime stage manager Randy White, have entertained 3 million people over the past 40 years. Over the course of those years, Russell has seen it all.

“We’ve had guys ask their girlfriends to get married, we’ve had, grandparents celebrating their 90th birthdays, family reunions … it’s been pretty special,” he said. “We are seeing generation after generation of families coming back. Some now grandparents who brought their own kids, are returning with their grown children and young grandchildren.”

One of those families are the Rademachers from Lawrenceburg, Indiana, who own a second home in Sea Pines.

“We have been coming to Hilton Head at least once a year, sometimes three or four times a year, for 32 years. Our children are now 35 and almost 33 years old and we have five grandchildren and one on the way,” said Jeani Rademacher. “We wouldn't even consider missing a night under the big oak tree if Gregg Russell was performing. We know all the words to his songs. Our kids sang with him on stage many years ago, and now our grandkids are practicing in hopes of playing their guitars and singing together just like their parents did. There is no other place we have ever traveled to that is as special to our family as this place.”

“Gregg’s concerts have truly stood the test of time for more than 40 years. It is wholesome, family fun that attracts a multi-generational audience,” said Rob Bender, The Sea Pines Resort’s director of recreation and marine operations. “It’s memorable and only continues to grow in popularity. It lends a nostalgic feel, especially for parents.” 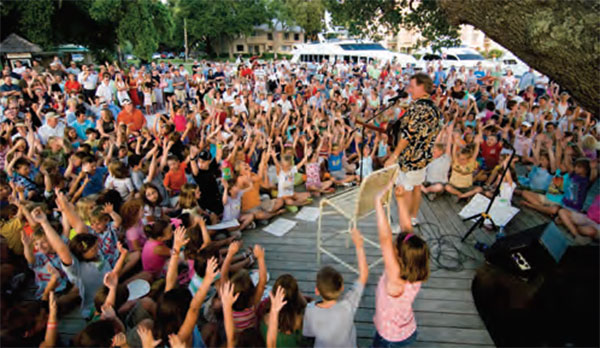 When asked about a highlight reel from the past 40 years, Russell said there were too many wonderful memories to cite, though he was very quick to mention a charity near and dear to him.

Russell and his wife, Lindy, started the Sea Pines-based family charity Hilton Head Heroes in 1998. They host families from across the country on a weekly basis in a vacation home approximately a quarter-mile from the famed Liberty Oak tree where Russell performs nightly during the summertime. All of the families that are invited to Hilton Head courtesy of Hilton Head Heroes have one thing in common: they all have a really sick child.

“We give the family a week here to take a deep breath and to escape doctors, tubes and treatments. It lets them build sand castles, see the dolphins, and be together as a family,” Russell said. “This organization has been by far and away the best thing we’ve ever done with our time, and our resources, and our contacts.”

From time to time during the summer months, the Hilton Head Hero families will join Russell’s admiring fans in Harbour Town. Russell’s fans come carrying signs to potentially give them an edge in their efforts to make their way to the stage, saying things such as “Pick me” and “You picked my mom 30 years ago.”

When a Hero family is in the audience proudly holding such a sign, Russell says he will always attempt to bring the child to the stage and introduce them to the audience, and the audience always responds in a wonderful way.

“One night, I had a little Hero child in the audience, and he was very, very fragile. You could just tell he had been through the ringer,” Russell said. “He came out and he kept raising his hand to be one of our performers, and I was a little apprehensive about that not knowing exactly what his condition was.”

“As always, the audience is always very generous and compassionate, and they just cheered wildly as this little fella did his thing. As we finished and I was about to put him back down, he said, ‘Gregg Russell, you didn’t ask me one of the questions you always ask everybody. You forgot to ask me what I was going to be when I grow up.’ Well there’s this little fella just as fragile as he could be. So I took a deep breath as I had avoided that question on purpose and said, ‘Alright, pal, what is it you want to be when you grow up?’ ‘My mom said I am going to have the best job in the whole world. I’m going to get to be an angel.’”

And with that, Russell reminds his lifelong fans of the joy in what can often be taken for granted, and that in itself is a tradition worth celebrating.