The history of rice in America is tied to the history of the Gullah community. The Gullah helped make rice one of the most important cash crops in the South, but the crop also owes some of its success to good luck. 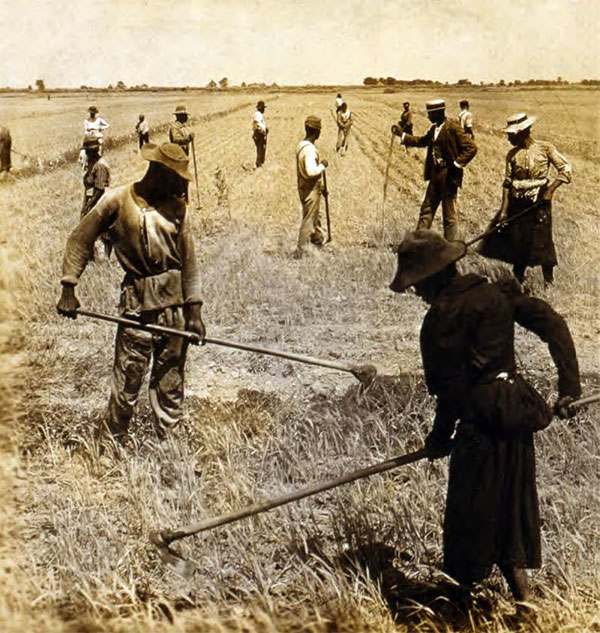 Rice’s origins date as far back as 2,800 B.C. in China, and it ultimately spread through Asia and Europe. However, its arrival in the U.S. was an accident. According to legend, in 1685 a massive storm struck far out in the Atlantic Ocean. After the storm, the ocean current sent a wind-battered and beaten ship sailing from Madagascar into Charleston Harbor. The ship’s captain received not only generous hospitality, but repairs to his ship from the colonists. In return for their kindness, the captain repaid the colonists with a gift of “Golden Seed Rice,” which gets its name from its rich golden color. This became one of the state’s most reliable crops and valued source of revenue in the 1700s.

The gift of rice to South Carolina was pivotal in several different ways. Slavery brought African people to Hilton Head from several West African countries. Their descendants were known as Gullah. The Gullah brought a variety of skills with them; they were skilled at farming a variety of crops, especially rice. Their skill in cultivating rice helped make rice an important part of South Carolina’s economy, and the Gullah people played an important role in making rice one of the state’s prime crops and revenue sources of in the 1700s, as well as one of the most important agricultural and economic crops in American history.

It also helped that the Lowountry coastline’s average temperature, coupled with the fresh tidal waters, marshland and nutrient rich and soft soil, were perfect for growing rice. The environment. along with the Gullah expertise in rice farming, helped to make the colonists’ rice crops successful. And the colonists needed all the help that they could get, as rice farming is an extremely labor-intensive process that requires 100 to 300 laborers per 100 acres to prepare the soil and harvest the land by hand. This hard work not only started the plantation era, but it also fueled the necessity for slaves and large plantations. Carolina Golden Rice became one of South Carolina’s premium crops, creating more tons of rice than the ships exporting it could carry, and set the standard for high-quality rice worldwide. Today, the U.S. is one of the world’s largest exporters of rice.

Gullah food is one of the oldest African and American culinary traditions found in the U.S. today. Their meals were created from the land and sea, and of the necessity to make do with what was available from their weekly slave rations. For example, they were provided 10 quarts of rice or peas, one bushel of sweet potatoes, two or three mullets or mackerels, one pint of molasses, one peck of meal, one peck of grits and, depending on the slave master, two pounds of pork, bacon or beef. What’s interesting to note is that many of the one-pot meals that are considered staples in the American diet can trace their beginnings back to Gullah and slave traditions. The next time you eat red rice (white rice mixed with tomatoes and bacon), chicken and rice, shrimp and grits, fried crab rice or peas and rice, know that the meal has been served for hundreds of years thanks to the Gullah traditions.