Driving down Gumtree Road, it is easy to miss the tiny bright blue house that sits to the side on Georgiana Drive.

It’s a little blue house with an important past, and a big story to tell about the courage, strength and resilience of one family and what this family can teach us about the history of the Gullah people. This 85-year-old house consists of two small rooms, and it shows its age. However, when you go inside The Little Blue House, you learn that it is the birthplace of the Gullah Museum, which preserves the memory of what life on Hilton Head Island was like for native islanders before the bridge brought outside influences to the island.

This tiny Gullah Museum is carefully preserving cultural artifacts and stories about Gullah traditions, and has big plans for future development. When you walk into the Little Blue House, you are greeted by Louise Cohen, a historian, storyteller and curator of the Gullah Museum.  Her voice is like warm maple syrup that envelopes you as it takes you on a journey back in time to when Africans on Hilton Head began to adapt to living free in America. She offers an important perspective about the history of Hilton Head before the bridge, and points out the three stops on on your journey through history: “Honey Horn, a former plantation, represents slavery; Mitchelville, the site of the first self-governing town of former slaves, represents freedom; and the Gullah Museum represents independence. 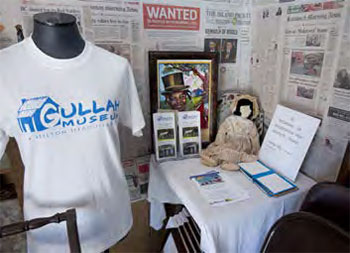 Cohen will begin your visit to the museum with a story of the courage and determination of her great-great-grandparents. The story outlines how her family originally came to Hilton Head Island. Her family was enslaved and brought through Sullivans Island and eventually to Rose Hill Plantation, where even today, the names of her ancestors, Cesar Kirk Jones and Moriah Jones, are listed in a frame on the wall of the plantation. The story she has been told is that Cesar and Moriah heard about the freedom that existed in Mitchelville on Hilton Head, and decided to seek freedom at the risk of their own lives and the lives of their young children. One evening, they escaped from Rose Hill and made their way along the water’s edge, where they found a bateau. As they were getting into the boat, the youngest child started crying inconsolably. Fearing that her screams would draw attention to them, Cesar made a heart-wrenching decision. He told Moriah to throw the screaming child overboard, so that they could continue to make their way across the water undetected. Moriah was faced with the impossible choice of freedom for her family, the consequences of getting caught, or the life of her child. Before she was forced to make such a difficult decision, she found a piece of mattress lying by the water’s edge and rolled the child up into the material, cradling her in her arms while patting the bundle to calm the child until they were able to make it across the water. The child was Amy Jones Miller, Louise Cohen’s great-grandmother. 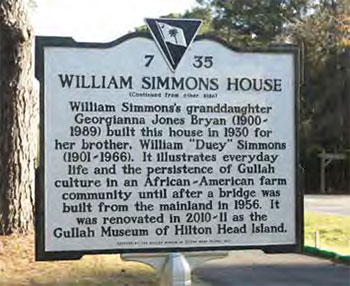 It is personal stories like this one that give substance, life and meaning to the Gullah Museum. This rich and compelling history is the driving force behind how hard Cohen works to preserve her culture for future generations.

The story of the Gullah people’s survival only strengthens the level of respect that the community deserves. As children, growing up knowing and understanding the language and culture as they did, it was difficult when interacting with outsiders to be proud of how they spoke, because in school, the Gullah language was considered broken English and backwards talking. Teachers would discipline Gullah children for talking so fast and in a way that was not always understood by everyone. The Gullah language is a blending of African and English words so that slaves could talk in front of slave owners without being understood. Growing up, however, “people laughed at us for how we sounded, and as a result of that some people have become ashamed of the Gullah culture,” says Cohen. “We need to stand up as a people and tell our story for who we are. No one else can tell our story better than ourselves. We have to accept who we are, we have to love who God made us into.”

For hundreds of years, the Gullah culture has been able to survive regardless of the obstacles such as slave owners trying to destroy their traditions, but other outside influences that eventually came into play as well. “The museum is here to tell the story of the Gullah. If our children don’t have something tangible to see or hold on to, then they don’t see our culture as real,” Cohen says. Passing down family legacies amongst the Gullah remains a challenge, even today. The Gullah worked very hard using the resources that the island provided. Growing crops to feed the family and make a living from was common, as well as harvesting oysters and fish from the surrounding waters. The inheritance of houses and land on Hilton Head has been passed down for generations.

“Nobody gave the blacks on the island anything. Families worked hard for what they had, and all of the land that we inherited was purchased,” Cohen says. “There are records of my family buying property for as little as $1 an acre.”

Stories and artifacts that demonstrate determination and perseverance are an important piece of making the culture something to be proud of. For instance, looking back to her childhood, Cohen didn’t realize how hard that her mother worked shucking oysters until she found the oyster knife that she used so much that her mother’s fingerprints are imbedded in the handle as a reminder.

The struggle that she has had, however, in addition to gathering artifacts and information, is trying to raise money to keep the project alive. An annual gala and other events throughout the year will help the museum grow into the campus that she envisions. The Little Blue House is the first of several buildings that are to be renovated as part of the project; other buildings that Cohen owns will also be renovated, and she has plans for a replica of the house that she was raised in.

The preservation of a culture is important because not only does it represent someone’s life, but it also represents a piece of American history. The Little Blue House is an amazing walk back in time and a journey that everyone should take.

For more information about the Gullah Museum, go to www.gullahmuseumhhi.org.