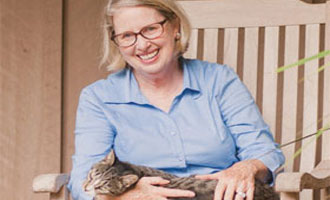 In a place known for thousands of luxury homes, vacation condos and guest houses, there are other residential enclaves tucked away on the island. They are feral cat colonies, outdoor areas in the woods where a loyal team of volunteers help trap stray and wild cats and have them spayed or neutered, as well as inoculated for rabies and other diseases. Due to their lifestyle, they are basically unadoptable and therefore returned to their natural habitat after treatment.

It’s there in these selfdescribed colonies where the volunteers provide the feral cats with food and water daily which enables them to maintain a healthy lifestyle on the island.

Several cat colonies on Hilton Head Island are maintained by volunteers on a regular basis. Some feed cats in their colonies on a daily basis while others volunteer on periodic specific days to help with the daily feedings. Pet food manufacturers donate a large amount of food for the feral cat feedings.

One of the loyal, conscientious volunteers in the feral cat program is Claudia Kennedy, a Hilton Head resident, who is a retired U.S. Army general. Kennedy, affectionately known as the “Cat Lady,” oversees two cat colonies on the island.

Kennedy, who was the first woman to hold a three-star Army rank, said she has had a lifelong love of cats, starting when she was a self-described Army brat growing up in a military family. She said she has owned many cats over the years and all were either adopted at animal shelters, strays, or cats given to her by friends and work acquaintances. 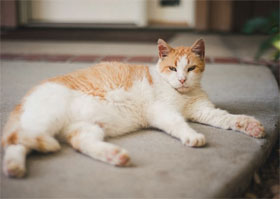 Today, Kennedy uses her military discipline background to maintain her cat colony on a daily basis. She rises at 6:30 a.m. and starts her feeding between 7 and 7:30 a.m. at the nearby wooded site. She religiously feeds dry food on paper plates and water to her cat colony of five. Kennedy also sponsors a second colony but pays someone to feed the cats in that group on a regular basis.

Kennedy said she became involved with the feral cat program because of her love of cats and her lifelong belief in spaying and neutering as a means of controlling the wild cat population and keeping them healthy.

“There are a large number of remarkable volunteers on the island who diligently do this work. One woman has fed more than 600 cats over the years,” Kennedy said.

Kennedy proves that one person can make a difference. Over the years, she has helped 36 cats in colonies and said she only had one that had to be euthanized because of a serious injury.

“Some of the feral cats, particularly those near restaurant waste disposal sites, are well-fed and are very coy about eating food set in the traps,” Kennedy said.

The feral cat program helps control the wild cat population and contributes to the cats living a longer and healthier life in the wild. 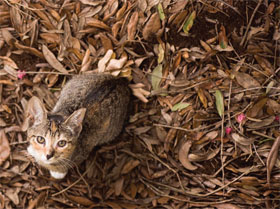 “They are not eating wild birds and moles, therefore they are keeping their weight down by eating healthy food provided to them by the volunteers,’’ she said.

Volunteers on nearby Daufuskie Island, for example, have been very successful with their feral cat spaying and neutering program and have not had a kitten born in the wild in the past three years.

Once captured, the cats are taken back to the association’s shelter and then transferred to the group’s spaying clinic in Ridgeland. Once spayed or neutered and inoculated, the cats spend another two days in the Hilton Head shelter before being returned to their wild habitat.

Last year the organization processed 900 feral cats in Beaufort County, many of which were on Hilton Head. They hope to spay or neuter about 1,000 this year.