Orchids, like the ever-popular Lowcountry architectural style, come in countless styles and variations.

In fact, the only thing the 30,000 or so orchid species in the world have in common is that each has three petals, three sepals and one lip. Other than that, each varietal has its own bloom color, size and shape, as well as fragrance and foliage. 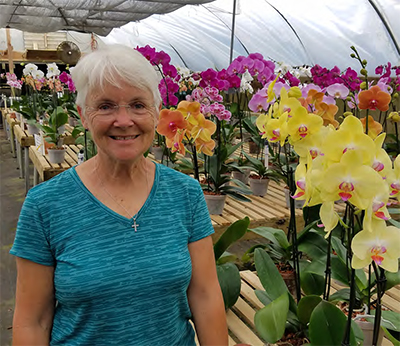 November in the Lowcountry is prime time for this flower, which brings us to Madeline Nelson, a longtime orchid lover who has been the owner of May River Orchids on Confederate Street in Bluffton for 25 years.

“The intrigue of orchids is fascinating,” said Nelson, a Louisiana native. “If you look at the different orchids, every one of them from one genus to another, is totally different. When you look at the phalaenopsis, and really look at the plant and the flower, there are so many intricate parts to it.”

Many people believe that orchids only grow in tropical or subtropical climates, she said, when they actually grow on every continent, except Antarctica, and in any climate. 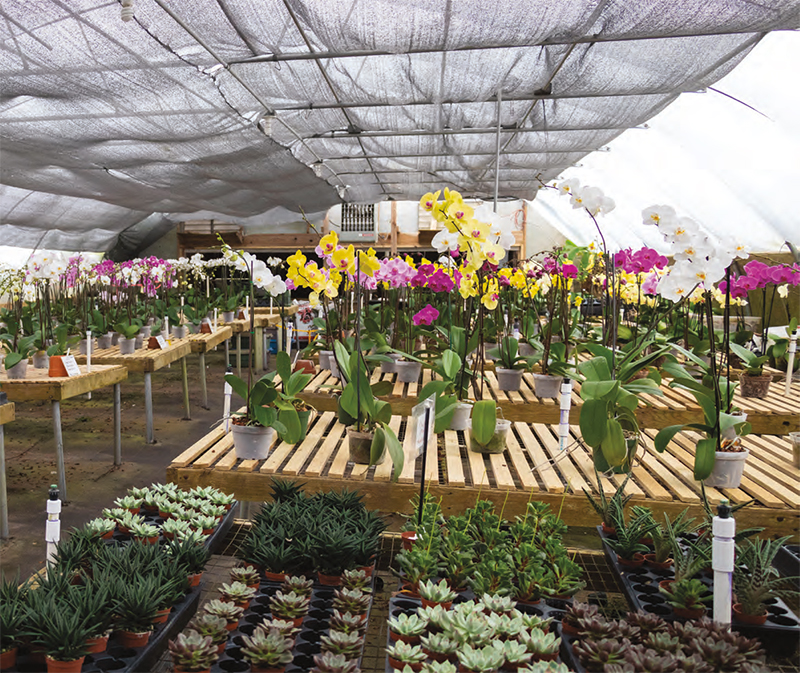 IF YOU LOOK AT THE DIFFERENT ORCHIDS, EVERY ONE OF THEM FROM ONE GENUS TO ANOTHER, IS TOTALLY DIFFERENT.

In one of her two greenhouses, she has about 3,000 orchids. The other greenhouse houses her private exotic collection. She mainly sells retail, and also teaches, lectures and hosts area garden club members for learning get-togethers. 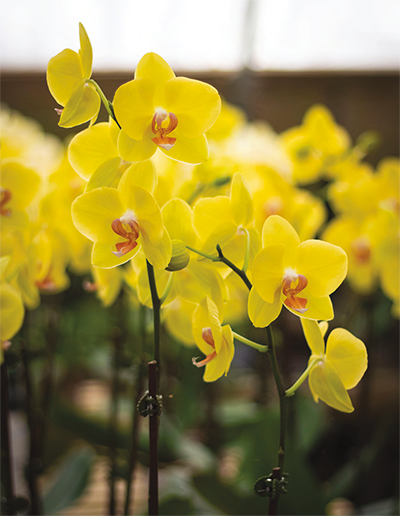 The business side of her orchid-loving passion came later in her life.

Thirty-five years ago, the mother of a friend she was caring for gave her a white orchid on Mother’s Day.

“I was worried I was going to kill it,” she said with a laugh. That didn’t happen — in fact, the plant lived for 25 years. “I was amazed how long the flower lasted. That was intriguing to me.”

Nelson began gathering an assortment of orchids in community pots and nurtured them with devoted attention.

“I just started buying orchids and noticed I was able to grow them with loving care,” she said.

Her husband, Dan, noticed it, too, and encouraged her to get into the orchid business. She did in 1994 and positioned about 200 plants on four tables. 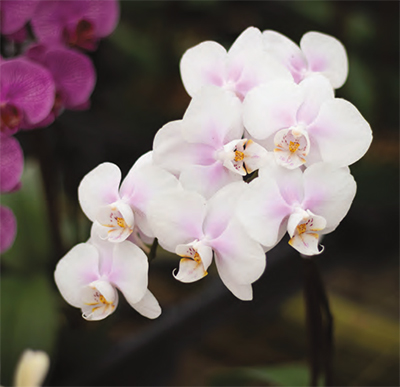 Then the couple cross-pollinated orchids for 15 years to create a boundless variety of flowers. They transported the pollen from one plant to another to merge hereditary characteristics of two plants to create a varied species.

“You take the pollen from one flower and put it on another flower or on itself,” she said. “The male and female are able to pollinate themselves. … You run the gamut of infinity, as far as color and shapes. You go from solid colors to mutated colors that are outstanding.”

Of course, every orchid lover has her favorite; the same is true for Nelson.

Her all-time favorite is the bulbophyllum orchid, “because of the wide range of flowers you get. You get tiny flowers that open in the early morning and close by lunchtime. So, you have to be up early to see them.”

She also adores the platystele stenostachya: “When it blooms, you have to look at it with a magnifying glass. It’s that small, and it smells fabulous.” 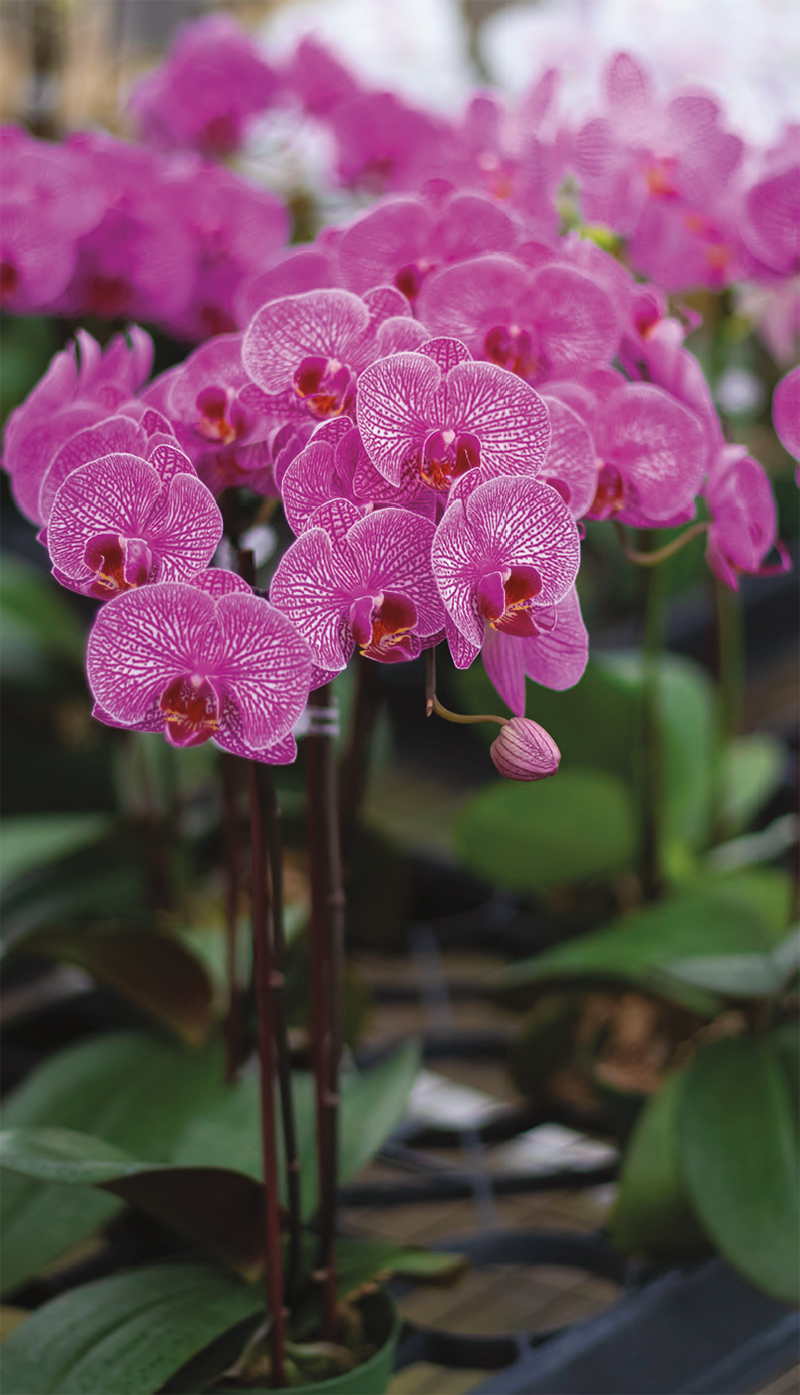 While orchids can adapt to any environment, they love our temperate Lowcountry climate. But they do need a little patience and special care.

Orchids like good air circulation and bright shade year-round, though they thrive best when planted between August and May. though the orchid is one of the largest flower families in the world, with about 30,000 species and 200,000 hybrids, it can be temperamental.

You can grow phalaenopsis orchids — moth orchids, the easiest to grow — indoors, but only if you have the right mix of temperature, light, airflow and humidity. They will produce showy blooms and long leaves throughout the spring and summer. This perennial shows about 20 white, pink, lavender, orange and yellow flowers and matures into an 8-inch to 3-foot plant with a single stem.

It likes a moist, slightly acidic, bark-like planting base. Good air circulation is a must for the rooting system to flourish, and the orchid will require weekly watering during the growing season; you can cut the watering half during the flowering season. This orchid also likes contrasting night/day temperatures for the best blooms, though you can also consider using a blooming fertilizer.

The pot size should fit the roots. Place the flower in the middle of the pot and add the bark mix. Allow for good drainage. Position the pot near a window for some natural light, and enjoy.