A few beautiful blossoms for a Southern spring 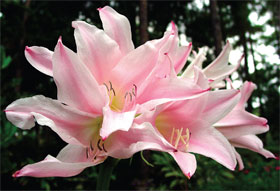 With the advent of spring and the last possible day of frost safely past, we launch confidently into our ongoing alphabetical romp to explore what is out there to enhance our gardens.

“J” is for Jessamine, Carolina Yellow, sometimes confused with Jasmine, but not the same thing. The southeast coastal native Jessamine, (genus Gelsemium), appears in the tops of trees as a sudden sweet surprise in late February-March, ushering in spring with its burst of bright yellow, mildly fragrant blossoms. Jasmine, (genus Trachelospermum), usually Confederate, though there are other types, is a white, four petaled flowering vine of a more formal nature, very fragrant blooms in June and is capable of leaping to the treetops. It is best controlled by strict pruning after the bloom is finished, but is definitely worth having in the garden.

Jewels of Opar, a relative newcomer, receives rave reviews from ardent and skillful gardener Ramona Kramer. While not flashy, it cohabits comfortably with neighbors, offering contrast of variegated foliage, while sending up slender stems topped with fragile pink blossoms, followed by the colored seeds which are its jewels. Not fussy as to cultivation, it dies down in winter to re-emerge in spring, and is suitable for container or ground cultivation. It may be bought locally, but though all species are not variegated, all foliage is substantial and attractive. Some reports deem it invasive if not contained.

Joe Pye Weed, (don’t ask), is an eye-catching roadside perennial that fits nicely into an informal or natural garden. It is a Southeastern native of low, moist areas and ample sunshine. Those providing these conditions will love this plant for its large rose to rust inflorescences which appear in the fall atop five foot stems. It is a surefire magnet for butterflies and hummingbirds, but may need staking during heavy rains. 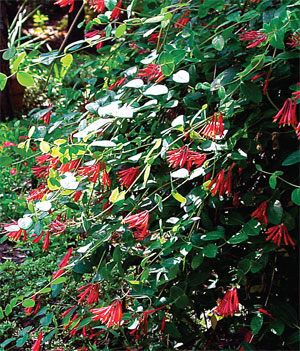 Kerria japonica is a medium sized, deciduous shrub, four to six feet, with arching stems bearing bright yellow flowers late April and May. The double flowered variety, “Pleniflora,” is the most effective for its abundant large flowers. Tolerant of ordinary soil with good drainage and medium fertility, it will grow in sun or part shade and offers an attractive addition to the shrub border or against wall or fence. Pruning is required to maintain attractive form. Kiwi vine is a colorful twining vine, meaning it needs support, with splashy pink, green and white leaves in combination, flowering in early summer. Grown mainly for its foliage, only the male plant produces small fragrant white flowers. If you wish to harvest Kiwi fruits, you must plant both male and female plants because the Kiwi is dioecious, (both parents required). It grows quickly to about 25 feet with ample spread, is deciduous but returns in glory.

Kniphofia, much better known as Red Hot Poker or Torch Lily, is a gaudy spiked perennial in the yellow, orange, red spectrum, frequently all three at once on the same plant as it matures. Height varies from ten inches to five feet, so be sure to know which type you are buying to fit into your scheme. It requires full sun, extremely well drained soil and should be deadheaded regularly to keep flowers coming. Recently, dwarf varieties have been developed, so inquire closely at your nursery.

Leucanthemum is what we used to call Shasta Daisy and every garden should have this dependable perennial because it fits into any scheme as long as provided with plenty of sun and good, rich soil. Of the many varieties available, such as ‘Ice Star,’ ‘Snow Lady’ and ‘Broadway Lights,’ ‘Becky’ is the most desirable for the South, as it originated from a cross in the Atlanta area. Clumps are tall and substantial, to three-four feet and flowers are large, showy and numerous, starting in June. 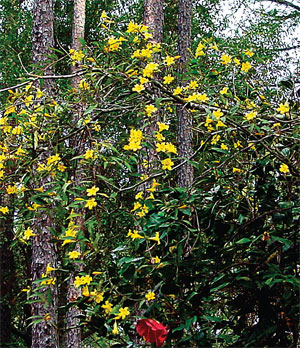 Lonicera sempervirens, honeysuckle, is not evergreen as its name implies, but semi-evergreen. This colorful twining vine must be tied to its support. It blooms all summer and into the fall, after which point it should be cut back to control and shape its rampant growth. The red trumpet variety attracts hummingbirds and butterflies while the yellow-flowered variety, ‘John Clayton,’ is highly praised, along with a stunning golden cultivar called ‘Mandarin.’ Lilium, like iris, should not be overlooked as a garden must-have. There are over 80 species and hundreds of cultivars, many of which are household names, as the splendid white ‘Casablanca’ and the vivid ‘Stargazer;’ even the ordinary Easter lily will do well in the garden. A native southern lily less well known is the Crinum lily, sometimes called ‘Milk and Wine’ for its coloration. Its fragrant blooms, maturing to a large clump, were once a staple of every Southern garden, and may still be so. Available from a bulb nursery or a gardening friend.

With high hopes, we enter a new season in the garden!