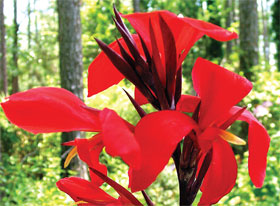 With a brutal summer finally winding down and the beginning of cooler weather on hand, it’s a good time for looking both forward and backward.

We’ve had great success with a number of plants this year, especially our pentas and angelonia.

Both want plenty of sun — especially angelonia, which will grow thin and wispy if deprived of it. But pentas, which can be bloom in colors ranging from pale pink to lavender to cerise, will outbloom and outlast everything else in your garden.

The Zahara zinnias performed nicely on their first trial run; they’re shorter than the traditional zinnia and sport a perkier attitude. Their colors are interesting — some are even bi-colored, which makes them blend easily. And they appear impervious to that old bugaboo mildew, a plague in our high-humidity summers. Scaevuola is also definitely a keeper; it blooms while spreading generously or draping handsomely from container or hanging basket.

Supertunias and calibrachoa were truly super for about two months — until they began to play out. The petunias became long and straggly, blooming just at the tips, while the calibrachoa slowly faded away. Cutting back might have helped, but it’ll take another season to find out, so stay tuned (unless you already know the answer and can share it!).

One of the lessons we learned this year is that traditional coneflowers tend to grow too tall and fall over en masse, brought down by both their own weight and the constant assault of rain and wind. In hindsight, we might have had more luck pinching off the first central bud to encourage more compact growth — and we might have had more blooms, too. That’s easy to say but difficult to do, as most gardeners are reluctant to postpone blossoms by pinching. We determined that stokesia isn’t worth the space it takes up because of its short bloom period; it leaves substantial remaining foliage that occupies a large area of the garden, which could be more attractively utilized.

Elsewhere, we learned that Salvia farinacea ‘Victoria’ is very attractive in its first bloom. It is said that upon cutting back in midseason, the plant will return — just not vigorously. In fact, it’s better to just replace it with something else for a continuing color parade. Ordinary red perennial salvia, meanwhile, is very vigorous and should be cut back by half at midseason to keep it under control — and promote more stems for blossoms.

As for perennial Salvia leucantha, its pendulous purple, lavender and white flowers will come into bloom to help the color transition from August through September. Gardeners can also depend on ruellia, the Mexican petunia. It was excoriated just last month as being too invasive, but if you want color at a tough time, it will oblige with a nice purple and even its red “ragin’ Cajun.” (Just don’t let it take over its allotted space.)

Around this time of year, assuming the weather cools, geraniums and California bush daisy will take on second lives and continue well into the fall — until threatened by freezing.

Pleasant surprises have included rain lilies, which pop up indiscriminately whether it rains or not. Torenia will make a plant everywhere it drops a seed, and helps fill out some of the late summer-early fall blank spots. And canna lilies, particularly the bronze-leaved cultivar ‘Arizona,’ will take on renewed vigor and bloom again brilliantly.

Whatever’s happening in your garden, remember that as the British gardener and writer Beverley Nichols says, “It is only to the gardener that time is a friend, giving each year more than he steals.”