To celebrate World Habitat Day on October 6, 2008, the a capella concert, Harmony for Habitat, will take place and will feature barbershop-style harmony and other a cappella singing from around the Coastal Empire to benefit Hilton Head Regional Habitat for Humanity and commemorate World Habitat Day 2008.

The Hilton Head Lighthouse Chorus has a well-deserved reputation for supporting local charities via their community support program. In the past year, they’ve produced a benefit for Deep Well, donated $1,000 to the Bluffton High School Music Program, performed, and made a donation at the Hearts for Henry benefit concert. So, when Sing-Out Chairperson Paul Jacobson presented the idea for the Habitat for Humanity benefit to the chorus board of directors, it didn’t take much to persuade them. 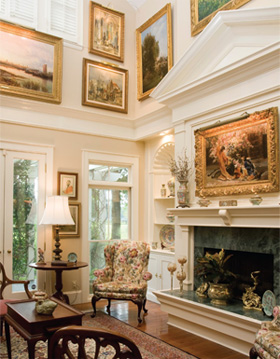 A veritable tribute to fine and historic masterpieces, this elegant and well-appointe home, in step Monthly’s October “arts-infused” issue, features numerous stunning paintings by 19th century English and French artists, which are as grand as the space in which they are displayed. Note the beautiful heart pine flooring throughout). In the magnificent living room, pictured this page: The painting over the fireplace is entitled, “Japanese Wedding Cart” by Heublant (French school). Over the door, visitors will find “A View of Dordrect - the Grote Kerk” by James Webb (English school). The two paintings on the right, by Vogel, include “A View of a Cathedral” and “An Interior of a Church” (Rembrandt’s mother is buried there). 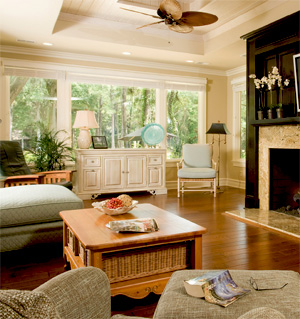 Sometimes you have to be able to look beyond the old and outdated to imagine that the house you have purchased can become the home of your dreams. Such was the case for Dennis Egan and Kim Godfrey, who bought their classic home in The Sea Pines Resort as a second home. “Initially, we fell in love with Sea Pines, Twin Pines Road in particular, and when we found this house, with its beautiful view and spacious floorplan, we knew this was the house for us,” said Dennis.

Although the house had much of what Dennis and Kim envisioned for their home, there were areas that were tired and in need of updating. The couple enlisted the aid of architect Mark Paszek to execute the reinvention of the house. “Kim and I had a vision and ideas that we had collected together over time. Mark was wonderful at translating those ideas into reality, and as it happens many times with a renovation, the project took a life of its own, and our second home became the focus of our time, passion and energy.”

Adding layers of light and other tips for enhancing the most popular gathering space in your home. 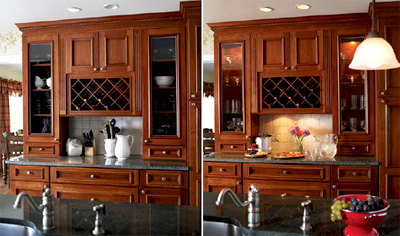 Bring your kitchen to life with carefully chosen and thoughtfully placed lighting fixtures. Whether preparing a meal or hosting a casual get-together, you’ll love how multiple layers of light can change your kitchen’s mood to suit the moment. A well-designed plan provides ideal lighting for every situation.

Begin by imagining all the activities that will take place here – dining on the island, food preparation on the counter, reading the morning newspaper – and consider layering light in such a way that will help you be the most productive and comfortable in this space.

FOR THE GAME LOVER 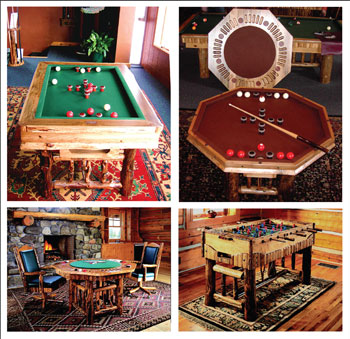 Turning a den or garage into a game room might be the perfect retreat for your home. Make it fun for the entire family by starting a weekly game night tradition! A game table set is for the person who loves card games, backgammon, roulette or even chess. These tables can covert into several different games and have plenty of storage for cards and chips. Game tables come in a variety of wood finishes to complement the décor of the room. Mahogany is a popular finish but a honey finish also looks elegant. A game room wouldn’t be complete without your favorite games, such as pinball machines, arcade games, foosball tables, dart boards and even board games.

For the golf lover, set up a small putting green. Practice your putt right in your own home! The race car enthusiast can get the feel of driving a real race car with the Virtual GT Racing Simulator. Check out virtual-gt.com to become a race car driver with your own “personal racing simulator” without ever leaving the driveway! 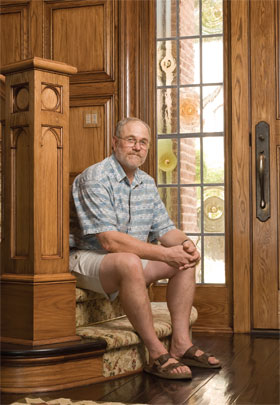 In an age where everything seems to be mass produced, the design and craftsmanship of custom woodwork is a rare beauty – even a fine art – that few modern homeowners have the luxury of possessing. And the craftsmen at Hilton Head’s Marshland Millworks and Cabinetry, true masters of custom woodworking, take their art very seriously.

“I have unreasonably high standards,” said Duane Constantino, the owner of Marshland Millworks and Cabinetry. And like any artist who pursues perfection in his work, Constantino said he’s not sure he’s ever been completely satisfied, and this attention to detail and quality is echoed throughout the company. “Everyone at Marshland is interested in doing a superior job,” he said.

Old-fashioned living in the heart of Oldfield. 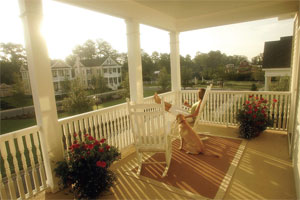 When Rob and Dianne Wilson moved to Lakeside Village from Fairfax County, Va, in 2005, they knew that they found the ideal place to raise their four young children.

Located in the heart of Oldfield, Lakeside Village provides the perfect setting for this active family to hike, bike, swim, play tennis and enjoy the natural beauty of the Lowcountry. “My wife and I visited a number of communities up and down the East Coast before deciding on Lakeside Village at Oldfield,” said Rob Wilson, a successful recruiter. “This is a great place to raise kids, and great place for adults as well.” Lakeside Village, a Charleston-style neighborhood overlooking Goose Lake, offers ample old-fashioned charm and Southern hospitality. “Lakeside Village has truly set the standard for casual elegance in the Lowcountry,” said Scott Stephens, Oldfield’s vice president of sales and marketing. “The interest in this exciting community at Oldfield has been outstanding.”

A few depth-defying tips for creating the illusion of space in a smaller place. 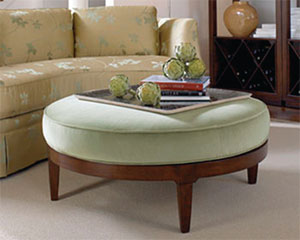 It can be a little frustrating to know your condo, villa or new smaller home does not have an abundance of space. Perhaps you have made a decision to downsize into a more reasonable space for the “empty nest” time in your life. Don’t despair; there are numerous ways to arrange and decorate your new home without giving up style and function.

A charming & elegant collection of homes, just a short walk to the shores. 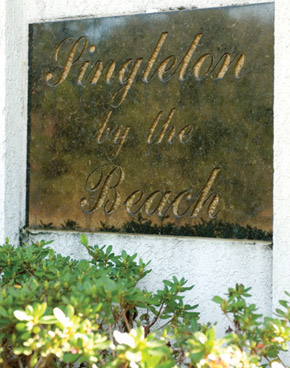 Singleton by the Beach is a charming community located in the mid-island area. A small neighborhood, it is big on charm. All of Singleton by the Beach’s Charleston-style homes are elegant and stately, yet they have been constructed with the latest advances in technology.

Developer/builder John Melkon, of Palmetto Investors Group, visited Seaside, Florida, and returned to Hilton Head an inspired man. Melkon wanted to build a new community and what he saw in Florida was a wonderful starting point for his creativity. He wanted to create a community bursting with charm, where homes were constructed using only the best materials, while keeping the entire area in harmony with nature. This is exactly what Melkon did with Singleton by the Beach.