As the island grew and matured in the ’90s, so did its homes’ aesthetics. New homes and home renovations brought their own identities and personalities. Lighter hues and a mix of materials, fabrics and textures were increasingly being found under one metal roof.

But one grand oceanfront home, built in the mid-1980s in Palmetto Dunes, stubbornly stood the test of time, avoiding new trends and clinging to its palm-covered fabrics.It’s no wonder the current homeowners, who bought the home in 2013, were having trouble selling the house or renting it on VRBO as a dreamy island getaway. 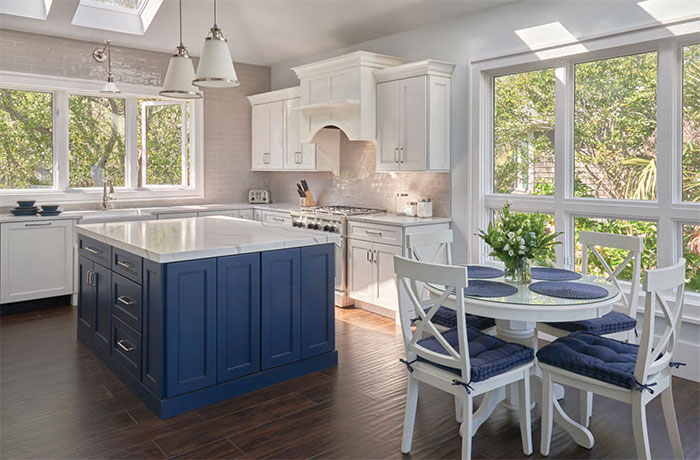 But help was on the way. Last year, builder Cameron & Cameron Custom Homes and Kelly Caron Designs, both based in Bluffton, completely remodeled the interior of the 6,400-square-foot Palmetto Dunes home, infusing their considerable talent in every room of the six-bedroom, six-and-a-half bathroom house.

IN THE KITCHEN, THE RANGE AND REFRIGERATOR WERE MOVED, AND A BUILT-IN STORAGE CLOSET WAS TAKEN OUT, CREATING AN OPEN, AIRY AND INVITING SPACE. 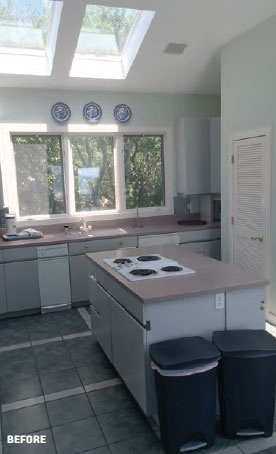 “It definitely had an ’80s beach vibe with the décor, a bright pink Corian bathtub and dated wallpaper,” said Brandon Edwards, vice president of operations for Cameron. “It needed to be transformed completely. We had to update the house and make it more attractive, especially for pictures online as a vacation destination.”

The drab and dreary home had no chance of competing on VRBO against neighbors down the street, whose stately home is the epitome of “coastal chic.”

“Even though it’s oceanfront, they really weren’t able to get renters,” said Andrea Eldred, Cameron’s president and controller, of the dated home and its frustrated owners.

Caron was already on board as the interior designer when the Cameron team met with the homeowners in 2016 about a full-blown remodel.

“Kelly already had her vision for the space, a whole overhaul of the interior style” that fit into a coastal transitional movement of design, Eldred said. The builder and designer combined their visions, and work began in the fall 2016 — only to be stalled by Hurricane Matthew that October. Work was completed in June 2017 without requiring any structural repairs due to the storm. 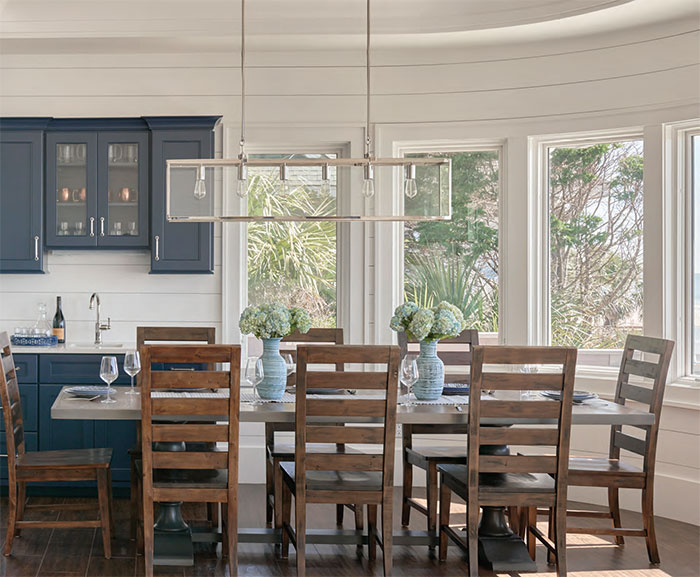 The home’s primary living space is on the second floor, where the master suite, kitchen, great room and living room take advantage of the unblemished view of the ocean beyond the property’s 90 feet of waterfront. To take full advantage of the space, the builders improved the flow in the kitchen, dining room and the great room, removing a fireplace in the process.

“It was a weird one in the middle of the great room upstairs, and it made the furniture look awkward, so we removed it as part of the renovation,” Eldred said. 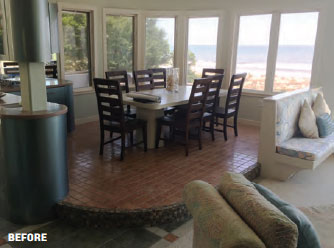 An elevated floor with steps in the dining room was leveled, and the rotted window frames in the back elevation were removed and replaced with aluminum clad. In the kitchen, the range and refrigerator were moved, and a built-in storage closet was taken out, creating an open, airy and inviting space. A working kitchen also was added on the covered outdoor balcony to further capitalize on the spectacular view.

The master bathroom also was completely rearranged to make room for an enlarged  shower and a large walk-in closet. A renter’s closet in the master suite also was added.

Cameron & Cameron also installed new flooring, tile, door casings and hardware, as well as added trimwork details and buttboard on the ceilings. Other improvements include painted poplar wood on the walls, new light fixtures, built-in bunk beds in one guest bedroom, and new cabinets in all the bathrooms. Caron handled all the final selections, from the tile design to the colors.

IT DEFINITELY HAD AN ’80S BEACH VIBE...
– BRANDON EDWARDS, VICE PRESIDENT OF OPERATIONS FOR CAMERON 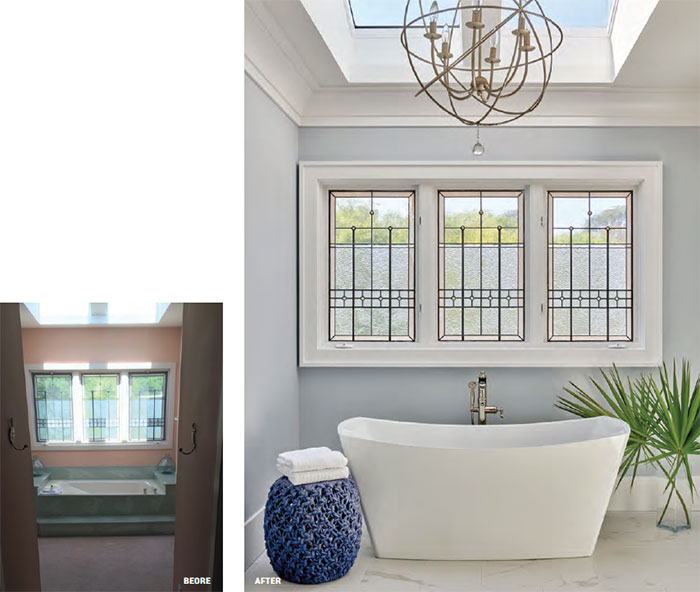 “From where we were in the beginning to where it is now, it’s a very good feeling, very inviting and warm,” Edwards said.