Architect William Court knows a thing or two about transforming the ordinary and everyday into the extraordinary. To him, it’s all in the details.

The ordinary — an open floorplan for a home’s lower level — has been a Lowcountry staple for decades. To elevate that floorplan to extraordinary, Court brought striking architectural elements from the outside in, creating design individual living space niches. 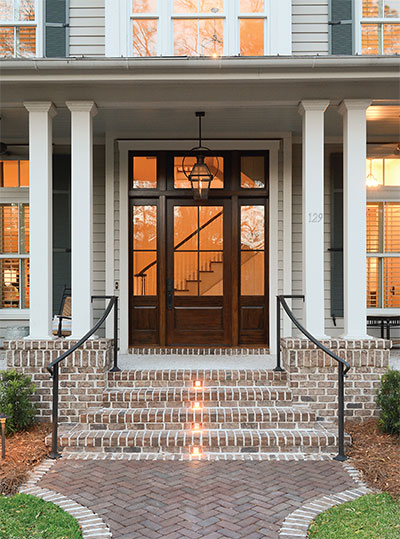 “We re-envisioned exterior transoms into a more interior space and interior feature to separate rooms and to keep them completely open,” said Court, who founded Bluffton’s Court Atkins Architects in 2004 with business partner James Atkins. “The goal is to keep the spaces open but to feel distinct … (The transom) is a symmetrical connection from the kitchen to the living and dining space.”

Indeed, each room on the first floor of an elegantly understated 3,300-square-foot home in Palmetto Bluff is distinctly unique without walls because of the unimposing architectural touches Court added between rooms. The kitchen, separate “back” kitchen, informal dining room, living room, master suite and bathroom, owner’s entrance and screened porch share the first-floor space.

“It’s less about creating specific rooms and much more about creating open living than you might have seen in historic Savannah and Charleston,” said Court, who graduated from the University of Cincinnati with a degree in architecture. “It’s a clever sort of play between a historically appropriate Southern coastal home from Savannah or Charleston and a completely wide-open, warm and inviting interior.” 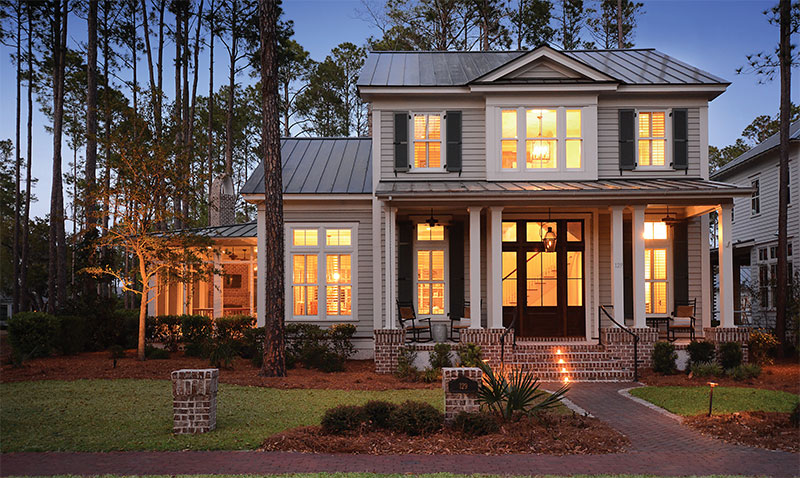 Court describes the design and craftsmanship on display throughout the three-bedroom home as “natural light, charm, detail, trim and millwork.”

Tony and Patti Berner of Ponchatoula, Louisiana — a small town between Baton Rouge and New Orleans — decided to hire Court and his team to design their Lowcountry home four years ago in part because of Court’s impressive portfolio. But it was his personality that really sealed the deal. 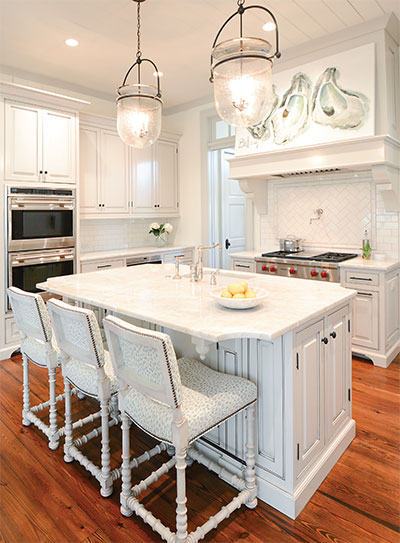 “He is down to earth; he listened to all of our wants and needs, and he didn’t overbuild,” said Patti, who with her husband has two grown sons and five grandchildren. “We wanted a house that was quiet and cozy. William and his whole organization worked wonderfully with us.”

She extended the same compliment to their builder, Richard Best Custom Homes in Bluffton.

“The three of us were a good group,” she said. “If we were to build another home, I would use the same architect and the same builder.”

The couple — she’s retired after working alongside her husband for 40 years at a large food distribution center that he manages after selling the three-generation family-owned business last summer — have visited their South Wilson neighborhood home, just a short walk to the May River and Village Green, nearly every month since construction was completed in late 2014. 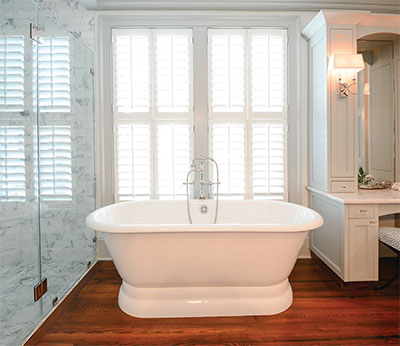 Their sons, daughters-in-law and grandkids also are right at home when they visit the Stallings Island Road residence thanks to the custom-built bunk beds and a double-bed in the two upstairs guest suites, complemented by large bathrooms and walk-in closets. A sitting room positioned at the front of the guest floor provides a comfortable place for guests to unwind.

“The house works out beautifully for all of our family,” Patti said. It also worked out well this spring when she hosted three of her sisters and her mom for a long girls’ weekend. “William hit the nail on the head. He built the exact home I wanted.”

The Berners’ favorite room is the oversized screened-in porch, which is unusually located on the one-third acre site. 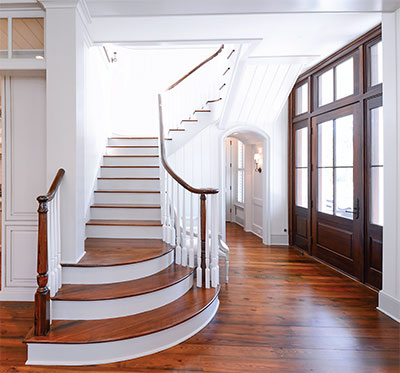 “Because the views are so great in front of the property, we actually put the screened outdoor living porches to the side of the house, not unlike what you would do in Charleston, so they could take advantage of views in both directions and get some great cross breezes,” Court said. The porch also faces the vacant lot that the Berners bought years ago and on which they plan to build a courtyard garden, a second garage, a game room and a social area.

“We’re really maximizing the outdoor living space and garden space,” said Court, who also will design the new second structure soon. “Tony wants a space to fry turkeys and use a smoker in a big outdoor kitchen.”

When the couple is in Bluffton, the couple spends their leisure time on the porch, sitting in front of the custom-designed brick fireplace, watching the widescreen television, swinging on a suspended couch, cooking at the outdoor kitchen or eating at an informal table. A great deal of attention went into even the tiniest of details to make this space the perfect Lowcountry oasis. For example, the octagonal-shaped ceiling is accented by trim detailing.

“It’s our most favorite room of the house,” Patti said. “We love the idea of sitting outside, being with nature, watching a ballgame on TV, cooking and eating outside, and just enjoying.” 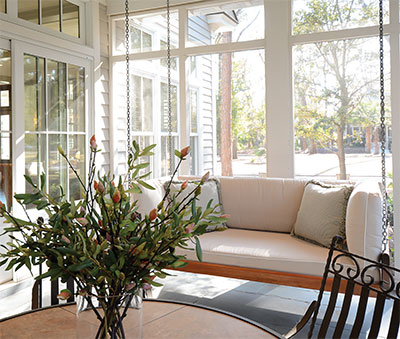 The comfortable great room accesses the porch through a 16-by-10-foot sliding glass French wood door with glass transoms above.

“It opens up the outdoor space to the indoor space,” Court said, adding that the strategic placement of the home’s abundant windows also creates the same effect. “Almost floor-to-ceiling oversized double-hungs and sliding glass walls with interior transoms leading into the kitchen just let more light in.”

The kitchen showcases a painted v-grooved wood ceiling to “create different textures in spaces in a subtle way” and custom-built cabinetry, Court said.

Upon approaching the house on a paving stone walkway, a handful of brick steps with powder-coated aluminum railings lead to a Lowcountry-style porch lit by gas lanterns and anchored by majestic columns, where visitors are greeted by a stately French three-panel mahogany front door. 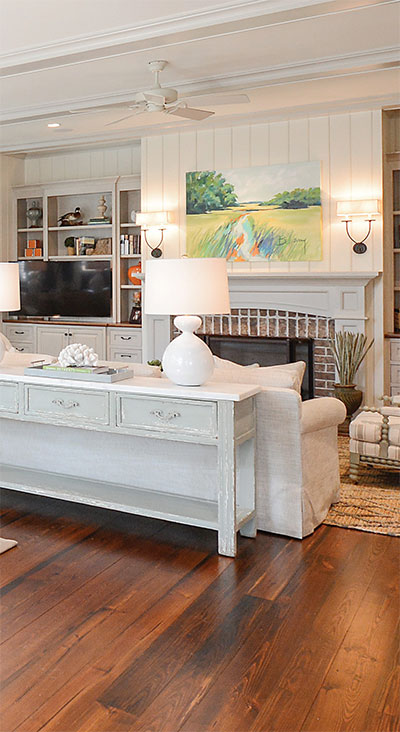 “Although it’s a very open floor plan, the minute you come through the front door, you are greeted by a very traditional Southern foyer and a curve-linear staircase that takes you to the second floor.”

Down the hallway, a vaulted wood ceiling provides the skyscape in the spacious master suite.

“The master suite is essentially the oasis at the rear of the property that looks over the courtyard gardens,” Court said. “There’s a tremendous amount of glass in that room — plus a boxed bay window and a traditional bathroom with a free-standing tub.”

Throughout the home are nearly 12-foot ceilings and stained reclaimed pine wood flooring finished on-site during the home’s construction.

“The Berners really wanted to be part of the streetscape that already exists along the park in front of the house,” Court said. “They wanted something that was a little more in keeping with the historical context of Savannah and Charleston — a traditional, casual Lowcountry home. So, for example, we added more detail in the soffet and fascia rather than your traditional pit bows rafter tails. We’re actually designing a bit more of a traditional Savannah garden home feel to the house.”

It’s this attention to detail that helps Court turn the average house unto a stunning home.