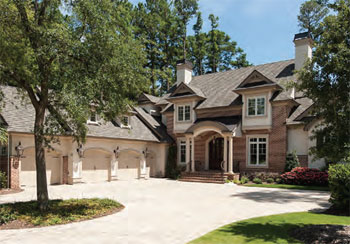 THE SIGHTLINE STRETCHING FROM FRONT TO BACK DOWN THE GRAND ENTRANCEWAY INTO THE “HEARTH” ROOM AND THROUGH THE WINDOWS TO THE LAGOON AND 15TH GREEN IS DRAMATIC AND FAR REACHING. THE SPACE IS OPEN, WELCOMING

Don and Angie McGeorge envisioned living in such an environment when they teamed up with H2 Builders in the summer of 2011 to bring their vision to life at Berkeley Hall, a private golf community in Bluffton. The Kentucky natives wanted their new primary residence to blend traditional design with Lowcountry touches and the formal with the casual.

“We love our house,” Angie said. “The house feels like it’s warm and got history; it doesn’t feel like a new house … We wanted a casual elegance rather than a stuffy formal feel. It’s an Old World feeling.” 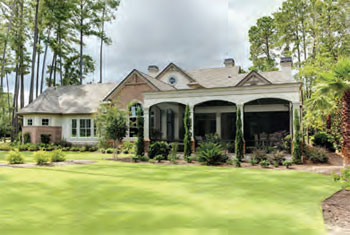 The custom-crafted home, one of 258 elegant residences that H2 Builders of Bluffton has constructed since 1996, borrows from nature to achieve that “feel” by using oyster shells and tabby, brick floors, Douglas fir trusses, hickory hardwood flooring and fieldstone. Eleven-foot ceilings throughout the downstairs culminate in a 20-foot-high tower of light with trusses in the relaxing hearth room with fireplace.

H2 founder and president Todd Hawk said the two story 5,800-square-foot house showcases “details. It’s not your typical house in our area.” The Tennessee native, whose company is the largest custom home builder in the area with construction prices ranging from $400,000 to more than $4 million, added, “It’s the details with brick and trusses and stonework and a lot of trim work…It’s a blend of different styles.”

Nowhere is the captivating architecture and details more on display than in the expansive kitchen. “Angie’s kitchen is the center of the house,” said Don, who retired in 2009 from The Kroger Co. in Cincinnati as president and chief operating officer. “She loves to cook, and I love to eat.” 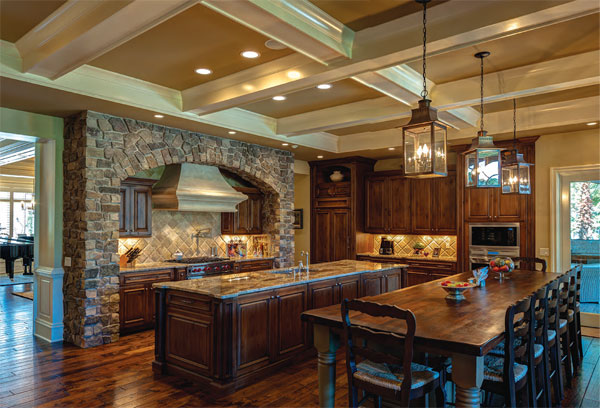 Two islands — one with a granite countertop by Distinctive Granite and Marble and the other with “farm table” stressed plank by Café Countertops — hickory flooring a caste plaster range hood from Savannah Hardscapes framed by an arch of fieldstone and tile backsplash, custom cabinetry done by The Cabinet Gallery, and coffered ceilings with beams provide all the aesthetic appointments an at-home chef could want. All of the stonework and carpentry was done in-house by H2 craftsmen. 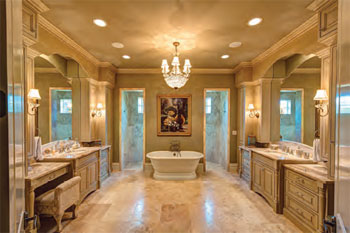 “I sat on the floor and drew out all the ceiling detail,” Hawk recalled. “We wanted to make sure it all worked out with the lighting, so we had to plan these out during framing so the beams would not interfere with the lights lining up over the island…We had to reframe the ceiling to make all this layout perfect.”

Off to the side of the kitchen is Angie’s desktop area overlooking the 372-square-foot courtyard with fiepit. The lounge — or “hunting lodge” as he calls it — accesses the courtyard and is homey with a fieplace framed by exposed brick and tabby, wood trusses, a wet bar and a humidor tucked inside a vintage telephone booth.

They spend much of their leisure time together outside in the open-air lanai, a 950-square-foot oasis of Lowcountry lifestyle complete with patio, fierplace, cooking station, big-screen television, pool and gorgeous vistas. 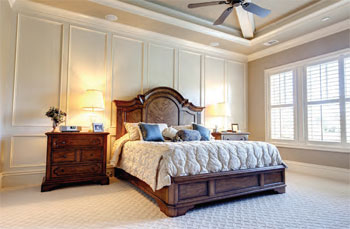 “We love the view,” said Don. “That’s what sold us on the (half-acre) lot,” which they purchased on Holly Grove Road in 2010. What sold them on building in Berkeley Hall after buying a getaway cottage house there in 2004 were the two championship golf courses, other community amenities, and especially its residents.

“The truth is, for me, we chose to build here because of the community … the people are just fabulous,” Don said. “We have tremendous friends.” 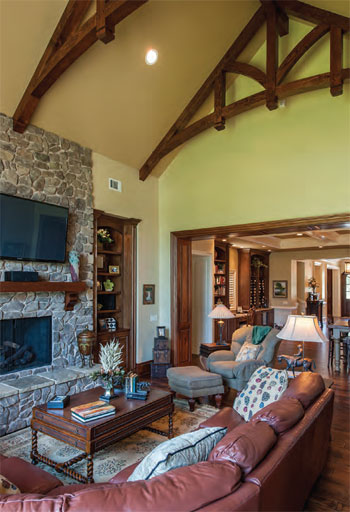 The open floor plan, expansive space inside and out, and room-to-room comfort and ease of movement allow the couple to comfortably host upward of 100 guests. “It’s very open and easy for entertaining,” he said. “Nobody is blocked by walls; it’s open and people can roam about … we want people to feel like our home is your home.”

The residence — which boasts a three-and-a-half car garage, four bedrooms, four full- and two half-baths including an awardwinning bathroom with a “walk-through” shower, an office living and dining rooms, an exercise room, a sitting room and an elevator shaft — won the prestigious LightHouse Industry Award in 2013 for “Best Overall” new home in its category.

Construction on the residence began in January 2012 and was completed in March 2013, when the McGeorges moved in. The “shared vision” of what the homeowners wanted and what Hawk delivered was the collaboration of H2’s team, architect Shoreline Design Inc. and J Banks Design Group Inc., both on Hilton Head Island. Grayco Inc. in Bluffton provided the millwork and other supplies.

“There wasn’t any left or right turns in the building process,” Don said. “We didn’t have a whole lot of changes or things we had to do because they got it … They knew what we wanted, we knew what we wanted so it went very very smoothly.”