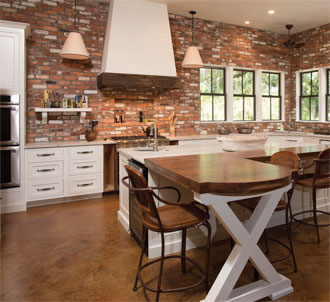 WHEN DR. RICHARD AND ANN WALTON BEGAN LOOKING FOR A RETIREMENT AREA A FEW YEARS AGO, THEY KEPT RETURNING TO SPRING ISLAND.

They scoured the Lowcountry from Charleston to Jacksonville — but nothing compared to this 3,000-acre nature preserve and secluded residential community set amidst a maritime forest teeming with loblolly pines, live oak trees, creeks, ponds, rivers, marshes, abundant wildlife and flora.

“We kept looking around and kept coming back … we loved it,” the physician said. “When we drove onto Spring Island, I thought, ‘Wow, this must be the most beautiful place I’ve ever seen.’ ”

So they bought more than two acres in 2007, spent 13 months building their custom home on Bee Tree Drive and moved in to their nearly 3,000-square-foot primary residence last August.

The casually elegant interior is as environmentally “green,” clean and open as the lush environment is outside their windows, doors and screened porch. 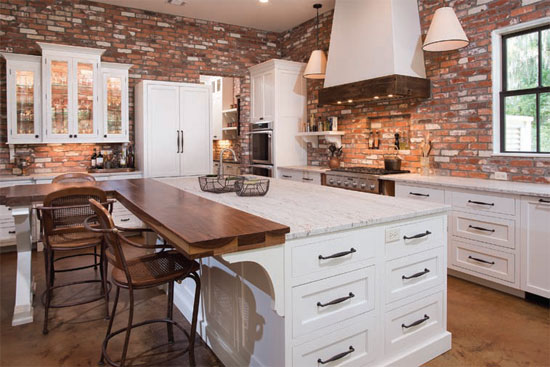 “We wanted to bring the outdoors in and have a very open home,” said Ann, who is in global sales for a major corporation. “Living ‘green’ goes along with the Spring Island philosophy: being able to live in a nature preserve and be able to maintain it and pass it on,” Richard said.

Perhaps the most striking design element of their two-bedroom, two-and-a-half bathroom main living space and one-bedroom, onebath guest cottage is the extensive use of reclaimed brick and wood. Recycled heart-pine beams removed from a mill in Tennessee adorn the ceilings in the foyer, living room, dining room and kitchen. The same recycled and restored heart pine sits atop the mantle in the great room fireplace, and composes the stairway and upstairs flooring. 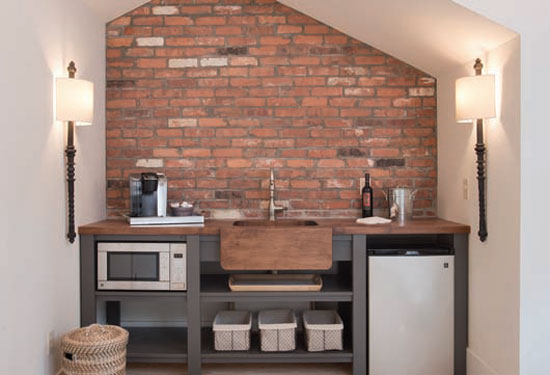 All of the exposed brick throughout the 2013 LightHouse awardwinning home can tell interesting stories of past lives in other locales. The red common brick stretching across the entire backsplash in the Walton’s spacious kitchen began its rich history in an old feed/seed company building and stable on Bay Street in Savannah more than 100 years ago, relates builder Patricia Strimpfel, co-owner, with her husband Ron, of Reclamation by Design Ltd. in Bluffton. Brick also provides visual highlights and depth in the “working pantry” off the kitchen, the master bathroom on the wall behind the tub, and the kitchenette in the guest cottage above the garage.

Unlike new brick, reclaimed brick is toxic-free but does require considerable labor cleaning years-old mortar and repalletizing it. It’s also more costly than new brick, but the enhanced aesthetic appeal is priceless. 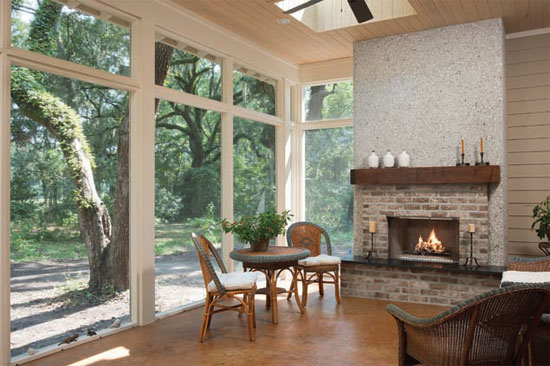 “The end result is that there’s a character you cannot get (anywhere else),” said Strimpfel, who is president of the Hilton Head Area Home Builders Association. “People try to take new material and make it look old and antique, but it just doesn’t have the character that the real thing has.”

As its company name suggests, Reclamation by Design — and its sister company, Reclaimed Building Materials Inc. — has been on the bandwagon for using reclaimed materials since its founding in 2008. 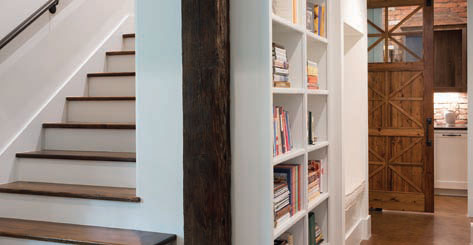 “Our mission statement is that we’re passionate reclaiming the artistry and mastery of craftsman from bygone eras, when constructing and building was meant to last a lifetime, not 20 years,” said Strimpfel, who handles day-to-day operations and project management for the two companies. “Using reclaimed material is not an easy thing to do…you have to be a master at being able to implement it. You have to have an artist’s eye for detail.”

For the Strimpfels, both Ohio natives who moved to Hilton Head Island in 1978, recycling has always been a part of their life. “I grew up on a farm and when you grow up on a farm, you compost, you recycle, you save everything and reuse it,” she said. “Everything comes from five generations back and just gets passed on. It was a way of life.” She noted that in the “bigger picture,” reusing and reclaiming building materials reduces waste and avoids being dumped in landfills. 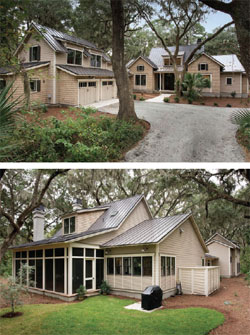 The Waltons, both Mississippi natives who moved south from Michigan in 2009, endorsed the concept enthusiastically. ”We very much liked the idea of using as much reclaimed material as was reasonable,” said Richard, pointing out examples around the house as he spoke.

Reclaimed wood also can be found at the custom-rebuilt barn door at the pantry, a swinging door at the homeowner’s entrance, and special touches by woodworker Mark of Excellence on Hilton Head in much of the cabinetry, spice cabinets, mail slots in one of the office desks and a bathroom mirror.

Rest assured, the Waltons breathe contentedly and healthily every day as they enjoy their Lowcountry “sanctuary” along the 12th fairway of the Old Tabby Links.