Quinn, who will work out of the Bluffton office, has worked in the spa industry since 2003. She has experience working in luxury spas including Forbes Five Star, AAA Five Diamond, Leading Spas of the World, and Relais & Châteaux establishments. When she moved to the Lowcountry, she met a local Realtor who inspired her to pursue a career in real estate.

Martin, who will work out of the Sun City-Okatie office, has more than 20 years in the real estate business. She works closely with the owners of the area’s most prestigious homes.

Brown, who will work out of the Beaufort office, completed six years in the United States Air Force. After her time in the military, she obtained her real estate license in 2007. Brown graduated with a nursing degree in 2019. 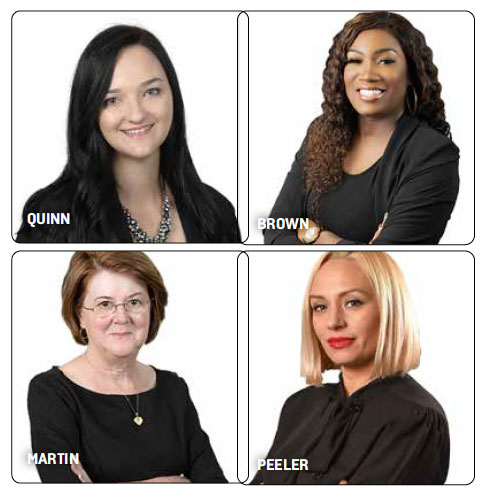 Joy Peeler joins Weichert Realtors as its new Beaufort Administrator & Recruiting/Marketing Coordinator. She will work out of the Beaufort office. Peeler, who is a native of Hilton Head Island, has spent many years working in hospitality in Beaufort County. She has worked for a timeshare company up to a Forbes 5-star luxury resort.

According to the December Housing Supply Overview from the Hilton Head Area Association of Realtors, from January 2021 to December 2021, pending sales in the Hilton Head region were up 1.2 percent. The price range with the largest gain in sales was the $650, 001 and above range, which increased 26.3 percent. The overall median sales price was up 11.7 percent to $410,000. The property type with the largest price gain was the condos/villas segment, where prices increased 18.2 percent to $325,000. Market-wide, inventory levels were down 50.8 percent. The property type that lost the least inventory was the condo segment, which decreased 34.9 percent.

Justin Keown has joined Berkshire Hathaway HomeServices Bay Street Realty Group as an agent. A South Carolina native, in Montgomery, Ala., he received the 2021 Top Producer of the Year Award. He’s a supporter of breast cancer awareness through The American Cancer Society’s Real Men Wear Pink campaign and is involved with Amvets Post No. 70 in Port Royal.