Cameron Clark has joined Collins Group Realty as listings coordinator. He will provide comprehensive support and assistance to CGR’s listings team in the processing and logistics of properties listed in the Lowcountry. Clark is a graduate of the University of South Carolina. He previously worked as House of Representatives page at the South Carolina Statehouse.

Stephen Stansfield has joined Century 21 Diamond Realty as an agent. Stansfield has lived in the area since 2002. An accomplished musician, he has performed throughout the Lowcountry. He is the father of two school-aged children. 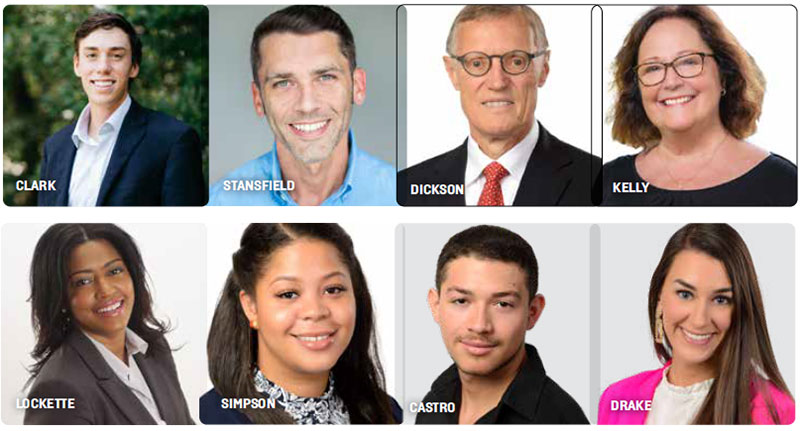 Bob Dickson, Lou Ann Kelly, Natasha Simpson, and Christie Lockette have joined the team at Weichert Realtors. Dickson will work out of the Bluffton office. He was formerly a CFO and a CPA. Dickson also writes a weekly newsletter, “Real Estate SmartBrief,” to keep his contacts informed about happenings in the real estate markets, nationally and in the Beaufort County/Hilton Head and Bluffton areas.

Kelly, who will work out of the Sun City/Okatie office, began her real estate career as an agent in New Jersey. She became a Circle of Excellence sales associate. Kelly and her husband also owned and operated a commercial photography studio in New Jersey.

Lockette, who will work out of the Savannah office, bought her first home at age 22, and understands the advantages of leveraging real estate has identified her true purpose.

Chris Castro and Makayla Drake have joined Moul, Realtors as agents. Castro has a work ethic that has been passed down from generations. He is fluent in Spanish. Drake is a second-generation real estate agent.

Hays McDaniel has been hired as an associate broker at Berkshire Hathaway HomeServices Bay Street Realty Group in their South Carolina offices. Hays recently graduated from the University of South Carolina with a bachelor’s degree in business administration. He is a Beaufort native.

The Fannie Mae Home Purchase Sentiment Index decreased 3.9 points to 75.8 in July, as consumers continue to report concerns related to high home prices and a lack of homes for sale, according to Fannie Mae housing survey. On the buy side, 66 percent of respondents said it’s a bad time to buy a home, up from 64 percent last month. On the sell side, 75 percent of respondents said it’s a good time to sell, down slightly from 77 percent last month, the report said. “Two of the segments perhaps best positioned to purchase — consumers aged 35-44 and those with middle-to-higher income levels — have indicated even more pessimism than other groups,” said Doug Duncan, Fannie Mae Senior Vice President and Chief Economist.

A Smartest Dollar study that looks at the renter wage gap—or the gap between renters’ actual (estimated) wages and the wages they need to make in order to afford the median rent for a one-bedroom rental where they live—shows the hourly wage needed to afford a one-bedroom rental in the Hilton Head Island-Bluffton area is $21.15, but the estimated hourly wage for renters in Hilton Head Island-Bluffton is $11.16. The study said, out of all small U.S. metros, the Hilton Head Island-Bluffton area has the 10th largest renter wage gap (-47.3%). The Smartest Dollar analyzed data from HUD, the BLS and the U.S. Census Bureau. Santa Cruz-Watsonville, California ranked at the top of the list.