Delvecchio will work out of the Sun City office. He grew up working in his family business building custom homes throughout Connecticut. He moved to Scottsdale, Arizona, and became a partner in a real estate firm selling luxury homes in Scottsdale and Paradise Valley.

Whitesell, who will work out of the Hilton Head Island office, was a newcomer to New Jersey but was awarded Rookie of the Year in 2018 and became a member of the Executive Club, the Million Dollar Club, and received the 2019 NJ Realtors Circle of Excellence Sales Award. She was also awarded the Enterprise Award in 2019 from Weichert Realtors. In 2020, Downing received the Directors Club and Company Pride Awards.

Bowen will work out of the Bluffton office. He is the founder of the Bluffton Group. A Bluffton native, he holds a bachelor’s degree in psychology from the University of Colorado. Prior to venturing into real estate, Bowen was a manager for retail boating and fishing stores in Hilton Head, Columbia S.C., Charlotte N.C., and Denver, Co. 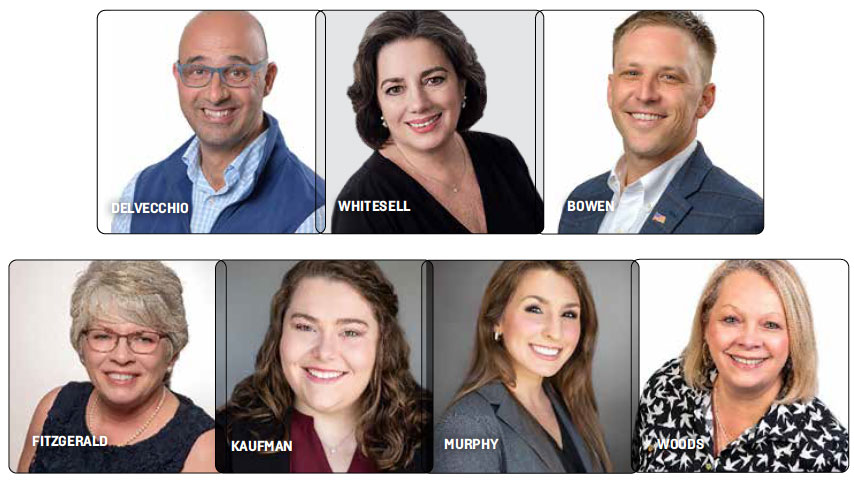 Anne Fitzgerald joins Century 21 as an agent. Originally from Connecticut, she and her husband have lived in Bluffton since 2015. In Connecticut she worked in the insurance industry as a litigation manager within the complex-claims arena. Fitzgerald received the Hilton Head Area Realtors Service Award for 2019.

Rachel Kaufman is an Atlanta native who moved to Hilton Head after graduating from Kennesaw State University with a business degree.

Carol Woods has a strong background in real estate sales. A former Texas resident, she and her husband, Jimmie, a retired Marine, moved to the Beaufort area in 2002. Their family includes six children and seven grandchildren.

Claudia G. Murphy is an honors graduate of Furman University with a degree in communication studies. She played a prominent role on the Furman women’s NCAA Division I soccer team. She is a lifelong resident of the Lowcountry.

According to the May Housing Supply Overview from the Hilton Head Area Association of Realtors, from June 2020 to May 2021 pending sales in the Hilton Head region were up 64.4 percent. The price range with the largest gain in sales was the $650, 001-and-above range, which increased 142.9 percent. The overall median sales price was up 16.5 percent to $384, 418. The property type with the largest price gain was the condos/villas segment, where prices increased 20.8 percent to $290,000. Market-wide, inventory levels were down 71.3 percent. The property type that lost the least inventory was the condos segment, which decreased 68.9 percent.

South Carolina real estate was strong in April, according to South Carolina Realtors statewide real estate market reports. Sales were up 41% from last year. Coastal areas continue to be hot spots, a news release said, with areas like Charleston, Hilton Head, Beaufort and Myrtle Beach leading the state in sales. Statewide, prices were up almost 15% compared to this time last year. Nearly every metro area tracked by the National Association of Realtors — 99% — recorded year-over-year price increases in the first quarter of 2021, according to the latest quarterly report released by NAR.

Inventory in South Carolina continues to dwindle. In Charleston there were 80% fewer homes on the market over the latest 12-month period — a record for that region, according to South Carolina Realtors.

HOTTEST SPOTS TO BE A REAL ESTATE AGENT

WalletHub released its report on 2021’s Best Places to Be a Real Estate Agent, and South Carolina ranks among the prime areas. Charleston ranks 70th and Columbia is 80th. Seattle, Wash., is ranked No. 1. To determine the best markets for real-estate agents, WalletHub compared more than 170 U.S. cities across 22 key indicators of a healthy housing market, ranging from sales per agent to the annual median wage for real-estate agents to the housing-market health index, according to a news release. Stockton, Calif., has the most homes sold in the past year per real-estate agent (103.66). San Jose, Calif., listings had the fewest days on the market (37).  New York was the city with the most (178).