Weichert Realtors has added new agents to its team.

Bryan Nowak, who will work out of the Hilton Head office, is a firefighter/paramedic on Hilton Head Island. He grew up in Chicago and attended Illinois State University.

Jonathan Shorter, who will work out of the Hilton Head office, graduated from N.C. State University with a degree in chemical engineering. He spent 20 years progressing through ExxonMobil’s executive leadership development. Shorter completed an MBA from Duke University’s Fuqua School of Business. 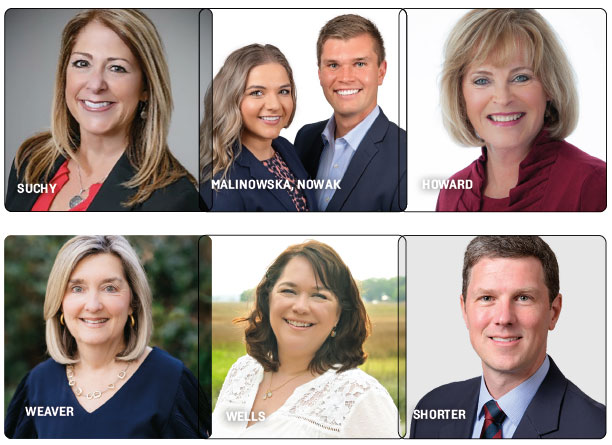 Vickie Pryor, a mother of three children, graduated college with a psychology degree. She won “Rookie of the Year” during her first year in real estate. Most of her real estate career was spent in Texas, but she also had licenses in Virginia and Tennessee. Pryor will work out of the Sun City/Okatie office.

Van Smith, originally from New York, earned business and real estate degrees from Ashford University. He also earned his master’s in Business in Leadership and Organizational Development. Smith will work out of the Savannah office.

Andria Ware will work out of the Savannah office. For about 18 years she has enjoyed a career working in sales for national retailers that serve the Savannah area. Ware also became a healthcare worker and master cosmetologist while working full-time as a retail sales professional.

Gen Suchy, Liz Page-Kramer, Gary Hughes and Jo Mauro have joined Century 21 as real estate agents. Suchy has worked for the last 35 years in the financial services industry, mainly for a Fortune 100 company. She is a licensed broker/ Realtor in North Carolina and sales associate in South Carolina.

Page-Kramer has been a full-time real estate agent for more than 29 years. She is licensed in Delaware, Maryland, and South Carolina, ranking in the top 1% of agents, based on sales.

Hughes has been a real estate agent for several years in Virginia and Tennessee. He brings a vast knowledge of home construction.

Mauro’s career in real estate began in New Jersey and continued for 24 years before relocating to South Carolina in 2007. She had a career in cosmetology, including as owner-operator of a hair salon.

Joan Weaver, a real estate specialist at Collins Group Realty, is celebrating her 16th year with the brokerage. Weaver is a top producer, specializing as a buyer’s agent on Hilton Head Island, a news release said. She also serves as a volunteer for Meals on Wheels, First Presbyterian Church and the Hilton Head Area Association of Realtors.

According to the March Housing Supply Overview from the Hilton Head Area Association of Realtors, from April 2020 to March 2021, pending sales in the Hilton Head region were up 48.9 percent. The price range with the largest gain in sales was the $650,001 and above range, which increased 134.5 percent. The overall median sales price was up 14.7 percent to $375, 000. The property type with the largest price gain was the condos/villas segment, where prices increased 16.7 percent to $280,000. Market-wide, inventory levels were down 72.4 percent. The property type that lost the least inventory was the single-family segment, which decreased 71.9 percent.

Jenny Wells has joined Dollenberg Properties of Carolina Realty Group. She is a licensed real estate agent who was previously with Keller Williams. Her sales volume earned her the distinction at Keller Williams of “Top 10 Agents” in 2020. Wells has her B.A. in business management from Hiram College and her MBA in leadership from Franklin Pierce University.

Berkshire Hathaway HomeServices Bay Street Realty Group was recently ranked the No. 1 brokerage in Beaufort, based on the “Lowcountry Regional MLS Quarter 1 Closed Transaction Rankings.” The recognition is calculated by volume and ranked at the close of each quarter.