Calvi will work out of the Beaufort office. Calvi has a degree in political science from Fordham University in the Bronx, N.Y., and a juris doctor degree from St. John’s University.

Castro, who will work out of the Bluffton office, grew up in Charlotte, N.C., and moved to the Lowcountry in 2016. He graduated from May River High School. 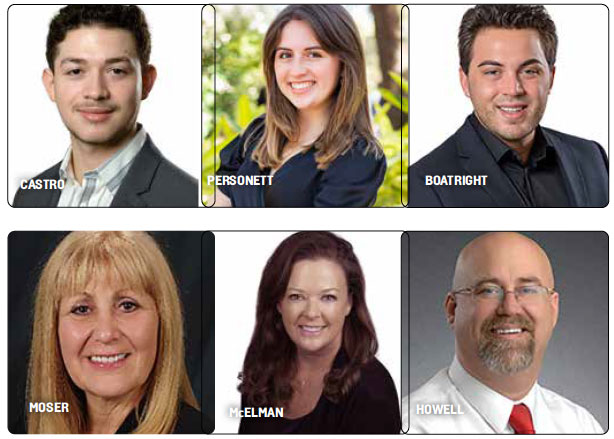 Michael Howell has been named sales manager at Century 21 Diamond Realty. He has an extensive background in law enforcement and management. Howell obtained his real estate license in Ohio and moved to Sun City six years ago.

White had a nearly 40-year career in banking. He has served on various civic and charitable organizations including Samaritan’s Purse Disaster Relief Team Member and the Board of Zoning Appeals for the Town of Hilton Head Island.

Parks is a disabled veteran of the United States Air Force with a law enforcement and management background. He was introduced to the real estate industry in 2015 after completing his MBA at the University of Nebraska at Omaha.

Moser, born and raised in New York City, moved to the Bluffton area after living in New Jersey. She began her career as a software designer and then became licensed as a real estate salesperson in 1998 and a real estate appraiser in 2001.

Bailey moved to Bluffton in 2018 from Texas, where she had enjoyed a 35-plus year career in real estate. She earned the Greater San Antonio Builders Association 2015 Summit Award “On Site Sales Professional of the Year.”

Kim McElman, an agent at Weichert Realtors, has been named the National Rookie of the Year for 2020.

The honor is awarded annually to the Weichert affiliated agent with the highest gross commission income who has been a commissioned agent for 18 months or less.  She earned the award among rookie agents from more than 260 Weichert-franchised companies in the country. “It’s been extremely rewarding building relationships and helping clients find their dream homes in the beautiful Hilton Head area,” McElman said.

According to the February Housing Supply Overview from the Hilton Head Area Association of Realtors from March 2020 to February 2021, pending sales in the Hilton Head region were up 37.6 percent. The overall median sales price was up 15 percent to $374,000. The property type with the largest price gain was the condos/villas segment, where prices increased 16.6 percent to $278,000. Market-wide, inventory levels were down 67.4 percent. The property type that lost the least inventory was the single-family segment, which decreased 67.1 percent.

Moving to small towns increased in 2020. According to moveBuddha, Hilton Head Island and Bluffton were popular towns to move to last year. Hilton Head ranked sixth, and Bluffton ranked eighth. The list was based on cities with populations between 5,000-50,000. Naples, Fla., ranked at the top. MoveBuddha tracks moving data on its website.