Martel, a Hilton Head native, specializes in working with first-time home buyers. She serves clients throughout the Hilton Head Island and Bluffton area.

Tracy has lived in the area more than eight years after moving here from Ohio. She has an MBA in business and a background in mortgage banking.

Reagan most recently served as a flight attendant for Jet Blue, based out of New York City’s John F. Kennedy International Airport.

Willy Fanning, Emily McCarthy and Nailah Marie Ellis have been added to the Weichert Realtors team as agents. Fanning will work out of the Sun City-Okatie office. Fanning began his Lowcountry real estate career in 1995. He is also active at the Hilton Head Area Association of Realtors, having been a trustee and has served as its Vice President.

McCarthy will work out of the Bluffton office. She grew up on Long Island, N.Y. and worked in digital advertising in New York for 10 years.  After relocating to Charleston in 2018, McCarthy has been working in real estate.  She moved to Hilton Head in August.

Ellis, who will work out of the Savannah office, is a native of Chicago, Ill. After graduating from high school, she graduated with an associate's degree in culinary arts in 2012 from the Culinary Institute of America. In 2017, Ellis was accepted into the ProFarmer Training Program at the Hudson Valley Farm Hub. 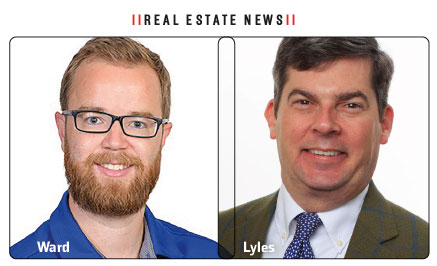 Josh Ward is welcomed as sales manager of the Beaufort office. He is a third-generation native of Beaufort. Ward has a degree in interdisciplinary studies with a focus in business and marketing with a minor in mathematics. He has also worked as a professional photographer and videographer.

Nominations are being accepted for Collins Group Realty’s second annual 200th Home Sale for Charity. In 2020, more than 3,600 nominations were submitted for more than 100 Lowcountry local 501(c)3 organizations. The real estate company donated $10,000 to two winning charities when it reached its 200th sale for the year. The real estate group is requesting nominations for Hilton Head-Bluffton area charities through March 31, via its website at CollinsGroupRealty.com/200thHomeSale. Ten finalists will be announced April 2.  Final voting will be April through July.

Shanti Bringas has joined Schembra Real Estate Group as real estate agent. Bringas is a lifelong Hilton Head Island resident with more than 22 years of experience in a variety of customer service roles, six of which have been spent as a local Realtor. She enjoys relaxing with her family on Hilton Head Island’s pristine beach, cooking healthy, weightlifting with her daughter who is a fitness competitor, and taking long walks with her husband, Johnny, and dog, Soliel.

Morris Lyles was recently installed as 2021 president of South Carolina Realtors. Lyles was SCR's 2020 president-elect and 2019 treasurer. He has been a Realtor since 1996, and is currently with ERA Wilder Realty, in Columbia.

Cindy Creamer is the president-elect. She has been a Realtor since 2006 with Dunes Real Estate on Hilton Head Island.

Rob Woodul is the association’s 2021 treasurer. He broker-in-charge of Carolina One Real Estate’s Charleston Central office.

Reah Smith is SCR’s 2021 secretary. Smith has been a Realtor since 2010 and a Resort and Second Home Property Specialist at Lake Keowee Real Estate since 2013.

Owen Tyler is SCR’s immediate past president. Tyler is a graduate of Clemson University with a background in accounting. He has been in real estate since 2001.

STUDY: SOUTH CAROLINA POPULAR SPOT TO MOVE TO IN 2020

South Carolina was the No. 2 state in the country were people moved to in 2020, according to United Van Lines’ 44th annual National Migration Study. According to the study, which tracks the company’s data for customers’ 2020 state-to-state migration patterns, South Carolina’s inbound migration (64%) among states experiencing more than 250 moves with United Van Lines was second to Idaho (70%). States people are leaving include New Jersey (70%), New York (67%) and Illinois (67%).

For retirement reasons, Montana and Delaware experienced more inbound moves than any other state at 41%, followed by Florida (39%) and South Carolina (38.5%), according to the study.