Demand to live in the Lowcountry has always been high

EDITOR’S NOTE: As part of Monthly’s yearlong 30th anniversary celebration, we are highlighting 30 years of different industries in each issue. This month, we feature the real estate industry and how it helped shape Hilton Head Island, Bluffton and the surrounding Lowcountry.

Back in 1985, when this magazine was founded, the Dow Jones stood at 1,546, a gallon of gas cost $1.10, Microsoft Windows 1.0 was released, about 17,000 year-round residents called the island home, Realtor Charles Sampson was named Hilton Head Island Young Man of the Year, pro golfer Bernhard Langer won the Heritage Classic tournament, and tennis player Chris Evert-Lloyd wowed the crowd at the WTA tournament at Harbour Town.

There were 18,000 residential dwelling units on the island 31 years ago, and a renovated four-bedroom, four-bathroom, second-row ocean home at South Forest Beach could have been yours for $255,000. A 1,700-square-foot villa boasting two bedrooms and two-and-a-half bathrooms with a lagoon and golf view at Palmetto Dunes listed for $147,900. The asking price for a South Beach four-bedroom, three-bathroom oceanfront home with swimming pool was $729,000. 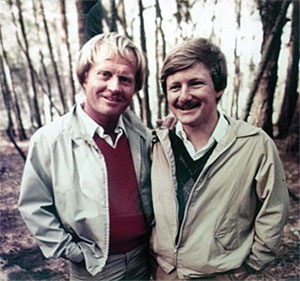 Also in 1985, Melrose, a Jack Nicklaus business partnership on Daufuskie Island, opened. Lots by lottery were sold for an average of $92,000 per site. Haig Point began selling lots and memberships on Daufuskie.

While the 1970s showed flashes of anxiety in the real estate industry because of strains from rapid growth, the ’80s became downright turbulent. Plantation ownership changes, cash-flow problems and court cases created a haze of market uncertainty. 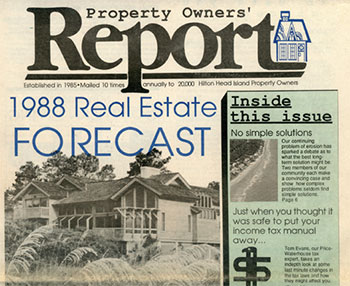 The town’s planning commission drafted and recommended to town council a “comprehensive plan” in 1985 to manage development and growth. By then, Sea Pines, Hilton Head Plantation, Port Royal Plantation, Palmetto Dunes including Shelter Cove, Shipyard, Wexford, Long Cove, Indigo Run, Spanish Wells and Skull Creek Point were already established private gated communities. (A Land Management Ordinance that limited the number of new structures that could be built was adopted the next year by Town Council.)

In 1986, Moss Creek Plantation (Bluffton’s first private golf community) property owners bought the 1,000-acre property from the developer. Each of the 44 shareholders committed $15,000 per share and a promise to purchase one lot. Today, Moss Creek showcases 963 homes minutes from the bridge.

In 1993, a full-size marsh lot at Windmill Harbour with 194 feet of Jarvis Creek waterfront was listed at $85,000. Dinner at Flamingo’s Café in Park Plaza for shrimp and scallops scampi-style cost $11.95.

By now in the ’90s, the local real estate industry continued humming along, helped immensely by new technology and the emergence of the internet.

The “modern day” real estate industry in the Lowcountry began in 1956 with Charles Fraser’s vision for developing a private plantation community in the heart of the island, calling it Sea Pines. There are now more than 3,800 homes and 2,000 villas spread throughout its 5,200 acres.

Overall on Hilton Head, there are more than 39,000 permanent residents living throughout its magnificent 12-mile long and 5-mile wide landscape.

Sixty years later with little, if any, land left on Hilton Head on which to build, “redevelopment” is the keyword at plantations to make properties “more attractive to buyers,” Beck said. 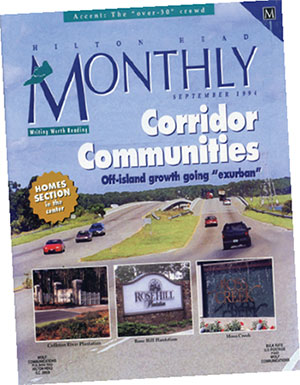 The Riverstone Group, which purchased Sea Pines Resort in 2005, spent about $50 million in capital improvements two years ago to revive the glory days at three storied sites inside the gates: The Plantation Club, Harbour Town golf links clubhouse and the iconic Beach Club. Homeowners and tourists alike are once again enjoying first-class world amenities.

Spring Lake Pool, a three-decades-old recreational amenity inside the 4,000-acre Hilton Head Plantation, has been receiving a dramatic $2.5 million upgrade over many months. It’s expected to re-open Memorial Weekend.

As homeowners and realtors will attest, major renovations such as these help boost property values and generate community buzz.

Bluffton, on the other hand, has plenty of room to grow. What once was a 1-square mile coastal town mushroomed in size through annexation beginning in 1987 to 54 square miles today.

The historic downtown, incorporated in 1852, received special attention when the town of Bluffton adopted a comprehensive plan in 2007 to help ensure the right amount and location of land uses while managing impacts to the environment, transportation system, public services and existing development. It was amended two years ago.

“Most importantly, it is essential that as Bluffton grows, the Town maintains its unique character or ‘state of mind,’ ” the plan stated.

As the American economy went bust from December 2007 to June 2009 — the duration of the recession, technically — so did the Hilton Head Island area real estate market. Ironically, in early 2007, the housing market on the island posted an all-time high with a median sales price of $395,000. 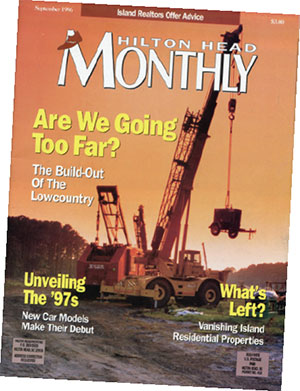 “When things started to change, they changed quickly,” said Jean Beck, executive vice president of the Hilton Head Area Association of Realtors. She said that at the market’s peak in early 2007, there were 1,370 Realtor agents keeping active showing and selling homes, but within three years, more than 500 of them had left the real estate business. Currently, 1,050 agents serve the market.

“That’s (the recession) come and gone now at this point,” said the Connecticut native. “Certainly people are back in the market and purchasing. They’re purchasing at a higher price point now than what they were when the market first started rebounding.”

It’s been a slow recovery for the past seven years and, by all accounts, the best that can be said is that the market is stable. Pockets of growth glimmer with promise, but other pockets with declining sales and prices still linger. Foreclosures and short sales in the area still persist.

For the past many years, luxury homes in the Lowcountry have been a tough sell. Homes in the $650,000 and lower ranges have shown some demand, and sales of residences priced at less than $350,000 have been as hot as the July sun on a windless summer’s day.

If there’s a trend in the Lowcountry real estate market, then the trend depends upon which price category you’re talking about. There is no trend across the board in local real estate; it all depends. Prices and home sales rise and fall and repeat the pattern all over again like the ever-changing local tides. (But at least the tides are predictable.)

“Like most industries, it’s evolved and had its changes,” said Beck, who has been managing the 900-member organization since 2008. “Real estate can be cyclical; it’s always going to have its ups and downs like it always has.” 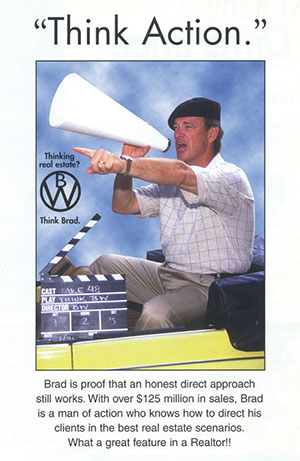 Meanwhile, across the bridges in Bluffton, home sales surged 71 percent in January from the previous month, but showed a 54 percent drop-off from a year earlier. The median sale price of homes in Bluffton in January was $221,500, down 6 percent from 2015.

In December 2015, the Spanish Wells/Jonesville area paced the island with an $845,373 median sales price, which was flat from the month before. Homes there spent 125 days on the market, hiltonheadproperties.biz reports.

Two homes were sold in December at Forest Beach, with a median price of $862,500, a dramatic 51 percent hike. Eleven homes exchanged owners in Sea Pines at a median price of $700,000, a 16 percent jump. Palmetto Hall and Hilton Head Plantation experienced sale price declines.

Homes sold at Wexford Plantation lingered an average of 333 days on the market, the longest wait on the island, while homes at Singleton/Folly Field spent slightly more than on the market.

“Some of these price points were down to four to six months,” Beck said. “As you get higher, you can be upwards of 18 to 22 months of inventory.”

Bluffton showed a robust real estate market, with 84 homes sold in December at a median price of $262,015, a 12 percent increase. Homes only spent an average of 37 days listed.

With all of the accolades Hilton Head and Bluffton have received over the years from the national media for their lifestyle choices (golf, tennis, bicycling, boating, fishing, etc.), beaches, restaurants, weather, low cost of living, low crime, arts, culture and history, it’s no wonder that the Lowcountry is the place to live, work, play and retire.