IS YOUR SPACE CALLING OUTFOR A TOUCH OF THE PAST?

Sustainable and reclaimed building materials are here to stay, experts say—they’re not just a design fad.

“Some want the look, and others want a piece of the past,” says William Court, partner at architectural firm Court Atkins Group. “The appeal, both residential and commercial, has grown over time.”

Even modern buildings can successfully incorporate reclaimed materials, which soften the space so it’s not cold or austere. Using rustic material in a minimal way to contrast old and new won’t overpower a contemporary look.

Mills, thrift stores, salvage yards, landfills and auction houses are sources for treasured finds. Businesses devoted solely to sourcing reclaimed materials use their expanded networks to do the searching for their clients. 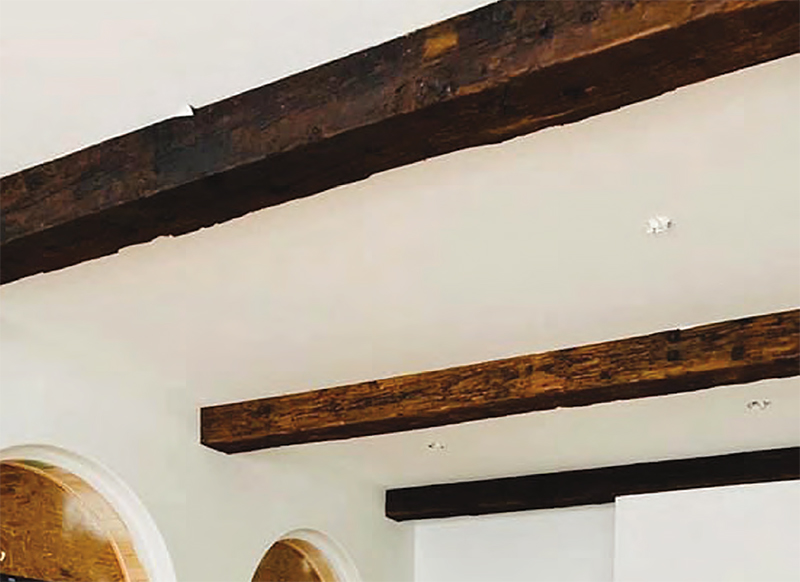 Salvaged brick—including antique Savannah grey brick—slate, ceramic, metal fixtures and cobbled stones are popular finds, but reclaimed wood varieties including heart pine, oak, cypress and chestnut remain the most requested reclaimed materials. A prime example of the Lowcountry’s love for repurposed wood can be seen at the original Inn at Palmetto Bluff and the hotel’s cottage suites.

Demolition projects can be goldmines for these remaining gems. This search-and-rescue approach matched Court’s vision when renovating his firm’s new location in Bluffton. Originally a post office, then the former Red Fish restaurant, its evolution was exciting in part due to the discovery of salvageable materials left behind. 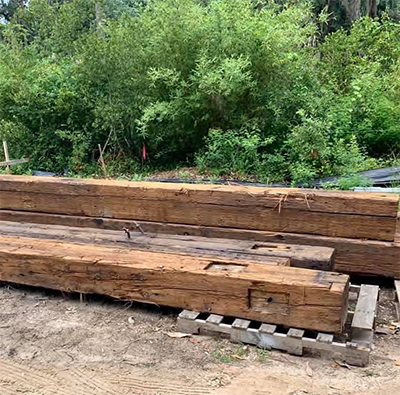 A 17-foot, solid mahogany bar was rescued and converted into a stunning gathering table and extra office shelving. Court Atkins kept the building’s original brick walls for a touch of warmth.

Usually, reclaimed materials aren’t in mint condition when they’re found. Care and craftsmanship are needed to restore them to their original splendor. Hilton Head builder Brian Esposito of Esposito Construction recently sent a team on a 10-hour trip to transport huge rafters and beams of antique heart pine from a decommissioned railroad house and carousel. Workers then invested many hours in reconditioning them.

“Reclaimed beams, in particular, are highly sought after and can be a great focal point,” said Esposito, adding that an average of nine hours per beam was needed on this project to extract the wood’s natural beauty.

“Proper preparation is unique to each piece,” he said.

Hot pressure washing, wire wheel brushing and sealing are routine. Other techniques are applied as appropriate and needed.

Sometimes reclaimed wood comes from the aftermath of natural disasters. Hurricane Matthew supplied Esposito with 28 high quality southern yellow pine, laurel oak, hickory and elm logs, which he used to create one-of-a-kind conference room tables for the Sea Pines Architectural Review Board and his own company.

Other craftsmen tout the environmental benefits of using reclaimed building materials and the high quality workmanship of bygone eras. 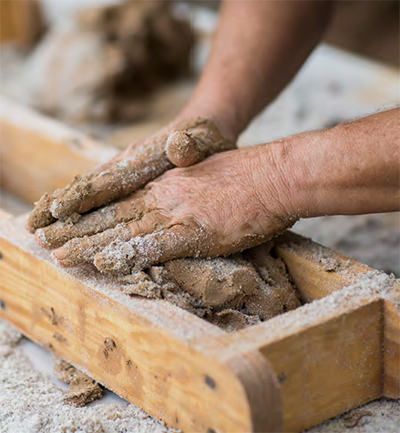 Using reclaimed materials delights many creative types. Philippe Feret, chef and owner of Hilton Head Social Bakery, loves the challenge and works until each piece is given “a voice of its own,” he said. Feret has collected wood flooring from JP Morgan’s New York City apartment, metal steps from the Brooklyn Bridge and sculpted legs from a table owned by Al Capone.

“I use recycled pieces because they are not perfect,” he said.

Patricia and Ron Strimpfel, who own Reclamation By Design in Bluffton, worked with a Hilton Head Island family who wanted their new home to include salvaged materials from an heirloom barn. Demolition of an old Savannah feed barn garnished them an incredible 150,000 grey bricks. The result was breathtaking, leaving them with an emotional connection to their heritage. But these historic bricks are increasingly hard to find.

Millions of renowned “Savannah Grey” handmade bricks were crafted by enslaved people in the 1800s at the former Hermitage Plantation on the banks of the Savannah River just north of the city. The bricks had a distinctive grayish color due to the composition of the clay and sediment harvested along the river. These over-sized bricks were abundant, inexpensive, and in high demand from 1820 until just after the Civil War.

Original Savannah Grey Bricks can still be seen in Savannah in stately homes and warehouses along River Street. The production of the Savannah Greys slowed around the time of the Civil War, and the bricks are now increasingly rare and valuable. In the 1950s, when “urban renewal” efforts resulted in the destruction of many historic masonry buildings, many Savannah Greys were reused in the construction of the mid-century suburban ranch neighborhoods. Now the iconic building blocks of old and new Savannah can fetch a hefty premium price ranging from $2.50-$6 per brick. Sadly, very few unused bricks remain and the only means of providing new stock is the demolition of further historic buildings.

To better understand the fabrication process and the assess the viability of small scale local brick manufacture, Savannah Technical College students in the Historic Preservation and Restoration program are working with renowned brick maker Jason Whitehead. Between 2,000 to 3,000 handmade bricks will be fired in a traditional clamp kiln at Lebanon Plantation. Experts have said it’s unlikely there will be a rebirth of largescale reproduction of Savannah Greys.

For more information, go to savannahtech.edu/HistoricHomeownersAcademy.