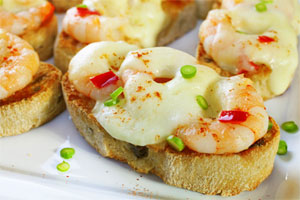 The wedding reception candy bar is a thing of the past. The make-your-own s’mores station has been played out. Mini cupcakes? So 2009.

So what hidden menu surprises are brides and grooms offering their guests these days?

The answer, oddly enough, is a late-night snack.

You might think offering wedding guests a late-night snack after serving them cocktails, hors d’oeuvres, a sit-down meal and a slice of fancy cake is excessive. But wedding experts say it makes sense when you think about it not as an extra course, but as the right complement to a moment in time. After all, you’re drinking, you’re dancing, it’s been awhile since dinner. Everyone loves to have a little something extra at that time.

Some of the tastiest options on the table are sweet, like cookies served with a shot glass of milk guests can spike with Kahlua. Others are savory, like a paper cone of Cajun fries drizzled with ranch dressing.

Katie Rosenberry was sold on the idea before her big day.

“I had seen all kinds of little finger foods and stuff as trends, and when I met with Leah (McCarthy of Weddings with Leah) I brought that up,” said Rosenberry, who married Geoff Rosenberry on Oct. 13, 2012, at a private home on Myrtle Island. “I wanted something really different, and Leah suggested fried egg sandwiches.”

Rosenberry had never had one before – “I wasn’t a big fan of fried eggs” – but she knew Geoff would love the idea.  That has been a hook with the late-night snack concept, McCarthy says:  It’s a way to get the groom involved, as all guys tune in when talk turns to food – particularly when talk turns to what food will be served after he and his buddies have had a few beers.

“It’s nice to do something the groom would really want; it’s a way for him to have a say in something,” she said.

At Rosenberry’s wedding there were passed hors d’oeuvres, a buffet dinner, and a formal cake cutting. Then the night opened up to speeches and dancing before the fried egg sandwiches appeared.

“Everybody loved them,” Rosenberry said. Perhaps the biggest fan was the bride herself, the same one who had never had a fried egg sandwich before her big day.  In typical fashion, she had spent most of the reception mingling and being a gracious hostess, and had eaten very little. McCarthy packed a special to-go box for the bride and groom with four fried egg sandwiches inside.

“I was so thankful, and they were so delicious,” Rosenberry said.

8
Mini PB&Js with a shot glass of milk