This past Halloween, while the island’s youngsters were going door to door in search of sugary delights, Justin Johnston and Beth Milbee were coming together in pursuit of something far sweeter than any candy. Surrounded by family and friends and framed by the natural majesty of Mitchelville Beach House, they said their “I Dos.”

And when they did, it marked the next chapter in a love story that began when two kids met at the Salty Dog Café.

It was a 22-year journey from the day they met at work to the day they were wed. But it’s clear from the last leg of their journey that the couple were eager to make things official. 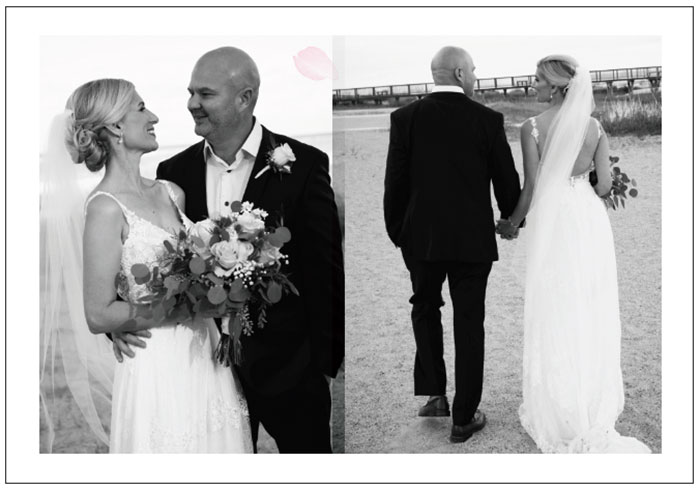 “We’re both pretty last minute about stuff,” said Beth with a laugh. “We were engaged in May and married in October.”

“It was just fun. But it was chaos leading up to it,” said Justin.

Added his bride, “He only had about three mild heart attacks that last week.”

If you’re curious how a simple walk down the aisle took 22 years, you should know that there were a few detours along the way. After meeting as newly minted employees at the Salty Dog Café, the couple saw their lives headed in different directions. 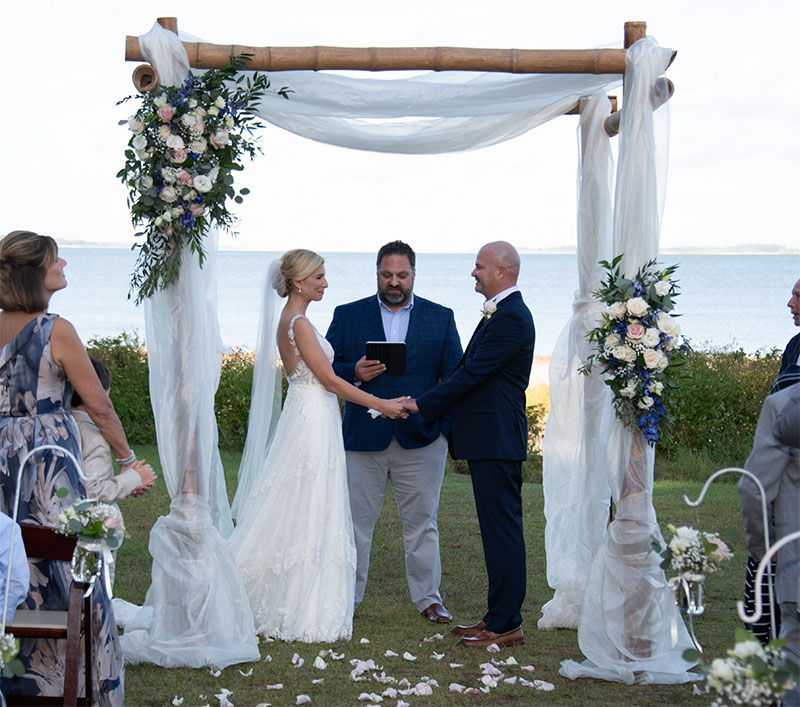 “I ended up moving back to Indianapolis to go to nursing school, and we tried to do the long-distance thing,” said Beth. “We were pretty serious, but I was so young. It was just too early. That’s why the theme of our wedding was, ‘It was always you.’ The timing was just always wrong.”

In the interim, each built a life. Beth had two children, Louis and Grace, while working in nursing. Justin stayed on Hilton Head, becoming a veteran of the F&B scene before launching the successful Bloody Point Mixing Co.

Just a few years ago, they found each other again on Facebook. 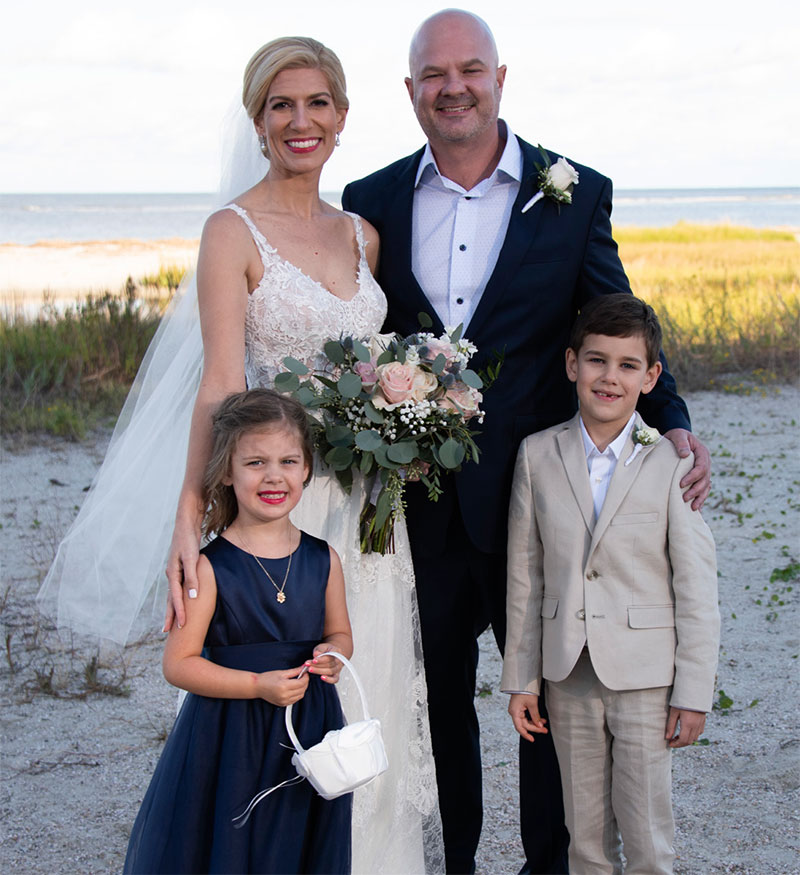 It didn’t take Justin long to pop the question after moving up to Indianapolis to be closer to Beth.

“I did it on my birthday, so I wouldn’t forget it,” he said, igniting another round of laughs from the happy couple. “As a ruse, I said we have to go check out this distillery in Traverse City, Michigan. I didn’t think she’d see that coming.” 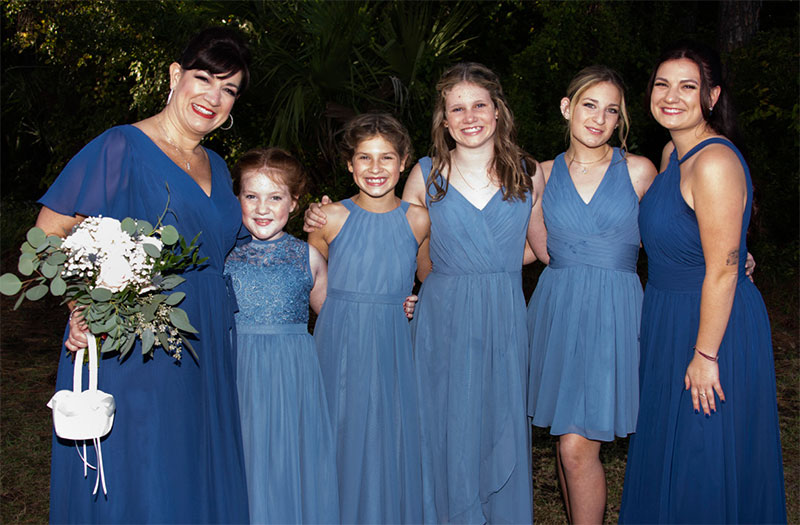 Despite it being May 4, the bitter Michigan cold was in full effect as Justin brought Beth out in front of the historic Mission Point Lighthouse and popped the question.

“It was gorgeous, but it was cold,” said Justin. “I didn’t get down on one knee because I didn’t think I’d be able to get back up.”

She said yes. And with just six months to plan the wedding, there were a lot of questions to answer. One, thankfully, was a no-brainer.

“Hilton Head Island has always had a spot in our hearts for both of us,” said Justin. “We wanted a destination wedding, and we know so many people in the industry.” 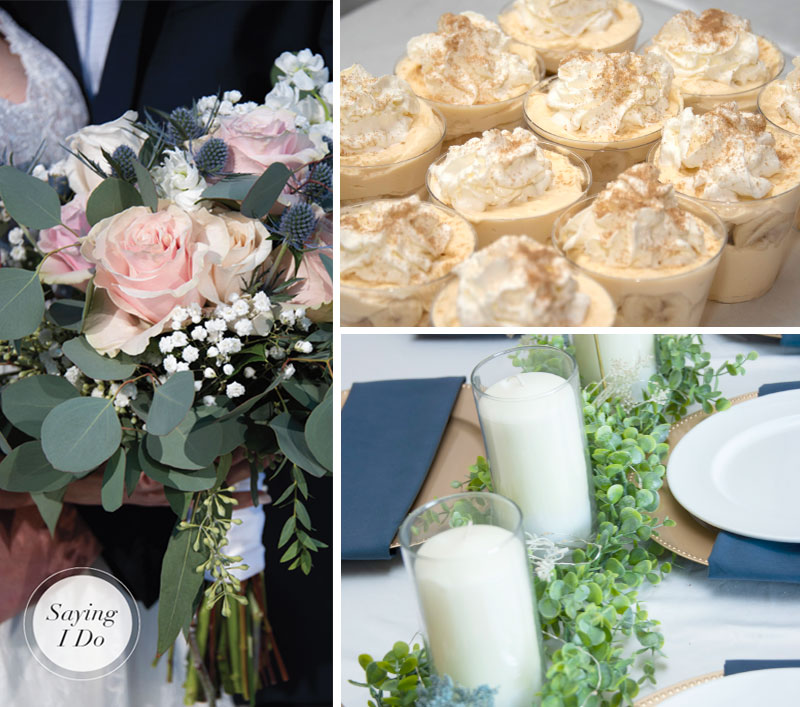 When you’ve spent as much time as Justin has in Hilton Head’s tightly knit hospitality world, you meet a few people who know how to put on a wedding. And the F&B crowd was only too happy to help with the festivities. 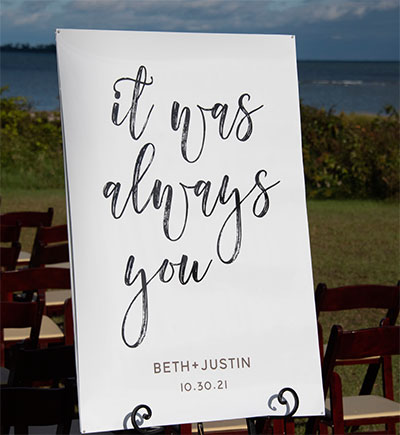 “It was really special to have Dave Peck from A Lowcountry Backyard, since he hired me when I first got down here and his wife Raina hired Beth,” said Justin.

Those friendships made the days leading up to the ceremony unforgettable, whether it was Dave Kemmerly surprising the couple with a post-Booze Cruise rendition of Rod Stewart’s, “Have I Told You Lately That I Love You,” (Beth’s parents’ song) on the deck at Salty Dog, John Rybicki opening his Lincoln & South Brewery for the rehearsal dinner or close friend Dave Thorton officiating.

Beth brought in her own talent, enlisting her children as flower and ring bearers, and inviting her niece to play violin during the ceremony.

“We knew basically everybody doing the services for us,” said Beth.

And with the help of a few friends and family, these two said their “I Dos” after 22 years.