“It’s true what they say,” marvels Lea Allen. “When you least expect it, it happens.”

“It’s a good time of our lives,” he adds, “The kids are grown, we’ve been through marriage before, and we’re more spontaneous.”

Nestled in their Moss Creek home, both are reminiscing about their whirlwind courtship and recent wedding. 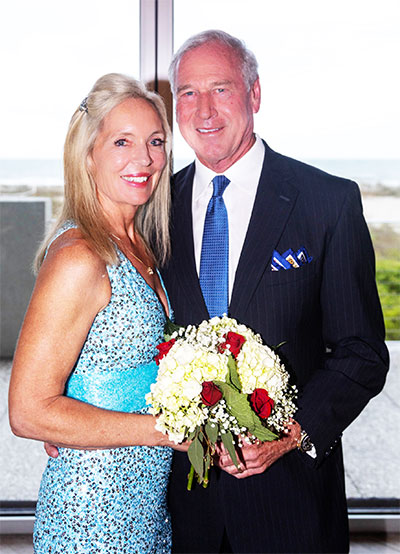 Seventeen months ago, neither Smith, a widower and premier builder in the area, nor Allen, divorced for over a decade and a successful real estate agent, had anticipated getting married again — especially to each other.

For 30 years their professional paths often crossed. Two winters ago, when Lea learned that Tommy’s wife had passed after a long battle with cancer, she reached out with condolences and support.

Long conversations ensued. As did hours-long walks. Then the unexpected — the fuse of romance sparked, just as the country entered lockdown. Their “safe place” became Tommy’s waterfront home.

“It caused us to spend a lot of quality time together, which could have gone either way,” laughs Lea.

Without normal distractions, they drew closer. Tennis, bike riding, and boating filled their days in between working remotely.

“That’s when I dubbed this house, the Peninsula Resort,” she teases.

“I hate what COVID did to the world,” adds Tommy, “but we had an unbelievable experience through it.”

After a surprise proposal last fall when Tommy presented Lea with a stunning, circular diamond ring, the couple began planning for a spring wedding. 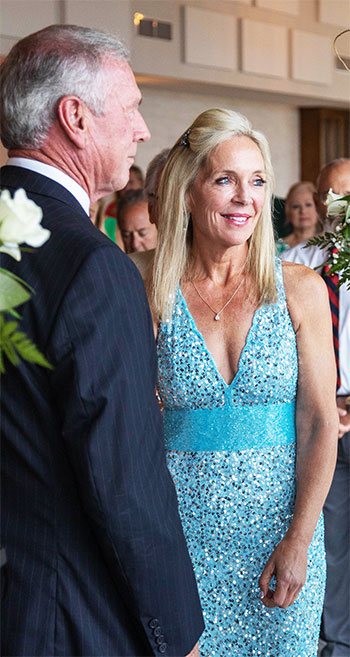 COVID restrictions limited venue choices, but the Grand Ocean Terrace at the Westin Hilton Head Island Resort offered everything the couple needed to pull off a large, yet safe, celebration. It also complemented Lea’s vision for an ocean theme.

Tommy, an amateur astronomer, set the time (6 p.m.-10 p.m.) and date (4/24) according to the arrival of high tide and the backdrop of a full moon. Because the venue didn’t require masks, Lea sent invitations out early so guests could make their own decisions about getting vaccinated prior to the event.

With intention, the couple designed an event celebrating their gratitude at finding love again. There would be no cake, no tossing of the bouquet, and no sit-down dinner. No bridesmaids, no gifts.

But there would be lots of champagne, live music, and multiple bouquets of white and blue hydrangeas dotted with red roses. Numerous food stations offered everything from lobster mac and cheese to pork belly pineapple skewers, grilled salmon, and a mashed potato martini bar.

Tommy insisted on stringing festive lights in the ballroom, and Lea chose an elegant blue formal dress instead of traditional white.

“No stress,” was the couple’s mantra, though Lea admits that having her dress arrive two days before the wedding wasn’t ideal. But stepping into the ballroom to join Tommy, she recalls only “tremendous happiness and energy.”

As guests, champaign flutes in-hand, formed a semi-circle around the couple,  the Reverend Greg Kronz of St. Luke’s Episcopal Church began the ceremony with the ocean in full view, thanks to a wall of sliding-glass doors.

“Because we had done marriage counseling, it gave Greg a lot of little jewels to add to the ceremony,” says Lea. “We took it very, very seriously.”

Per Tommy’s request, the band learned and played Joy of My Life by Chris Stapleton for the couple’s first dance. Then everything kicked into high gear.

“I think people were ready to celebrate,” says Lea, noting that without any stipulations about attire, nearly all of the more than 100 guests wore colorful, dressy outfits. Sore feet were the norm by evening’s end because once the dancing started, no one sat still.

“I pulled a J. Lo and eventually switched to a red dress and flip flops,” exclaims Lea.

Despite the rain, no one’s spirits were dampened. The mix of guests — their children, grandchildren, co-workers, sorority sisters, and even Lea’s 89-year-old father — left the party smiling. As did the bride and groom.

At last glance, they still are.