BRIDE AND GROOM PLANNED A WEEKEND OF CELEBRATION

When a wedding invitation includes an entire weekend full of events including a beach day, you know it’s going to be a good time. And that was the goal for Bluffton residents Ashley Smith and Douglas Lindblad when they were planning their wedding after getting engaged in 2018.

Like many modern-day couples, the pair first met through a dating app. But Hurricane Matthew delayed their first date when Ashley and her children evacuated to North Carolina, and Doug, who was doing tree work at the time, stayed on Hilton Head Island to help in the aftermath of the storm. Doug was also a member of the National Guard and was waiting to hear if he was going to get called up.

“We spent most of that initial time talking about what was going on and the situation with the storm and just the emotions of it all,” Ashley said about the unique beginning of their relationship. 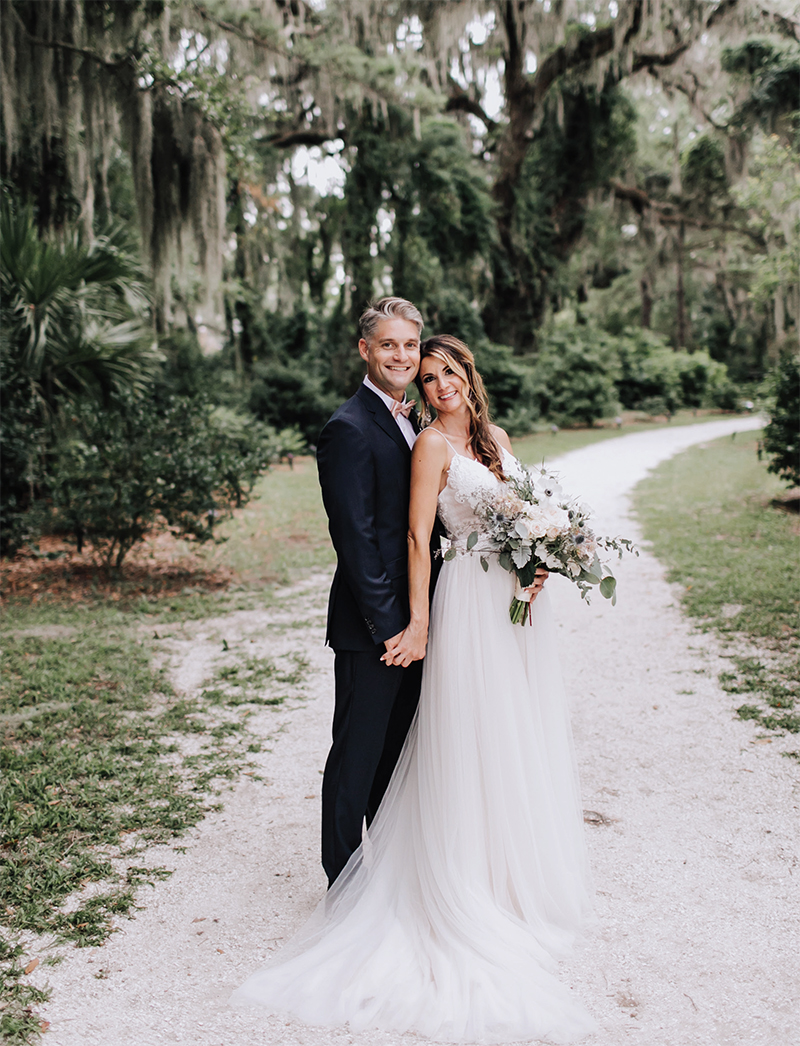 The couple finally got that first date — a dinner at May River Grill in Bluffton. A year and half later, they got engaged after a private proposal at home.

“Neither one of us like a lot of attention, so doing it at home was perfect. Doug said that the ring had been burning a hole in his pocket,” Ashley said. 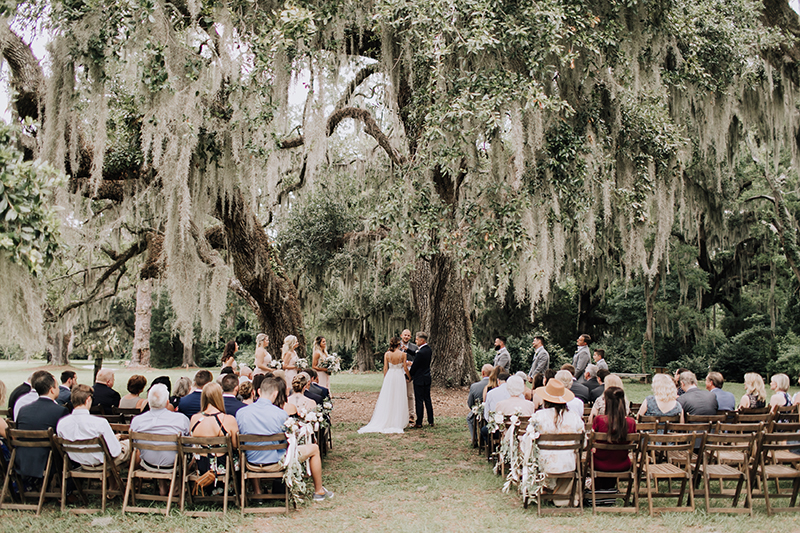 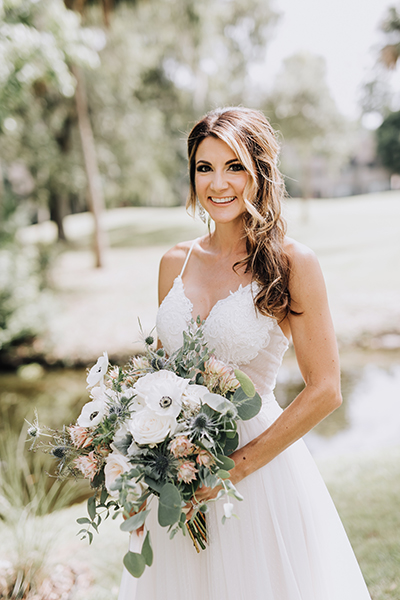 DOUG AND I LOVE TO DANCE BUT, THIS TWO HOURS OF DANCING FELT LIKE 15 MINUTES.

Before any wedding details had been decided, Doug and Ashley knew one thing for certain: They wanted everyone who came to have a lot of fun. With about 70 people from out of town set to attend, they knew creating a memorable weekend was the way to go. “The Wedding Weekend” was inscribed on their invitations, and the festivities ranged from a welcome dinner on Friday to a beach day with friends and family before the Saturday evening ceremony.

Underneath the Spanish moss and elegant oaks of Honey Horn, their June 29 wedding was the epitome of Southern charm. Their “month of” wedding coordinator, Karina Crockett, ran all the logistics for the day of with the vendors in the month leading up to the wedding, decorated the venue, and oversaw everything on Doug and Ashley’s wedding day. 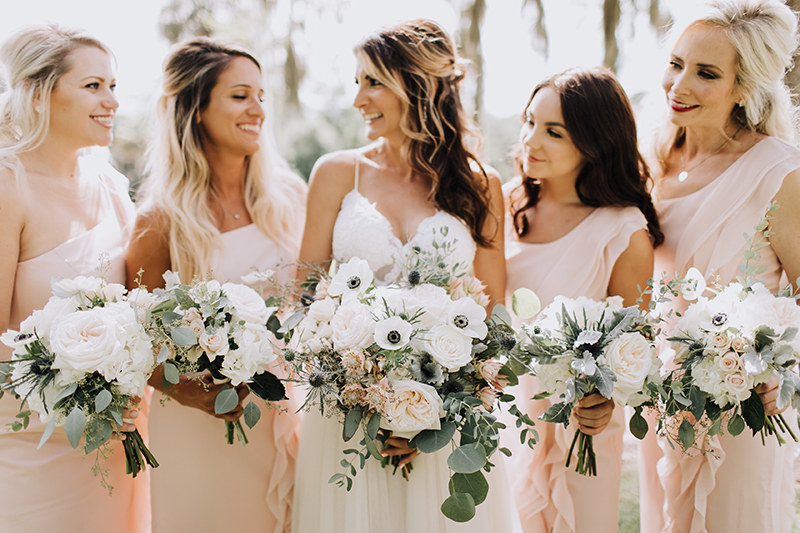 The small wedding party was dressed in gray suits and blush dresses. Ashley’s son Josh, 13, was a groomsman and her daughter Taylor, 16, was a bridesmaid. Doug stood out in a bold navy suit and colorful socks printed with flamingos, while Ashley stunned in her A-line Yaniv Persy dress, which featured intricate lace bodice details balanced with a simple and elegant train. It was perfect for a summer wedding. 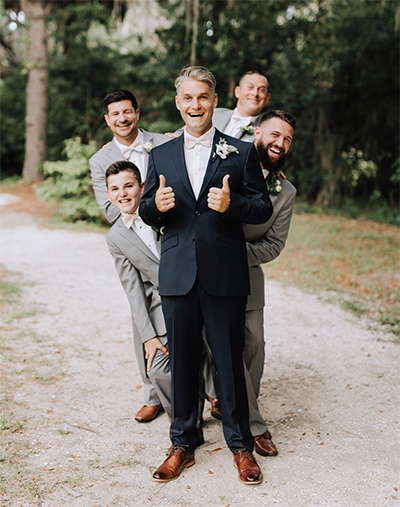 “I was indecisive about my dress at first because there was another one by the same designer that I also really liked, and everyone was split between the two,” Ashley said. “But after looking at pictures of both for a few days, I made my decision.”

With their focus on fun over formality, the reception was the highlight of the couple’s wedding. Beautiful flowers by Gardenias Event Floral set the stage.

Keeping with their Southern theme, Ashley and Doug served a casual meal of barbecue pork and smoked chicken with sides of coleslaw, macaroni and cheese, and salad, catered by Chris Johnson, owner of Beaufort restaurant Q on Bay. For dessert, the couple skipped the cake and instead offered an assortment of bitesized desserts and cupcakes made by Jeannie Johnson. 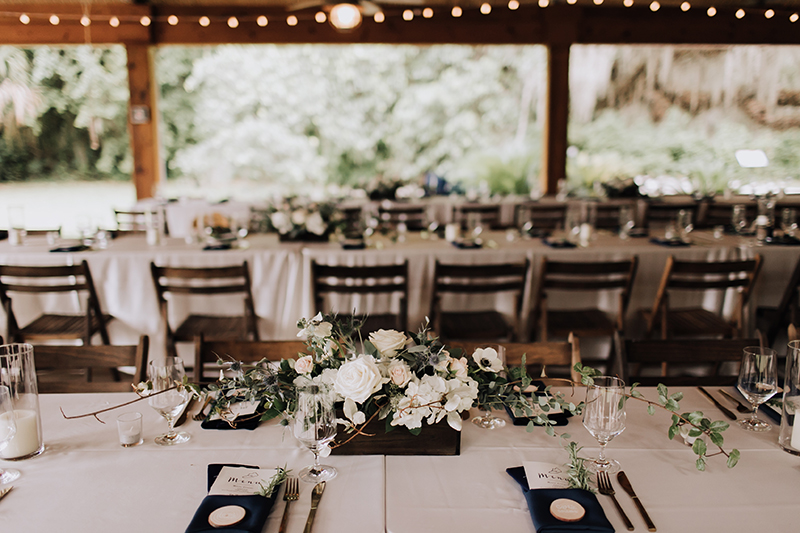 “The caterer was a no-brainer for us,” Ashley said. “Almost immediately after our engagement, Doug said to me, ‘Chris has to cater’. And I was in full agreement.”

Ashley and Doug chose to forgo some of the more traditional wedding and reception moments and headed straight into dancing following dinner. They were extremelyhappy with JLK Events and their DJ, Garry Lucca. 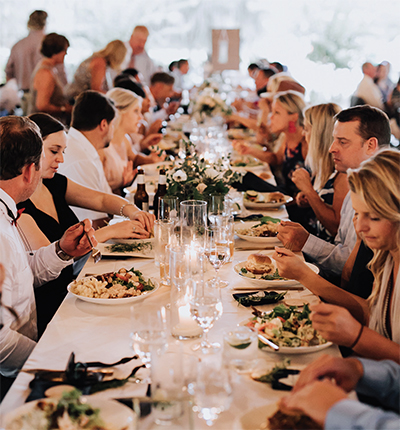 “Doug and I love to dance,” Ashley said. “But this two hours of dancing felt like 15 minutes.”

The fun did not end there for the newlyweds, who flew the next day to St. Lucia for an eight-day honeymoon, staying at both an all-inclusive resort and a private home overlooking the Pitons.

Looking back on their big day, the couple is filled with gratitude and joy.

“Everyone was so generous and thoughtful,” Doug said. “It was all better than we could have imagined.” 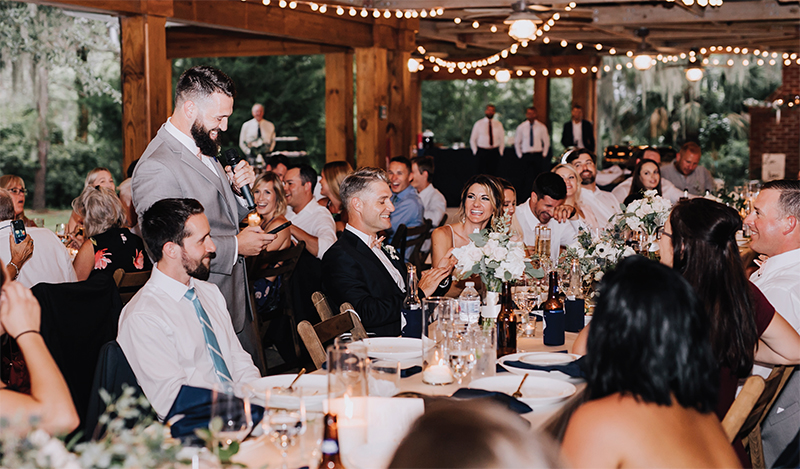