Leah Bloom’s 2017 wedding was notable for its familiarity as much as for its novelty.

“Growing up as a rabbi’s daughter, I had been to many, many weddings, and I had seen my dad do what he does best many times,” said Leah, whose father, Rabbi Brad Bloom of Congregation Beth Yam, married his daughter and her beau, Michael Miller, on March 19, 2017. The wedding took place at Congregation Beth Yam on Hilton Head. 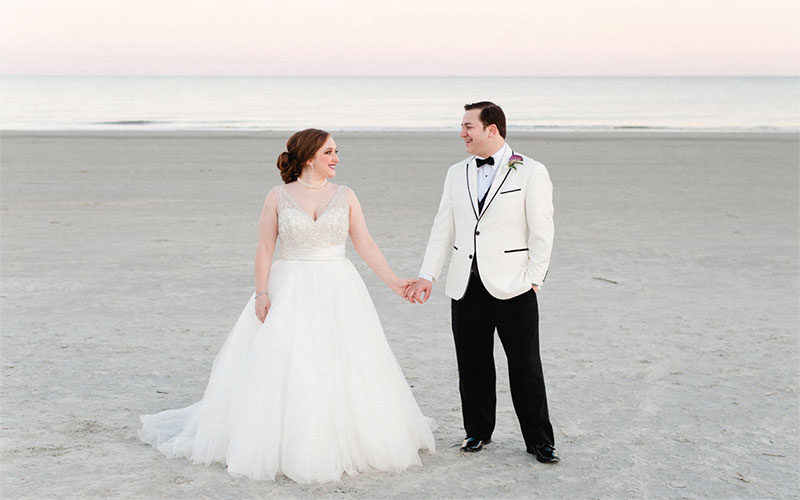 So how did her own ceremony stack up to the countless others she’d seen her father officiate over the years?

“The ceremony was beautiful,” she said. “My dad did his best work ever.”

Leah and Michael, who live in Maryland, had two priorities when planning their big day. The first is that they wanted an intimate atmosphere that honored the close family and friends who’d be attending. The second is that they also needed to honor the dozens of guests, some of whom of were virtual strangers to the couple, who would be a part of their day. Bloom’s entire congregation was invited. 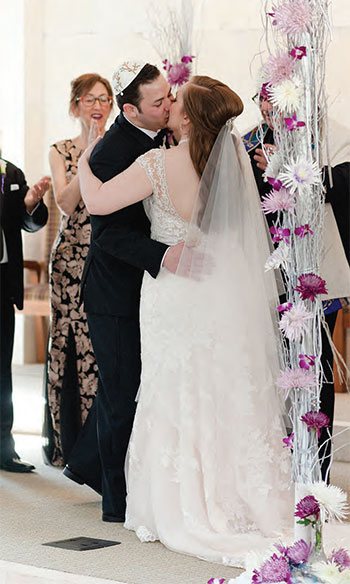 One unique way the couple decided to make this distinction was a wardrobe change for both of them. Michael changed his jacket between the wedding and reception, and Leah wore a champagne-colored fit and flare wedding dress with lace overlay to her ceremony and cocktail hour, which was attended by about 400 people. Then she changed into another wedding dress, a princess-style gown, for the more intimate reception of 200 guests, many of them traveling from as far as California and Arizona, where the groom’s family resides.

The festivities for those 200 guests began the day before the wedding on the beach, where the couple played games with their friends and soaked up the sunshine before sharing a rehearsal dinner at the Country Club of Hilton Head in Hilton Head Plantation.

“THE CEREMONY WAS BEAUTIFUL,” SHE SAID. “MY DAD DID HIS BEST WORK EVER.”

A highlight of the night was the groom’s cake, specially created by the groom’s aunt Abby Katz of Abby’s Addictions in Myrtle Beach.

“She drove from there with the cake in her car,” marveled Leah. “It had fondant symbols of things throughout our lives and relationship together.” Those symbols included the logo of the Jewish campus organization Hillel, where the couple met; Michael as a baseball player; and a Sun Devil, the mascot for Arizona State University, where both attended college. On their wedding day, the couple opted not to do a “first look.” “We wanted to savor the tradition of him seeing me walk down the aisle for the first time,” Leah said.

The bridesmaids, dressed in hues of purple – a bit of an homage to the bride’s parents, whose wedding colors were purple and silver – took their places before the bride made her entrance, arm in arm with both her parents, a Jewish tradition. 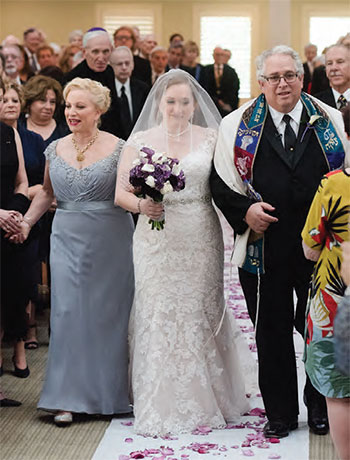 “And then when I saw Michael my face completely lit up.” Leah’s ivory gown’s lace overlay complemented the specially designed decorative chuppah—her mother Linda’s creative touch—under which the couple wed. The chuppah’s canopy had been created using parts from both the bride’s and groom’s mothers’ wedding dresses, and Leah’s mother had worn lace on her wedding day as well. Their ceremony was as touching as the bride had envisioned, with the couple reciting the vows they each had personally written.

“I knew the thing that would be the most difficult would be when the rabbi made special remarks to the couple,” she said. “I had to hold it in very, very hard to not cry. I knew that if I cried, I wouldn’t stop.”

During the ensuing cocktail hour, where a purple champagne cocktail was served, the newly married couple snuck off to Sunset Beach with their photographer, Whitney Boring of W Photography, for a few colorful photos and a romantic moment. 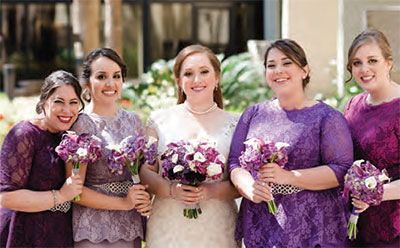 “They are the most amazing pictures, there was barely anybody on the beach and the photographer scheduled it perfectly,” Leah says. “It was just the two of us. We knew we would be with our families and bridal party pretty much the entire day, and we wanted that time alone to just savor the day.”

After a quick change for both bride and groom, and a “flawless” hair and makeup touch-up by Christine Sheffield of Makeup in the 843, it was time to party at Sonesta Resort Hilton Head Island. The newly married couple was introduced by members of The Fabulous Equinox Orchestra, who played “To Make You Feel My Love” while Leah and Michael took their first dance as husband and wife.

Then guests were treated to a sit-down dinner, choosing steak, fish or a vegetarian meal prepared by Sonesta Resort’s chefs. Leah and Michael bucked the usual bridal trend and were able to try all three delicious options. 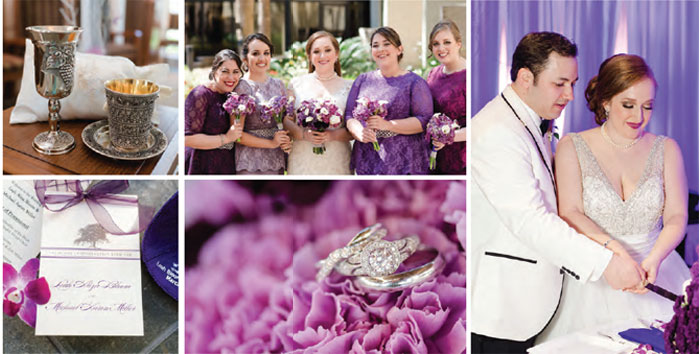 “Everybody tells you that you are never going to eat, and that was something we were very determined to prove wrong,” Leah says. “And we actually were able to have a good 20 minutes where we sat at a sweetheart table and were able to enjoy our dinner.”

“US BEING ANNOUNCED FINALLY AS A MARRIED COUPLE AND DOING OUR FIRST DANCE – THAT WAS A MOMENT I HAD IMAGINED A LONG TIME.”

After dinner, DJ Jamie Rosen with Hilton Head Entertainment took over and the party ramped up. Eventually, a gorgeous red velvet cake by Signe’s Bakery was sliced and served, and then the couple unveiled a special surprise for their guests: a Viennese dessert room that featured a cordials bar, petit fours and ice cream crepes made on the spot. “It was just outstanding, a huge surprise,” Leah says.

Overall, both bride and groom say the day couldn’t have gone any better. For Leah, simply having their marital status publicly declared was the true highlight of the day.

“Us being announced finally as a married couple and doing our first dance – that was a moment I had imagined a long time.” 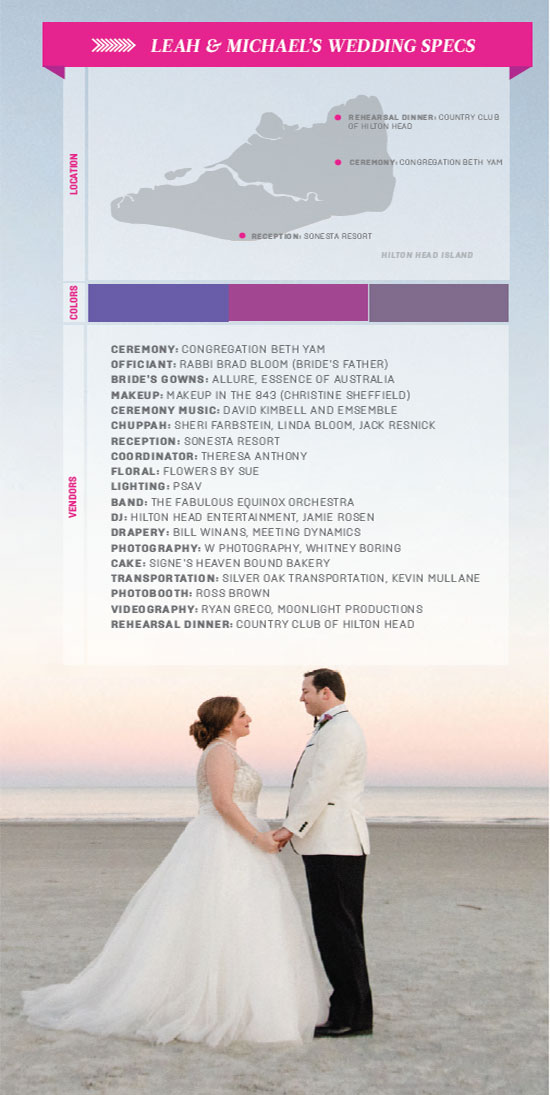 MAKEUP: MAKEUP IN THE 843 (CHRISTINE SHEFFIELD)