When you grow up surrounded by the beauty of the Lowcountry, your life’s backdrop is already the perfect wedding setting. And Halle Boni Keiffer knew it.

“I didn’t want a ton of decorations,” the Bluffton native said of her May 27 nuptials to Nicholas Keiffer. “I’m very, very simple, I just wanted lots of natural stuff.  I love the oak trees, the moss, the leaves. I love the blooming magnolia trees.” 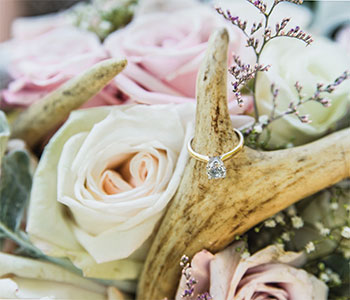 THE TWO FAMILIES WERE JOINED TOGETHER THROUGH A ROSE CEREMONY

The high school sweethearts took advantage of all the Lowcountry has to offer at their outdoor wedding and reception, held at Maurene Plantation in Hardeeville on a 95-degree day with love in the air but, thankfully, no bugs in sight.

For her big day, the bride wore a white fit-and-flare Allure Bridal gown with a sweetheart neckline and lace and rhinestone details.

“It gave me a modern-day Scarlett O’Hara feel, which is what I was going for,” she said of the dress, which she paired with a simple bouquet of greenery, light pink and white roses, and gold-tipped deer antlers — a personal touch that made perfect sense to the outdoorsy couple.

“We both fish and hunt and do all kinds of stuff together,” Halle said.

“They each got to pick their own dress as long as it was the same color and as long as it was long,” said Halle of the trendy mismatched yet complementary bridesmaid look. “I wanted everyone to be comfortable in what they were wearing.” 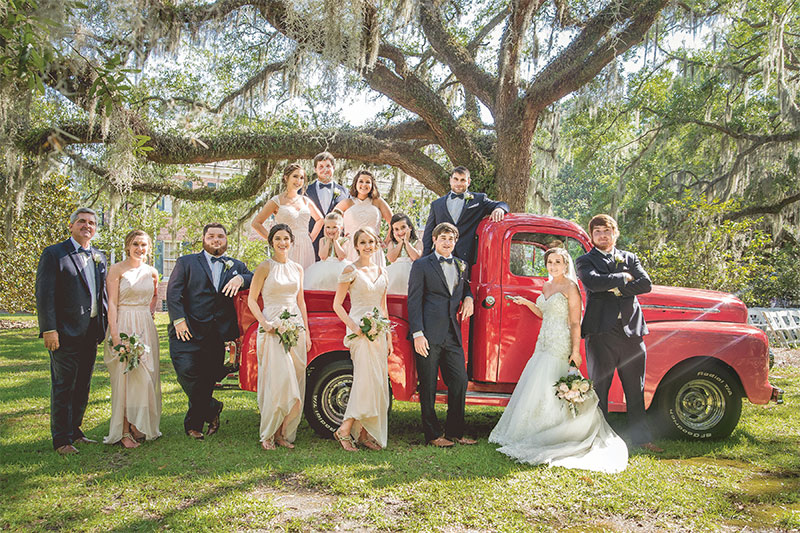 The men complemented the ladies in navy suits with suspenders and bow ties, while the groom opted to stand out with a traditional necktie.

The couple decided to wait until the ceremony to see each other that day, but the bride did a “first look,” of sorts, with her father – a touching moment she treasures.

“I’m really glad I got to have that special moment with my dad, because he’s definitely my best friend,” she said. And as a sweet homage to her late paternal grandfather, Halle’s father parked his restored classic Ford pickup just within view of where the couple would say “I do.” The bright red beauty became a fun photo backdrop for guests throughout the evening, Halle says.

To honor the groom’s side of the family, the couple read from Nick’s family Bible, which had been passed down through five generations.

“Our faith is such a big part of our relationship, so it was very special,” Halle said. The two families were joined together through a rose ceremony, for which immediate family members on both sides were given roses to contribute to one combined bouquet.

After the nuptials, guests were treated to a spread of Southern fare by Any Style Catering from Springfield, Georgia, which Halle said was a true highlight of the night.

“We had hardly any food leftover, because the fried chicken was amazing,” she said. “We had people getting second and third plates.” In addition to fried chicken and sweet tea, the menu included a loaded mashed potato bar, green beans cooked in brown sugar and bacon, a beef carving station, mac and cheese and a salad bar.

Later, a two-tiered lemon blueberry cake by Wicked Cakes was served, along with cupcakes made by LaToya Grier of Ridgeland. After watching Halle and Nick’s first dance — to Brad Paisley’s “Then” — guests joined the happy couple on the dance floor for hours of fun.

The bride said wedding planner Michelle Roberson with Improvisions of Grace in Savannah helped to make the day extra-special.

“She was a life-saver for sure,” said Halle of Roberson, who did the flowers as well as coordinated the look and feel of the day. “I wish I could relive it over and over again.”