For a bride who grew up in Sea Pines and a groom who hails from Louisville, Kentucky, the Harbour Town wedding of Megan Dolyniuk and Stewart Koch on May 7, 2016 — the same day as the famed horse race in Stewart’s hometown — was a destination wedding with a bit of derby celebration. 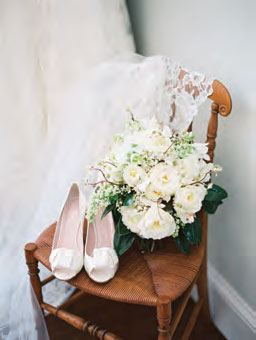 “We played off the derby theme,” says Megan of her wedding weekend, which incorporated a specially designed logo featuring a blending of the Harbour Town Lighthouse and the roses from the Kentucky Derby logo to create a unique visual statement that the couple used on everything from save-the-date cards to the koozies they gave as favors.

Megan and Stewart, who attended Furman University and had mutual friends there but didn’t begin dating until three years ago, when they were both living in New York City, filled their wedding weekend with much more than just the nuptials. The festivities began Thursday night with a beachside barbecue at Tower Beach Club hosted by friends of the couple. The welcome party set the mood for the weekend and introduced guests, who’d come from as far as China, Korea, France and Morocco, to the beauty and hospitality of the Lowcountry. 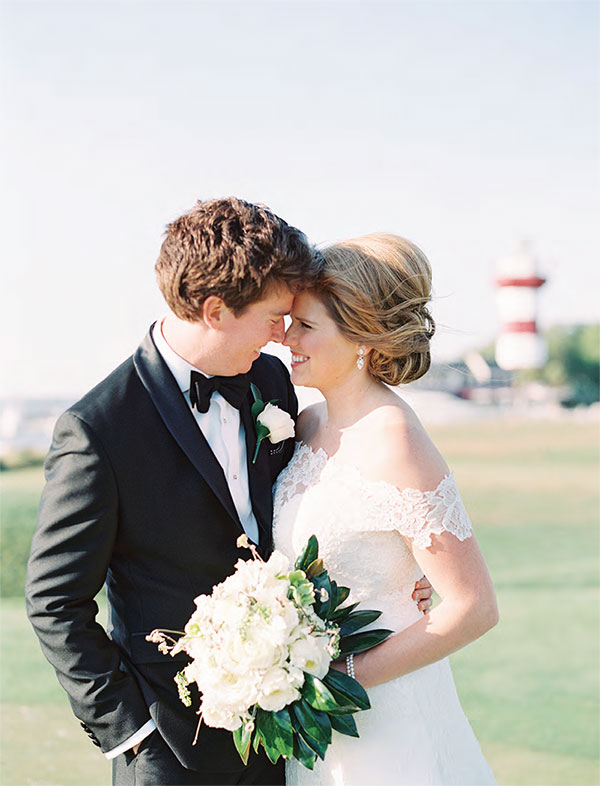 The following day, Megan enjoyed a bridal luncheon at Sea Pines Country Club with women on both sides of the wedding aisle while Stewart hosted a golf tournament with his wedding party and other guests at Harbour Town Golf Links. Their rehearsal dinner that night at Harbour Town Yacht Club was topped off by Stewart’s parents convincing the rehearsal party guests to join them in singing “My Old Kentucky Home” as an ode to the derby. 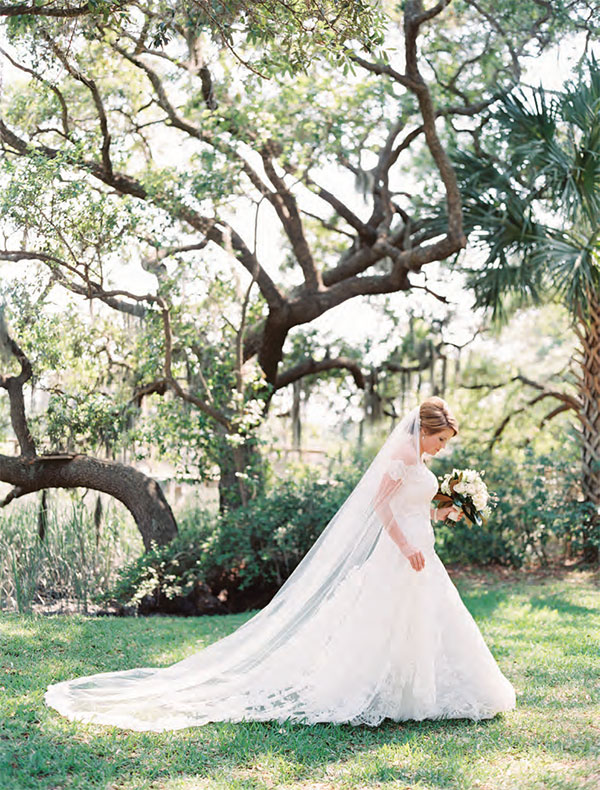 The couple’s wedding was held at 4:30 p.m. the following day at Providence Presbyterian Church; it was officiated by Megan’s uncle, Harold Warlick, a fellow Furman graduate who had married her parents and various other family members. 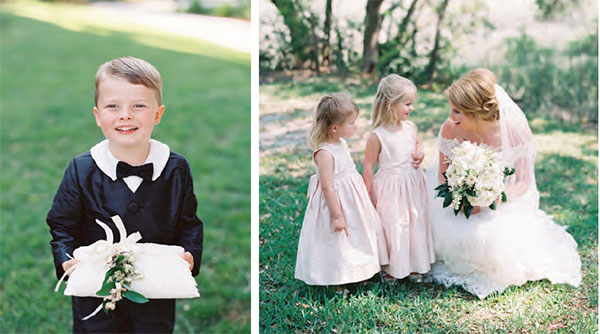 “(Megan’s) family has been longtime members of that church, so just being in the environment that’s been a part of their life for so long was a pretty big highlight of their day,” says the couple’s wedding planner, Kelli Corn of Kelli Corn Weddings & Events. “You could feel the warmth and energy while we were there.”

Megan was a vision in her off-the-shoulder A-line Anna Maier dress with lace overlay. “I just fell in love with the Chantilly lace on it, and the big cathedral-length veil finished it off,” she says. Her bridesmaids wore champagne-colored dresses and carried bouquets of pink peonies and white and pink roses created by Sue Burden with Lighten Your Burden. Stewart and his groomsmen wore their own traditional black tuxedoes. 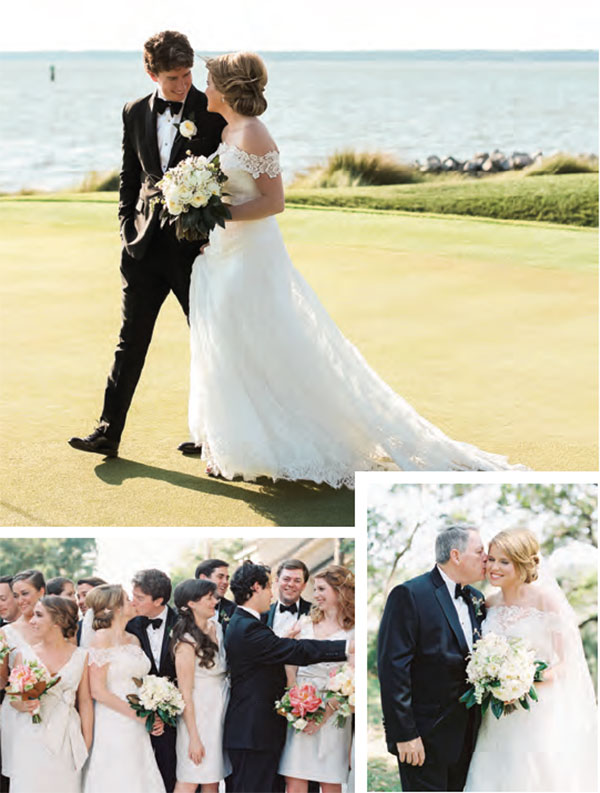 The couple opted to not do a “first look” before the nuptials, saving the moment for Megan’s entrance at the church.

“I really wanted to see him for the first time when I was coming down the aisle,” she says. “I think you lock eyes and you forget that anybody else is around. I know I did.”

The couple further personalized the ceremony by including readings from both of their parents’ wedding ceremonies. 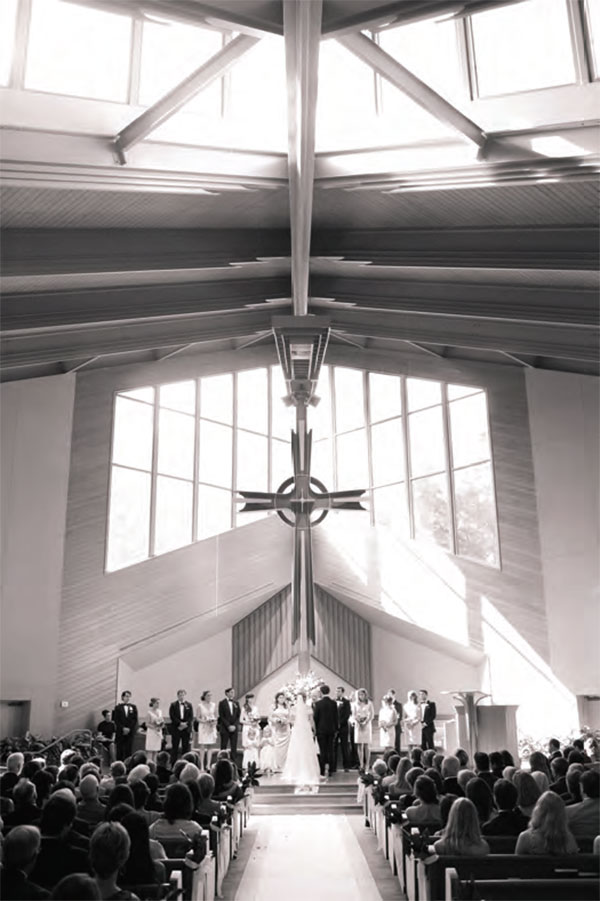 Afterward, guests made the short trip back to Harbour Town for an outdoor cocktail hour with entertainment provided by the six-piece Dixieland jazz band Savannah Stompers. It was during this hour that the newly married couple found a moment to savor their day.

“(Our) favorite memory is looking out and seeing all our guests having drinks and chit-chatting, having that panorama of all of them,” Megan says. “Weddings have become so rushed, so having that moment to really see everyone was so special.”

The reception itself was a true Southern party, with the couple’s wedding logo projected on the wall behind the band Deas-Guyz, who played Ray LaMontagne’s “You Are the Best Thing” for the couple’s first dance. The pair opted to serve a less formal buffet-style dinner in order to keep the party casual and extend the dancing. Highlights included Southern favorites like shrimp and grits, scallops, fried green tomatoes, and crab and avocado.

Dancing did stop briefly for the cutting of the cake, though.

“I was very, very excited about the cake,” Megan says of the four-layer confection made by Signe’s Heaven Bound Bakery, featuring two layers with lemon filling and two layers with caramel dulce de leche filling. “Plus, our neighbors had a blueberry farm so we served fresh blueberries with the cake, all on vintage cake plates Kelli found.” 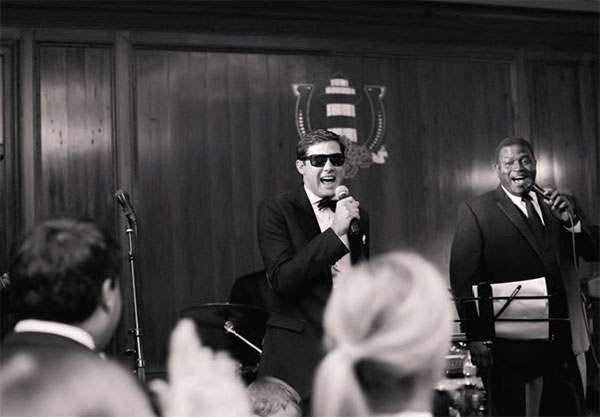 After hours of dancing and dining, guests sent the newlyweds off with rose petals before being treated to one last surprise: A food truck from Downtown Catering Company offering egg sandwiches, chicken biscuits and tater tots. The truck was a definite hit, sending the guests home with full stomachs and full hearts, Corn says.

“There’s nothing like a hot fried egg sandwich at midnight,” she says. 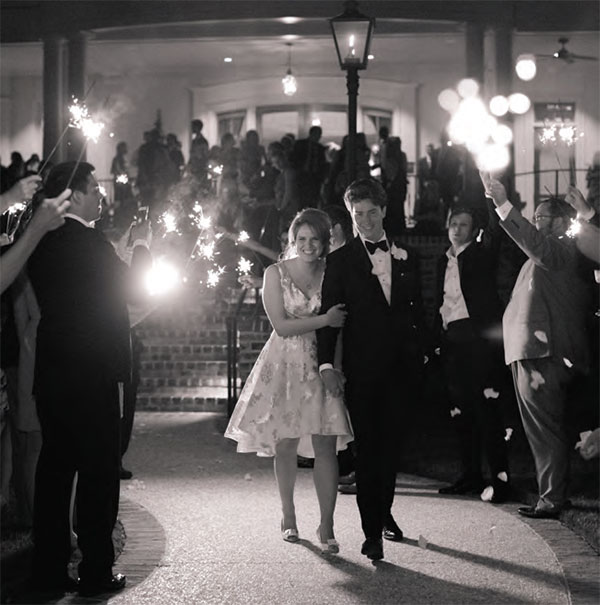