They may have married young, but Morgan Welch Blackburn, 21, and Robert “Robby” Blackburn, 24, had a pretty long courtship, considering.

“They were first kiss sweethearts,” says Amy Welch, who helped her daughter Morgan plan the June 11 wedding at Harbour Town Yacht Club. “They met in parochial school; she was in his little sister’s class and she fell in love with him at 12 years old.”

Morgan and Robby grew up in Bradenton, Florida, and today live in Colorado Springs, but they wanted to begin their marriage on the island that held some of Morgan’s best childhood memories. 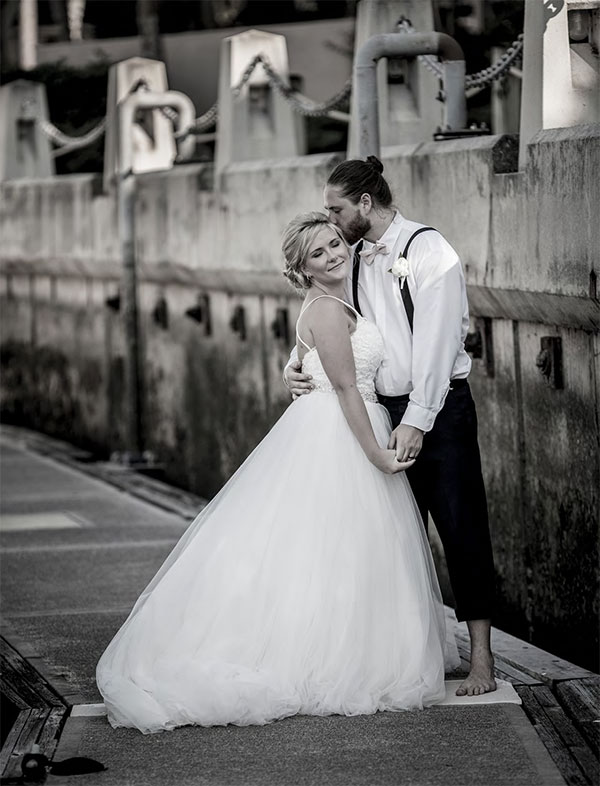 “We’ve been going to Hilton Head her whole life; we take all the kids every single year. So they decided on Hilton Head because they love it so much,” Amy says. “Plus Robby’s a tennis pro, so he’s been here for tournaments and stuff.”

The couple, who have a 1-year-old daughter, chose to make their wedding weekend an intimate gathering of close friends and immediate family.

“The whole thing was for Robby and Morgan. Only their siblings and their best friends from high school and college were invited; their core, core group. It was very ‘Big Chill,’” says Amy, who added grandparents and one aunt and uncle to the list at the last minute. “We told them, too, that these are going to be the people who stay with you through thick and thin for the rest of your life.”

Because the guest list was so manageable, everyone was able to stay in three Sea Pines condos, keeping the clan together to enjoy the pool and other amenities over the weekend.

“Riding bikes with 35 people is always fun,” Amy says, adding that Robby’s parents hosted a rehearsal dinner in a private room at CQ’s Restaurant the night before the wedding that was “phenomenal.” 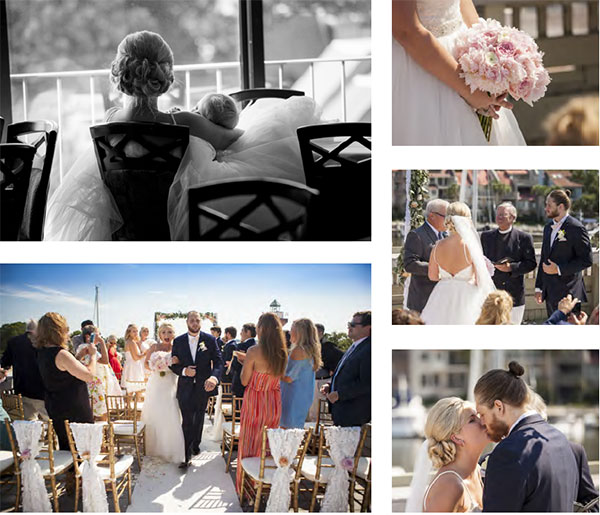 The late afternoon wedding, held on the fourth floor veranda of the Harbour Town Yacht Club, began when Morgan walked down the aisle on a sparkling 40-foot custom-made runner. “Morgan’s dad passed away, so she was given away by my longtime significant other, Lance McNeill,” Amy says.

Robby and his groomsmen stood waiting for the bride under the arbor created by florist Lauri Leber at The Flower Shop Bluffton. They wore blue Vera Wang tuxedos with white shirts and pink bow ties; the bridesmaids were in mix-and-match blush-colored dresses.

The couple wrote their own vows, making the ceremony extra special. Amy says the officiant, the Rev. Dr. David Leininger, also added a special touch to the nuptials. “He was amazing,” she says. 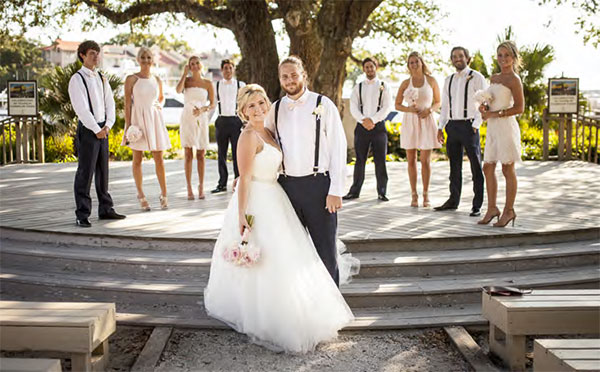 Musicians Harden & Crenshaw performed for the ceremony and stuck around for the reception. After the vows were exchanged, guests enjoyed a toast of pink champagne in glasses with gold sugar-glitter rims that coordinated with Morgan’s wedding colors, blush and gold, and with the wedding’s glam and glitter theme.

Finally, the wedding party and guests boarded The Spirit for an unforgettable sunset reception cruise on Calibogue Sound.

“It was so much fun,” Amy says. “We all lost our minds. Everybody danced the entire time. We had high-top tables, and everybody just mingled.” 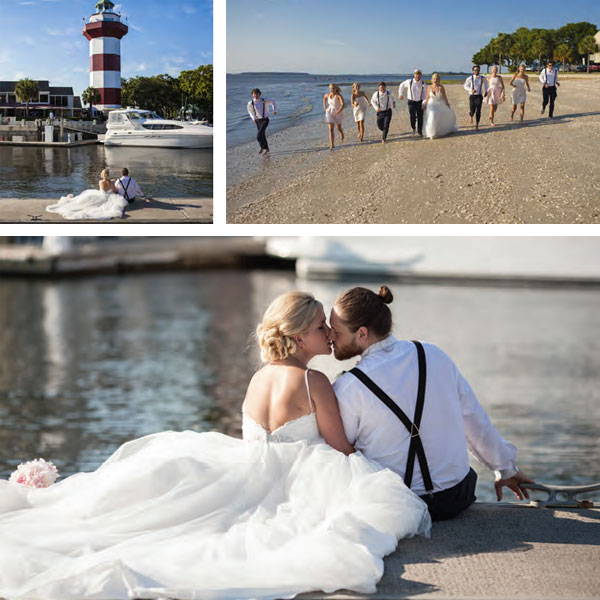 Heavy hors d’oeuvres were served, including chicken, fish and beef sliders, a raw bar with shrimp and oysters, sushi, and grilled vegetables.

“Everything just worked out so perfect,” Amy says of the sunset cruise. It was as warm as one would expect a June evening in the Lowcountry to be, and the groomsmen ditched their jackets early on, but otherwise the guests didn’t seem to mind the heat.

“We told everybody to dress for the weather,” she says. 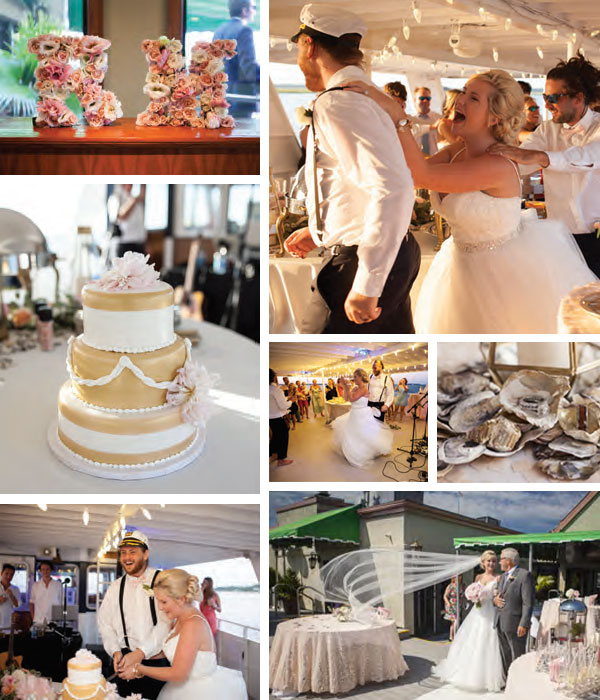 When the boat returned to Harbour Town, the wedding guests lined the dock to give Morgan and Robby a giant sparkler sendoff that ended the night in dramatic fashion.

“The sparkler sendoff was another really cool moment,” Amy says. “Everybody just loved it, we were all screaming and hollering, it was so festive. It was really cool.”

The following morning, Morgan’s family hosted a brunch at the Sea Pines Ocean Club restaurant, where guests relived the weekend’s festivities before going their separate ways. 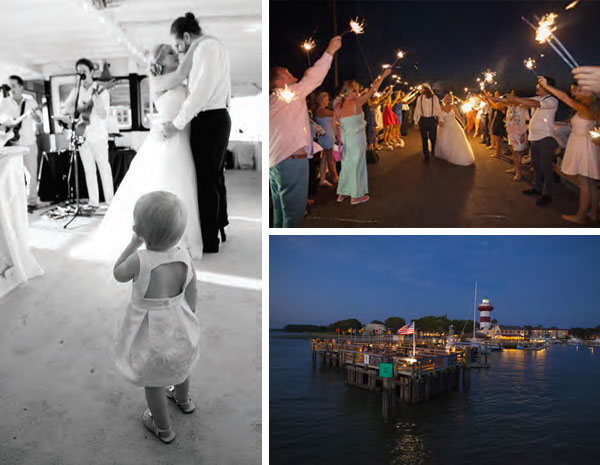 Amy believes they picked the perfect place for Morgan and Robby to start their married life together. “Sea Pines is so accommodating and so wonderful,” she says. “Everything turned out exactly the way we wanted it to.” 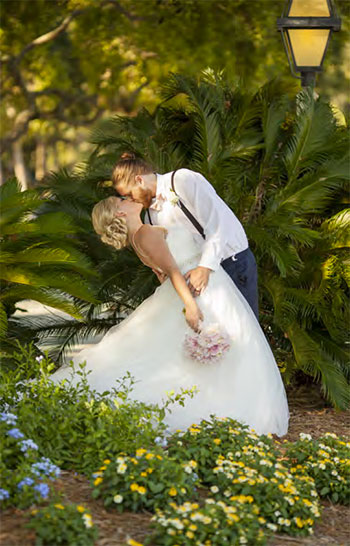