A kiss at the end of the rainbow

With every glance at the forecast leading up to her nuptials last March, Lindsay Finger thought she might be facing every bride’s nightmare: A rainy wedding day.

“The weather forecast called for stormy weather on March 14, and we even went to the extreme of renting a tent because it didn't look like the weather was going to cooperate,” says Finger, who married Hilton Head Island native Mark Finger that spring day at Belfair Plantation. “The morning of our wedding, I woke up, looked outside and saw the sun shining for the first time in three days.”

Not only did Mother Nature keep the nightmare from coming true, she actually sent a wedding gift of her own. 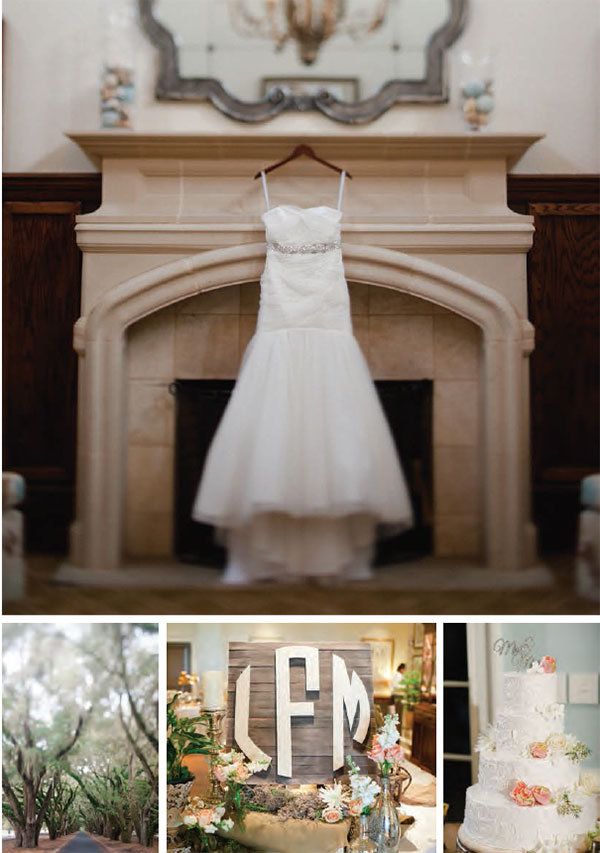 “Just as the wedding was beginning to start, a rainbow shot right over the wedding venue,” said Lindsay’s friend and wedding planner Geist Ussery of Geist & Company. “She could not have been happier. She glowed. She beamed. Everybody was happy.”

The Fingers wanted their wedding to have an understated elegance, a look Ussery pulled off using a variety of local plants and other elements.

“The wedding was at Belfair, so the bones of the place is Southern elegance, but they wanted a very Lowcountry chic feel,” he said. “So we did a lot of seasonal blooms — pear blossoms, palm fronds, hydrangeas — with pops of roses. We used a lot of greenery from the area, and implemented some rustic pieces like burlap and chalkboard, things that took this very sophisticated environment and gave it a casual feel.”

Lindsay agreed that having the wedding at Belfair was one of the best decisions they made. 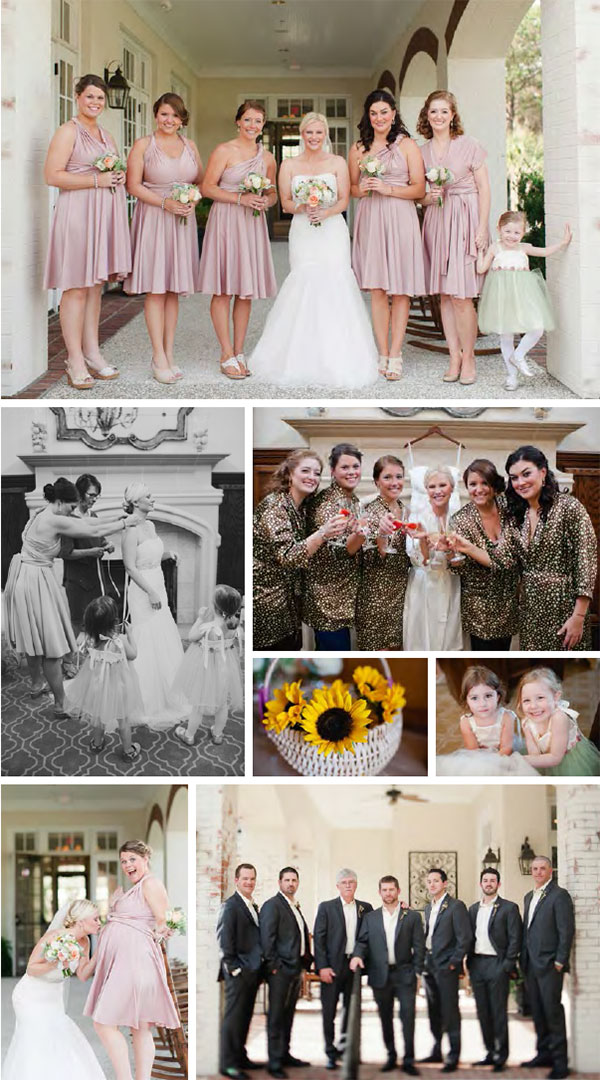 “The people at Belfair were wonderful, they provided a day-of coordinator for us, Millie Grimes, who took care of everything,” she said. “We couldn’t have picked a better venue.”

On the day of the wedding, Lindsay and her bridesmaids were treated to pampering by Justice Mellencamp of Platinum Design, who did Lindsay’s hair and makeup and all the bridesmaids’ hairdos, too.

A personal touch Ussery added to the event was the use of sunflowers, a nod to Lindsay’s Kansas roots.

“We included one large sunflower in Lindsay’s arrangement. And the mothers each got a matching sunflower. They both loved it and of course teared up,” Ussery said. “Also, the flower girls handed out miniature sunflowers as they went down the aisle.”

The guests arrived at 5 p.m. and were offered a drink before sitting down. One of the most touching moments of the day for Lindsay came before the ceremony even began, when Grimes ushered the bridesmaids and flower girls toward the ceremony site, leaving Lindsay alone with her father for a few minutes. 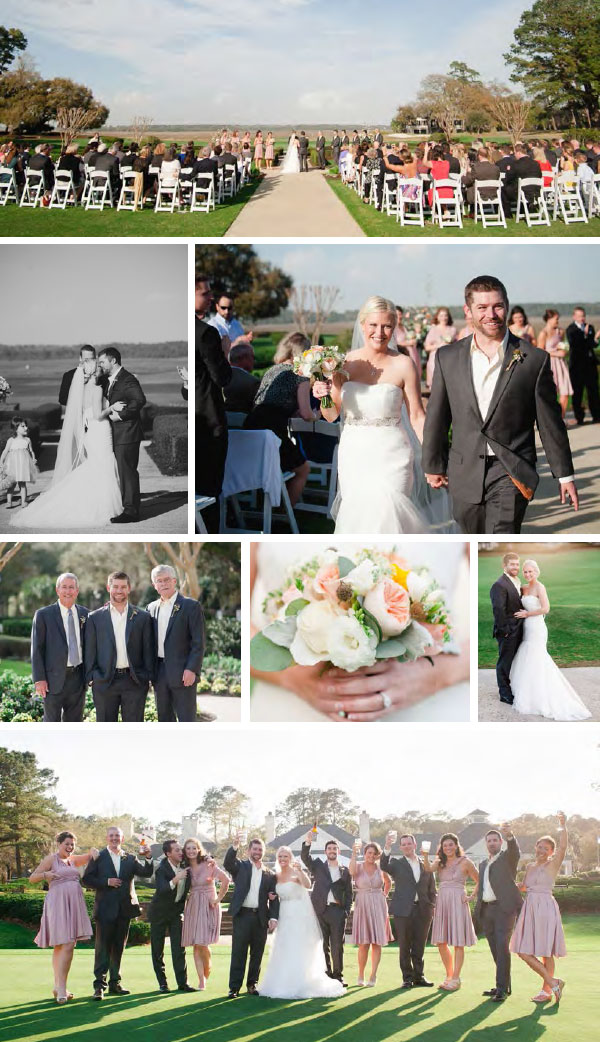 “There was a huge window that looked out over our ceremony. We could literally see everybody coming in,” Lindsay said. “I got to see Mark coming in, my bridesmaids and groomsmen going down the aisle. I watched it all and thought about how all those people were there for Mark and I. Seeing him first and seeing how nervous he was too was so special.”

Musician Whitley Deputy serenaded the crowd and played a beautiful song while Lindsay walked down the aisle, where one of their friends performed the ceremony. After the “I dos,” the couple walked back up the aisle to Stevie Wonders’ "Signed, Sealed, Delivered,” setting the mood for the party to follow.

Belfair catered the reception with stations of some of the Fingers’ favorite foods, including fajitas, sliders and mashed potatoes. The band Deas Guyz kept the crowd dancing — when people weren’t using the photo booth provided by DJ Motion Pictures — while wedding photographer Whitney Boring snapped pictures of all of the evening’s highlights. 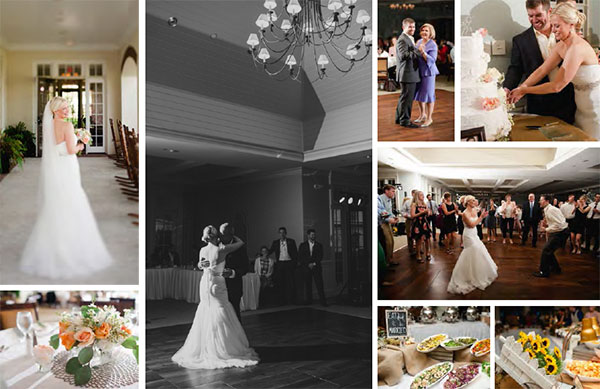 “Whitney Boring helped make our day,” Lindsay said. “We got back from our honeymoon and she had a sneak peek ready for us. There were instant tears, she captured everything so perfectly.”

Another person who captured everything just as Lindsay had envisioned it was Ussery, who gave her the Lowcountry wedding she wanted using a neutral palette of light peaches and pinks with grays and greens to make the colors pop.

“I had so many wonderful ideas in my head about what it would look like and how the day would go, and Geist was my No. 1 man throughout the whole process,” Lindsay said. “I walked in and was almost in tears, because it was seriously something out of a magazine. He had literally taken all my thoughts and put them in one room. It was absolutely perfect.”