Love in the Lowcountry

Allison Wessel and Nick Cuca wanted to treat their guests to an authentic Lowcountry wedding. Though Wessel grew up in the Lowcountry, her groom was from Chicago, where the couple lives, and for many of their guests, the wedding would be their first time on Hilton Head Island.

“We wanted to make it feel like you weren’t just anywhere, you were in the Lowcountry,” said Wessel, 28, a digital manager for the McDonald’s Corporation. “There’s no better place for that than Honey Horn. It being an outdoor venue was just perfect.” 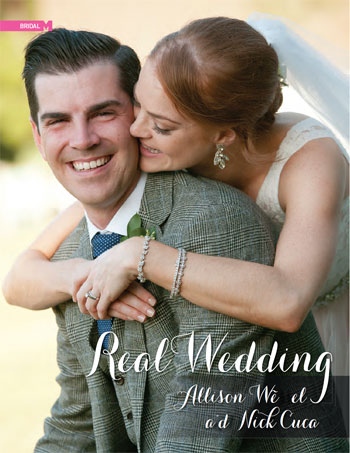 The couple chose Oct. 18 as their wedding date, hoping that the humidity would have lifted by then. They were in luck: Mother Nature provided their first wedding gift in the form of a beautifully sunny, 75-degree day with no wind and no bugs.

While Cuca, a golf pro, and his six groomsmen got ready for the big day, Wessel, her seven bridesmaids, both mothers and the sister of the groom had their hair and makeup done at The Hair Designers. Wessel’s stylist added some flowers to her hair, provided by Henry Kretchmer at The Flower Garden. Then Nick’s sister headed to the guys’ place, as she was serving as her brother’s “best woman.”

When guests arrived at the Coastal Discovery Museum at Honey Horn, they were greeted by a bar serving “Tipsy Tea,” an iced tea cocktail with lemonade and Firefly vodka, and were given wedding programs printed on bags filled with popcorn.

“That set the tone for a fun party ahead,” Wessel said.

The ceremony was officiated by Terry Finger, who had also officiated both of Wessel’s sisters’ weddings. Wessel and Cuca wrote the ceremony themselves and included several elements that made it uniquely personal. They had a writer friend write and read an original piece specifically for their wedding, and a musician friend played guitar and sang the Allman Brothers Band’s classic, “Blue Sky.” The couple likes the song so much that their wedding bands were engraved with some of its lyrics — his reads “my blue sky,” and hers reads “my sunny day.”

The couple then exchanged vows they each wrote themselves, a decision that Wessel says made the moment even more powerful and meaningful.

“I’m so glad we did it, because we were really able to speak from the heart,” she said. “It was lovely; I wouldn’t have done it any other way.” 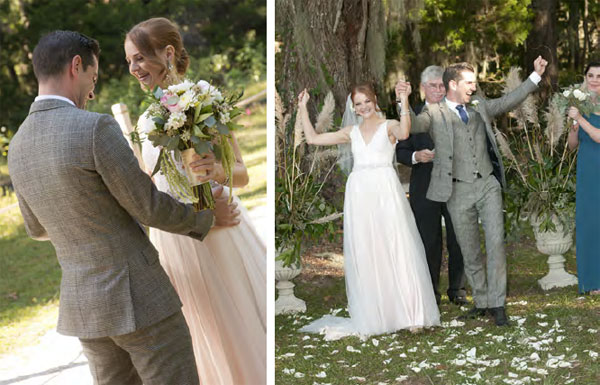 As a silly surprise for her groom, the bride had recruited a few friends to give out bubble guns to those seated along the aisle, so after the ceremony as the couple headed down the aisle hand in hand, streams of bubbles filled the air, delighting guests and making the celebratory moment even more festive.

Photographer Rob Kaufman had been able to get many of the posed portrait pictures of the wedding party done before the ceremony, so the couple moved rather seamlessly along with their guests to the cocktail hour and reception. Large urns of pampas grass arranged by Kretchmer were moved from the ceremony site to the reception area, which had been beautifully created by Affairs to Remember, with lighting touches by Mike Wood at Hilton Head Event Lighting. Celebrations Catering & Events prepared a buffet dinner of traditional Southern dishes, which the guests devoured. The food included a Lowcountry boil, pulled pork sandwiches and Wessel’s personal favorite — lots of different kinds of biscuits. 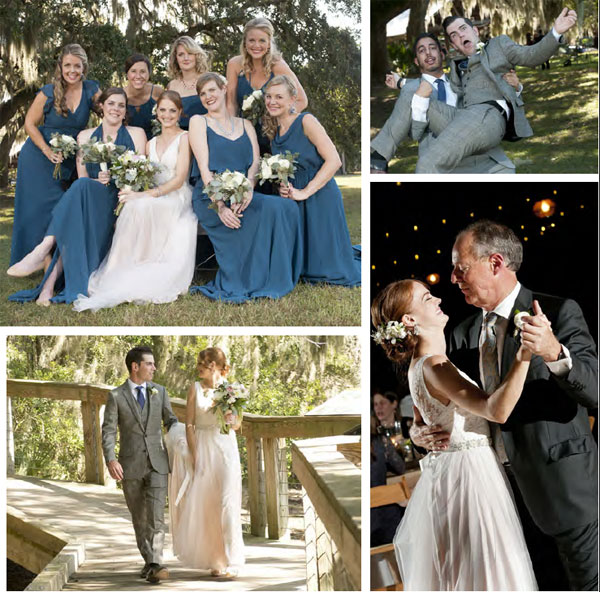 “It was so good, everyone raved about the food,” she said.

After watching Wessel and Cuca dance to their wedding song, “Simple Song” by The Shins, the happy couple and their loved ones danced the night away to the sounds of Super Deluxe, a party band out of Charleston. “At some point, the bubble guns made it onto the dance floor,” Wessel said with a laugh.

Instead of serving traditional wedding cake, the couple had Celebrations start a bonfire and set up a s’mores station, giving their guests a unique and casual treat after dinner was done.

Wessel says the night was perfect from start to finish, but the exchanging of vows was the highlight for her.

“It just really made it all seem so real and made it much more meaningful than just a big party,” she said. “Our initial focus was making sure everyone had fun, but I think on the actual day, just standing there exchanging vows, looking at our friends and family and seeing how happy they were for us, was just amazing.”