OUT OF TRAGEDY COMES A SECOND CHANCE AT LOVE

The Lowcountry is a small community where lives intersect in wonderful and terrible ways. For example, take Bluffton resident Daniel Harms, who was battling cancer in the summer of 2017 when he and his wife, Holly, heard about a three-car accident on Buck Island Road that took the lives of local teacher Jesse Floyd and her unborn son, Eli.

Daniel was overcome with emotion after hearing of the tragedy. He didn’t know Floyd’s husband, Ryan, but he told Holly that he could feel his pain. 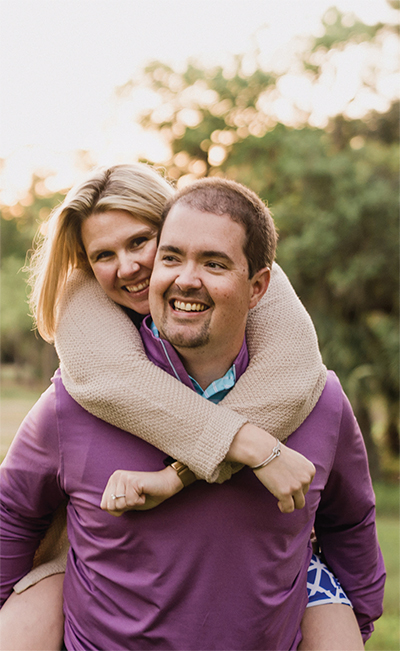 Who could know that Ryan Floyd would one day bring joy and hope back into the life of Daniel’s grieving widow?

Holly wondered how she could survive the loss of her husband.

“When Dan passed, I had an almost 2-year-old and a 3 1/2- year old,” Holly said. “I was all alone with just the two of them. … I had to deal with his death in my own way, but at the same time I still had to get up and take care of two little kids who depended on me.”

Both the Floyds and the Harmses attended LowCountry Community Church, where Ryan plays guitar on the worship team. Holly knew Ryan’s story, and Ryan had been told about Holly’s loss. Their paths had crossed, but it wasn’t until August 2018 that the two finally met at a GriefShare bereavement group meeting. Ryan was one of the leaders of the program at his church.

“I was just amazed at her story and her strength of how she survived through what she did,” Ryan said about his first impression of Holly.

Ryan, now 35, and Holly, 34, were the two youngest people in the group and immediately recognized they had a lot in common. Others in the group had been married for decades and death had come at the end of a long life, while Ryan and Holly only had a few years with their spouses when tragedy struck.

The two began talking about their losses and became good friends. Eventually, that friendship turned into love, and the couple was married June 25 at the Beaufort County courthouse. 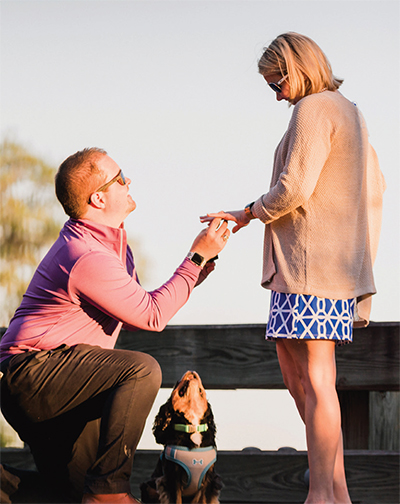 They had considered having a larger wedding with friends and family but decided not to wait. Their spouses’ untimely deaths taught them that no one knows what tomorrow will bring — or if there will even be a tomorrow.

“As tragic as both of our circumstances were, I know all of it was a part of (God’s) master plan,” Holly said. “We were both made to endure the pain of grief so that we could then experience the joy that comes after.”

After the crash, Ryan decided he would not mope around feeling sorry for himself forever. He went to counseling and came to terms with the fact that he had an amazing marriage and if he never met anybody else, he would be OK.

Ryan chose to live his life in a way that would make Jesse and Eli proud. In that first year after the crash, he rode his stationary bike the equivalent of biking across the country and back. He got his dog, Bailey — who survived the crash — certified as a therapy dog. The last — and toughest — thing Ryan chose to do to make his family proud was getting back on the worship team. Jesse used to love watching him play guitar at church.

Ryan is a teacher at Bluffton High School, and Holly is a special education nurse at Michael C. Riley Elementary School. The couple hopes their story will encourage people to stay faithful and be reminded that God will always provide.

GriefShare, a faith-based recovery group, will meet from 6:30 to 8 p.m. Mondays from Sept. 9 through Dec. 2 at LowCountry Community Church in Bluffton. For more information or to register, call 843-836-1101 or go to lowcountrycc.churchcenter.com/groups/classes/grief-share.