When native New Yorkers Valerie and Patric Ruppel got engaged in 2017 and began planning their nuptials, they knew they wanted a destination wedding in a warm climate — but not the same setting as the beach, barn and big city weddings they’d attended. After a quick brainstorming session, they both settled on the perfect vision, and it was a place they’d been to before: the Avenue of the Oaks in Belfair, where Patric’s grandparents live.

“The landscape at Belfair and classic style of the clubhouse on the river was everything we wanted and more,” said Valerie of the couple’s May 12, 2018, wedding at Belfair.

About 120 guests traveled mostly from New York to attend the destination wedding. The whole weekend was a dream come true for Patric and Valerie, both 33, who met in the fall of 2015. 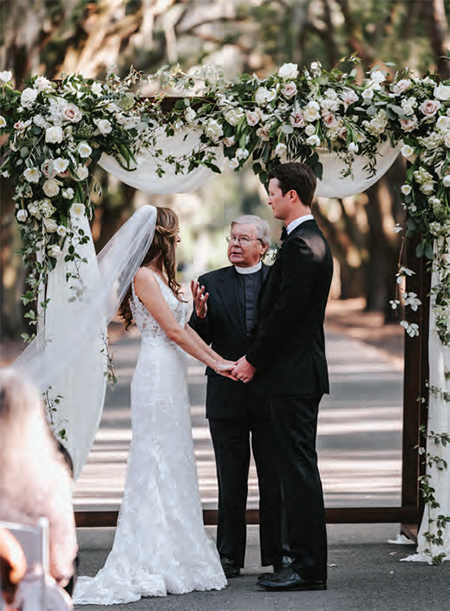 Planning for the big event took place via email and phone calls from the couple’s Huntington, New York, home. Valerie is a brand manager for Nature’s Bounty and Patric works in shipping consulting.

Their celebration began with a rehearsal dinner party at Rose Hill catered by Bluffton BBQ. The wedding was held the next evening right on the Avenue of the Oaks, as the couple had envisioned.

“It was so pretty,” said Valerie, who wore a mermaid-style Lazaro lace gown with a deep V-neck, a long train and a cathedral veil. Her groom stood out in a traditional tailored black tuxedo, while the bridesmaids wore oyster-colored gowns whose hue complemented the Spanish moss draped above them.

“I loved that neutral look,” Valerie said. “I wanted everything to be white and neutral.”

While she let the grandiose oaks provide most of the ambience, she added to the greenery with a large bouquet that included white peonies, hydrangeas, tulips, Queen Anne’s lace and quicksand roses.

“I wanted a huge bouquet. I know the rule is to not have anything bigger than a dinner plate, but I’m a flower person,” she said. “Gardenias Event Floral — they were awesome, very willing to work with me and give me what I want.” 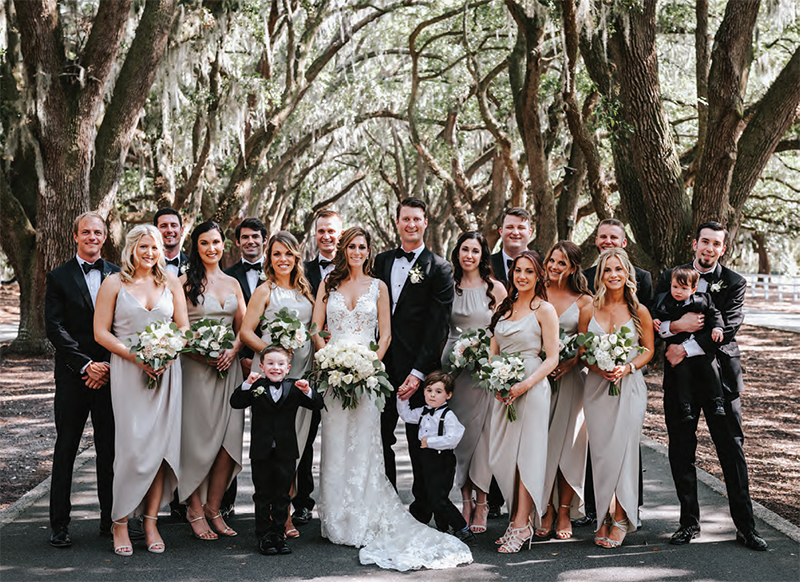 From the beginning, flowers had played an important role in Valerie and Patric’s love story, so making them a focal point of the wedding was only natural.

They were living together when Patric proposed in September 2017.

“One day I came home from work and opened the garage door, and there was a huge bouquet of hydrangea — they are my favorite — in the garage,” Valerie said. “I noticed a path of red rose petals that lead into the house. I immediately knew what was happening, and I followed the rose petals through the kitchen and into the living room where he was down on one knee.” 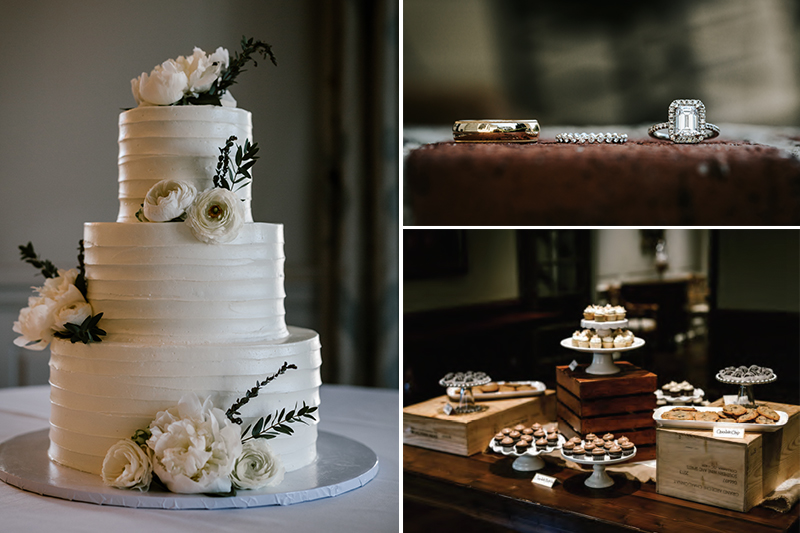 Flash forward 19 months and the couple tied the knot in a short and sweet ceremony, highlighted by the exchanging of traditional vows. Valerie said the majestic setting perfectly matched the moment. “I just remember being under the trees and thinking what a better place to do this than here.”

Afterward, a cocktail hour on Belfair’s manicured grounds gave the couple just enough time to slip away for a few photos on the 18th hole of one of the private golf club’s courses. Then guests moved to the clubhouse ballroom, where nine-piece band Right to Party played the couple’s first dance song, Billy Joel’s “Just the Way You Are,” before everyone settled in to enjoy a three-course seated dinner.

Then it was on to the dancing, which the band kept encouraging with what Valerie said was the perfect mix of old and new tunes. “They played so much more than what they had on their website,” she said. “I was so pleasantly surprised.” 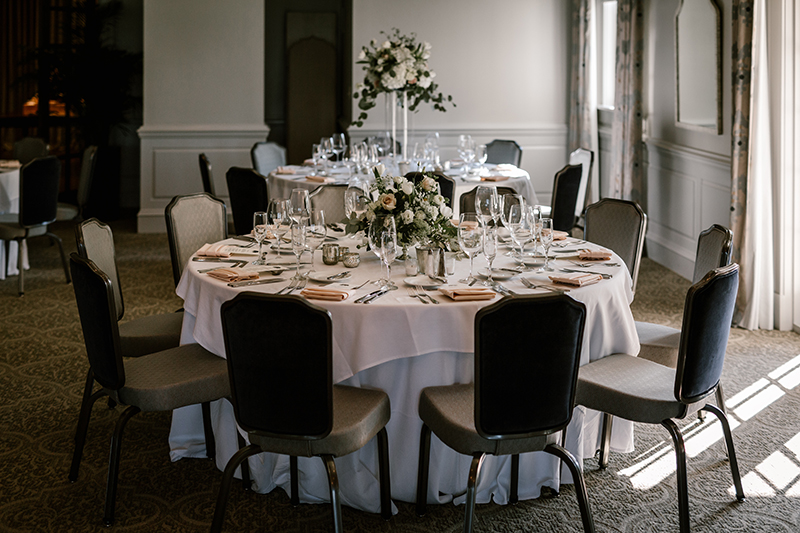 Just when the guests were ready to recharge, a large dessert table was unveiled, revealing gourmet cookies, cupcakes and Oreo truffles. That was all in addition to the three-tiered wedding cake by Custom Confections — the bottom a red velvet cake with cream cheese icing, and the top two layers chocolate with peanut butter buttercream.

The evening finished with more dancing for everyone — including the Belfair residents whose home inspired the whole event.

“Patric’s grandparents had such an amazing time,” Valerie said. “I don’t think his grandfather left the dance floor.” 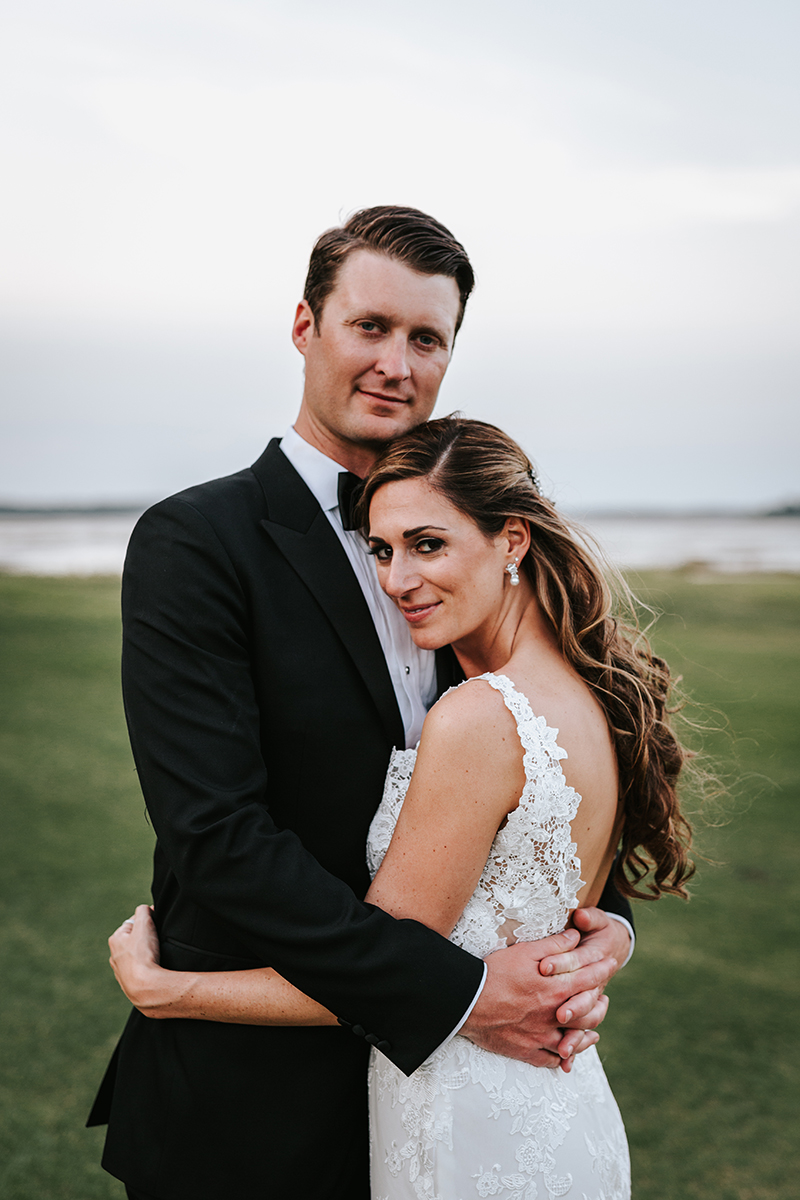 Capturing it all on film was photographer Terrell Martin of William Martin Photographer, who was “amazing,” the bride said. “He was very easy to work with, open to having tons of conversations beforehand; he really wanted to get to know us and know what we wanted.”

What they wanted was a more natural approach to documenting the emotions, actions and breathtaking beauty of the day — and that’s exactly what they got.

“I just think our wedding was the most beautiful wedding I’ve ever been to,” Valerie said. “The avenue of oak trees is what we really wanted. That’s the whole reason we got married down there.”