Anyone who knows Gina Jacobs knows she loves to cut a rug...

Since her husband, Rob, is a pastor at LowCountry Community Church in Bluffton, she gets to go to the weddings he performs, which ends up being seven or eight a year.

“When people ask Rob to perform a wedding, they say, ‘Hey, is your wife going to come?’” the Bluffton Middle School guidance counselor said.

They want her there because she gets other people out on the dance floor.

After one such wedding about six years ago in Shipyard Plantation, Jacobs was left feeling disappointed because the music ended so soon after it began.

“What kind of wedding is this?” she asked.

On their way out, the couple heard live music coming from an outdoor pavilion at the Sonesta Resort.

“We were already dressed, and I had only gotten to dance for a few songs,” she said. “And so we’re like, ‘Let’s do it.’”

It’s the kind of thing you’d see in a movie, except this time — sorry, ladies — Owen Wilson and Vince Vaughn are nowhere to be found, and the wedding crashers are not looking for free booze or one-night stands. 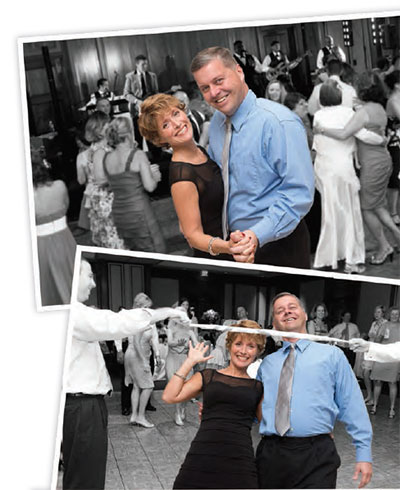 It’s all about the adventure and the dancing, Rob Jacobs said.

Another time, the couple were at a church event at The Westin Savannah Harbor Golf Resort & Spa when their teenage daughter and her friends came running in the room, saying, “There’s a wedding downstairs!”

Of course, Gina  had to check it out. So she went downstairs and danced for a bit. Since Rob was busy with the church event, Gina had to venture down on her own, which was a little nerve–racking.

To her surprise, some of the teens followed her and ended up getting kicked out. They weren’t wearing wedding attire so they stood out like sore thumbs. Plus, one of the teens went up to the bride and hugged her, which is apparently a big “no no” if you’re crashing a wedding.

When Gina saw the kids being escorted out, she went after them. Someone followed her outside and said everyone was asking for her. No one knew her name, but they were asking for her.

When the Jacobs were staying at the Marriott for their anniversary in 2013, they were walking through the nearby Westin in shorts and T-shirts when they heard music coming from the big ballroom.

They heard that a popular ’80s tribute band had traveled from Atlanta to perform at the wedding, and they knew they had to check it out. So they ran back to their hotel next door and changed clothes.

“We danced until midnight,” Gina said. “We had so much fun.”

Before the night was over, they left a gift for the happy couple — some photos of themselves from the photo booth.

The following year, on the Jacobs’ anniversary, there was a small wedding outside of The Westin, where they stayed for another romantic getaway. There were only about 75 people at the wedding, and there was no way to sneak into that one.

As they were walking by the reception, Rob started a conversation with the people at one of the tables.

“Hey, who’s getting married? It’s our wedding anniversary,” he said.

Without hesitation, a woman said, “Oh, let me introduce you to the bride.”

The bride was happy to talk with them. “Oh, we’re going to have some great food. Will you just stay?”

Then the mother of the bride insisted they join the party.

This one, as Rob said, was a crash — with permission.

The mother of the bride loved the Jacobs so much that she asked for Gina’s phone number so she could invite them to her other daughter’s upcoming nuptials. Gina hasn’t heard from her yet, but she’s hoping there’s another wedding on the horizon.

In the past, when the Jacobs have sought out weddings, they haven’t been able to find any. It seems the trick to wedding crashing is to just be in the right place at the right time.

The Jacobs are not worried about getting in trouble because they’re not there for freebies. They’re just there to dance.

“If you act like you know what you’re doing, and walk with confidence,” Rob said, “most people won’t say anything.”