Not every pair of newlyweds gets a restaurant menu item named after them. But not every couple’s love story is quite like Justine Hale and Nikola Milosev’s.

Justine and Nikola met in 2012 while both were working at Frosty Frog Café on Hilton Head Island. Justine was a waitress, home from college at the University of South Carolina. Nikola was spending the summer working in the restaurant’s kitchen as part of a travel program from his hometown of Zrenjanin, Serbia. The two hit it off and began a relationship that would eventually lead to them tying the knot at Honey Horn on Nov. 7, 2015. 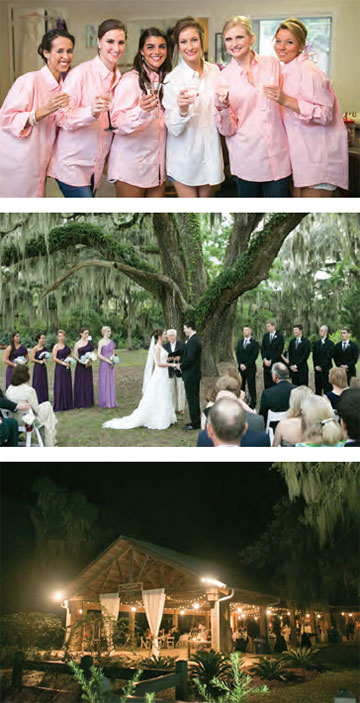 “When we met, we never expected to have it go anywhere. We thought it would be someone you meet over the summer and then say, ‘See ya next year,’” Justine says of their transcontinental romance, which has included multiple trips and extended stays in both countries. “It definitely wasn’t expected. But nothing in life really is.”

For their wedding day, the two picked Honey Horn for its natural beauty, and Justine says the ceremony setting was among her favorite things about the day.

“What I loved most about it being in Honey Horn was how intimate it was under the oak tree,” she says. “Everyone was right there.”

“Everyone” included about 100 wedding guests and 10 attendants in addition to the bride and groom. Though Nikola’s family was unable to make the trip, two of his friends from Serbia who were in the United States at the time stood by his side as groomsmen, along with Justine’s brother and two of her cousins.

The bridesmaids wore floor-length plum gowns and carried small bouquets of blue hydrangeas, while the groomsmen wore black suits and ties. One of the only, and most humorous, mishaps of the evening, Justine says, is that Nikola’s rented dress shoes started falling apart.

“Our wedding planner, Tracey Mancini with Celebrations Catering & Events, she was great and had duct tape with her, so she duct-taped the shoes together,” Justine says.

The weather briefly threatened to dampen the festivities, but other than a few sprinkles toward the end of the ceremony, the skies held.

“It was warmer than we’d anticipated,” says Justine of the late fall day. “We’d rented all these heaters and didn’t end up using them.”

Violinist Na You and her son, Bailey, played music for the ceremony, which Carl Schroeder, an old friend of Justine’s parents, officiated.

The ceremony itself did not include any Serbian traditions or readings, but the couple included the groom’s native language in signage for the reception. They also had a map of the world with a Polaroid camera available for guests to take selfies and tack them up on any area around the globe they wish to visit.

“We tried to tie in a travel theme with the reception,” Justine says.

They kept the table centerpieces and other decorations to a minimum, allowing the beauty of the Lowcountry to be the perfect backdrop for the festive night that unfolded under the stars. After a cocktail hour that included tomato soup with pimento grilled cheese bites, Justine and Nikola were formally welcomed as husband and wife. They danced to Ed Sheeran’s “Thinking Out Loud,” a popular wedding song, before opening up the dance floor to the crowd.

“I had done it before at a previous wedding while I was living in Serbia,” Justine says. “Nikola led everybody through it. It was kind of a mess, but it was fun.”

After dinner, a fire pit was lit near the pavilion where guests could eat s’mores and enjoy the evening. When it was time to end the party, the guests were given mini bottles of bubbles to blow at the happy couple as they waved goodbye and sped off — at least to the Honey Horn gates — in a loved one’s borrowed Porsche.

A few days after the wedding, the pair flew to Serbia to celebrate with Nikola’s family.

“We were supposed to take our honeymoon in Paris, but the terror attacks happened the day before we were supposed to go, so we canceled all of that,” Justine says. They ended up going on a cruise this summer instead.

Now back in the U.S. until January, both are working at Frosty Frog’s, where you can find them on the menu — Justine and Nikola’s Garlic Knots — as a fun nod to the café’s two longstanding employees who literally tied the knot.

Editor’s Note: We asked couples who attended Hilton Head Monthly's 2015 Hilton Head Bridal Show to submit an engagement photo for a chance to have their wedding featured in our magazine. Photos were posted to our Facebook page and readers voted on their favorite couple by "liking" the photo. With a whopping 2,306 "likes," the winning couple was Justine Hale and Nikola Milosev. Don’t miss the 2016 Hilton Head Bridal Show from 1-4 p.m. Sunday, Feb. 19, at The Westin Hilton Head Island Resort & Spa.