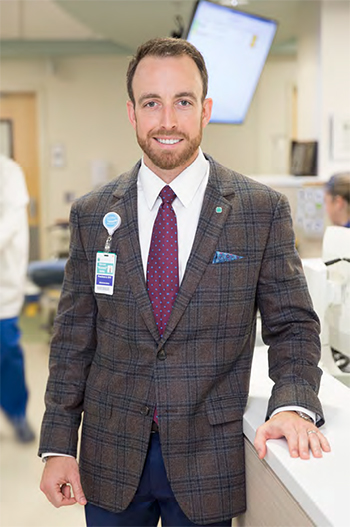 When Russell Baxley stepped into the role of president and CEO of Beaufort Memorial Hospital (BMH) three years ago, he quickly recognized his greatest challenge would be meeting the health care demands of a fast-growing community already short on providers.

Having served in a variety of executive positions at small- and medium-sized hospitals in South Carolina, Texas and Pennsylvania, the young hospital administrator knew all too well the problems posed by a nationwide shortage of physicians, particularly primary care doctors.

Determined to fulfill Beaufort Memorial’s mission to improve the health of the community, Baxley developed an aggressive strategy to recruit medical practitioners and to expand and improve the hospital’s brick-and-mortar sites.

To date, he has recruited 27 doctors, physician assistants and nurse practitioners and renovated a number of facilities on the main hospital campus, including the Keyserling Cancer Center and Collins Birthing Center. Currently, plans are in the works to update the OR in 2020.

But it’s south of the Broad River – the area experiencing the greatest population growth – where Baxley had devoted much of his efforts.

“The shortage of doctors has become so acute, it’s nearly impossible for new residents to get an appointment with a primary care provider,” Baxley said. “If you want to improve the health of the community, you have to provide access to primary care. It’s critical to preventing and managing chronic conditions like cardiovascular disease, diabetes and obesity.”

To that end, Baxley implemented an ambitious south-of-the-Broad capital improvement plan that includes the construction of several new facilities offering the full range of care for everything from simple ailments and injuries to complex cancer treatments.

WE’RE USING BRICKS, CLICKS AND PEOPLE TO CREATE BETTER ACCESS TO CARE FOR THE RESIDENTS OF BEAUFORT COUNTY.

May River Primary Care occupies the other half of the building. Its staff includes board-certified family medicine specialist Dr. Nikki Keisler, who was recruited to the practice from Palmetto Health Richland in Columbia.

In May, BMH broke ground on an even bigger medical complex on Okatie Center Boulevard. The 70,000-square-foot Okatie Medical Pavilion, which will replace Beaufort Memorial’s existing multispecialty offices in Westbury Park, will offer full-time primary care, OB-GYN and orthopaedics practices, a third Express Care location, and appointments with BMH and MUSC Health specialists.

“Not only are we bringing brand new providers to the market,” Baxley said, “patients will be able to see MUSC specialists without having to drive to Charleston.”

The three-story building, scheduled to open in the fall of 2020, will include outpatient rehabilitation, laboratory and imaging services, a breast health center and Beaufort Memorial’s second full-service cancer center, a partnership with MUSC Health and Alliance Oncology.

Baxley’s biggest endeavor south of the Broad is a $44 million micro hospital – the first of its kind in South Carolina – to be built on 13 acres near the corner of Buckwalter and Bluffton parkways. A joint venture between BMH and MUSC Health, the medical facility will include a 15-bed emergency room and 20 beds for acute care.

Along with the new facilities, Baxley initiated online medical services to further enhance access to basic health care. BMH Care Anywhere offers video visits with a board-certified health care provider 24 hours a day, seven days a week via smart phone, tablet or computer. Patients with minor ailments can access a practitioner in a matter of minutes at night, on holidays and weekends or anytime they can’t get an appointment to see their primary care provider.

Now BMH is taking the service into Publix grocery stores. A telehealth kiosk opened in September in the Publix in Buckwalter Place. In the coming months, the program will be expanded to all of the supermarket’s locations in Beaufort County.

“We’re using bricks, clicks and people to create better access to care for the residents of Beaufort County,” Baxley said. “As an independent hospital, we can be flexible and forge our own path.”