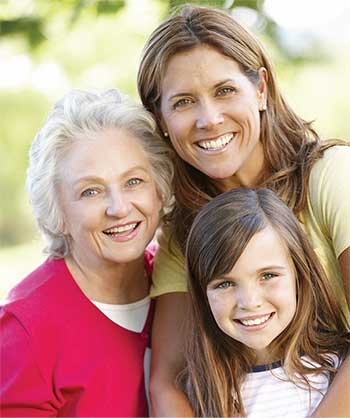 CARING FOR MULTI-GENERATIONAL FAMILIES IS A BALANCING ACT

You’ve heard of baby boomers — those born between 1944 and 1964, and who today are in their 50s, 60s and 70s. Gen X kids — those born from the late 1960s to the early 1980s, today are in their 40s and 30s, working full-time jobs and raising families of their own. And then, of course, there’s the millennial: born sometime between the early 1980s to 2000, today’s teens and young adults are defining their generation and igniting our nation’s love for avocado toast.

As life expectancies continue to grow and many adults remain active well into their twilight years, a new so-called generation is emerging: The “sandwich generation.”

Not restricted to one particular age group or birth year, the term refers to adults — typically in their 40s and 50s — who are raising their own young children while also caring for their aging parents.

It’s a balancing act, one that can be incredibly rewarding but also stressful and challenging. Many members of the sandwich generation work full time while also assuming the demands of being a full-time caregiver and parent. One of every eight Americans between the ages of 40 and 60 is both raising a child and caring for a parent, according to the most recent data from the Bureau of Labor Statistics. There are 40.4 million unpaid caregivers of adults ages 65 and older in America, and 44 percent of them provide help to their parents.

The majority of them have been providing elder care for less than two years, though more than a third has been assisting for five or more years.

And while 88 percent of respondents in a Pew Research Center study found the time spent caring for an aging parent “rewarding,” 32 percent called it “stressful.” As more people are living longer than ever before and old-age dependency ratios are increasing around the globe, experts say the sandwich generation is only going to continue to grow.

Data from the U.S. Census Bureau show that the number of Americans older than 65 will double by the year 2030 to more than 70 million, which will lead to a big shift in the makeup of the sandwich generation. While many baby boomers once cared for their parents while raising their families, today there are more members of Gen X in the caregiving sandwich than baby boomers, who are rapidly moving into retirement and living longer.

About 15 percent of people in their 40s and 50s are financially supporting their parents and their children, according to the recent Pew report. About 47 percent of those caregivers are caring for a parent while also supporting a child older than 18. Women comprise 66 percent of caregivers, but men are increasingly joining the ranks. And while pulling double duty like that can be an emotional strain, it can also hurt financially. The National Alliance for Caregiver and AARP reports that, with a national average household income of $45,700, many caregivers struggle to make ends meet or to find a job that allows flexibility. Only six in 10 caregivers report being currently employed. Among them, 56 percent worked full time; on average, they worked 34.7 hours a week.

Members of the sandwich generation often are forced to sacrifice their careers to care for their families, turning down promotions, scaling back hours or even leaving their jobs. Missed work days are common, as are workday interruptions. Caregivers working at least 30 hours a week are more likely to report having workday interruptions as a result of caregiving. One in six working caregivers are self-employed.

The total estimated aggregate lost wages, pension and Social Security benefits for these caregivers is nearly $3 trillion, according to a MetLife study in 2016. For women, the total individual amount of lost wages due to leaving the labor force early and/or reduced hours of work because of caregiving responsibilities equals $142,693. In total, the cost impact of caregiving on the individual female caregiver in terms of lost wages, pension and Social Security benefits averages $324,044. For men, the total individual amount in lost wages is $89,107, and $283,716 overall. U.S. businesses lose up to an estimated $33.6 billion per year in lost productivity from full-time working caregivers, the AARP study reports.