An old pair of blue jeans and two cherished shirts have been given new life and will now serve as keepsakes for a grieving family in the Lowcountry.

These simple items of clothing have been transformed into stuffed bears to offer the family some comfort after the death of their husband, father and grandfather. Dubbed “memory bears,” the stuffed animals have become a trend for people struggling through the loss of loved ones.

About two weeks after Hurricane Matthew hit Hilton Head Island in October, Jim Calfee was diagnosed with lung cancer. The cancer progressed quickly, and although the Hilton Head man did not want to spend his last days in the hospital, his daughter Jodi Watts said it was impossible for him to be moved at such a late stage. His family was in the process of making arrangements with Hospice Care of the Lowcountry when he died Dec. 4.

Shortly after Calfee’s death, someone with the hospice group reached out to his wife, Anita, asking if she would be interested in receiving some memory bears. She loved the idea. 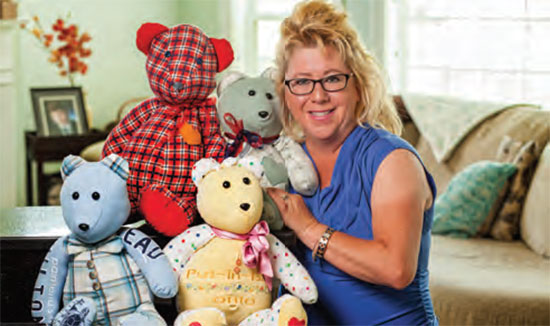 Enter volunteer Debbie Braun, the maker of the sentimental stuffed animals that Hospice Care of the Lowcountry offers to families of their deceased patients.

All Braun asks for is an item of clothing that is special to the family — Dad's favorite shirt or Mom's favorite bathrobe, for example — along with a few details about the deceased loved one. What was her favorite color? What were his hobbies? Once she has those, Braun spends some time planning her creation and then gets busy crafting.

It takes her about eight or nine hours to make each bear. She likes to take her time to really think about who the person was and what would be the best reminder for his or her loved ones.

"You’re trying to almost channel who that person was,” Braun said.

Braun makes anywhere from one to 10 bears for each family, depending on what they want. She has made more than 100 memory bears so far, and she remembers every single one.

Each bear has a heart on its bottom and its chest. Braun also tries to incorporate any special requests — for example, one family asked if she could add butterflies to the bears.

For the Calfee family, Braun made sure that each bear featured denim and yellow, two of Jim’s favorite things to wear.

As a licensed professional counselor, his daughter knows the importance of having a tangible item to touch, which can be comforting to people grieving a loss. 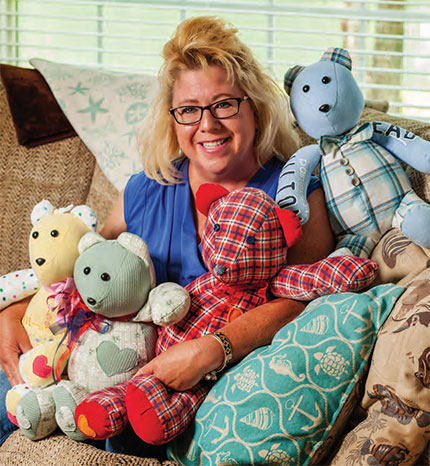 "It just brought such joy,” Watts said. “It was just so lovely to be able to feel that warmth of his shirt in a stuffed animal and to have it there present whenever you need it."

The Calfees received five bears: one for Anita, one for both of the Calfees’ daughters, one for a niece and another for a granddaughter.

Watts said her 8-year-old daughter, who was especially close to her grandfather, sleeps with her memory bear every night.

"It just gives people something to hold onto when they can no longer hold their loved ones,” Braun said.

Braun knows that firsthand. She began making the bears after her mother became ill in 2008. That’s when she realized how therapeutic they could be — not only to make, but also to keep as a memento.

Before moving to Bluffton four years ago, Braun began making the bears for a hospice in Ohio. When she arrived in Bluffton, she knew she had to keep crafting the treasured gifts.

“I do think it makes a difference in people’s lives,” Braun said. “It brings happiness. It’s a little hug, just a different type of hug.”